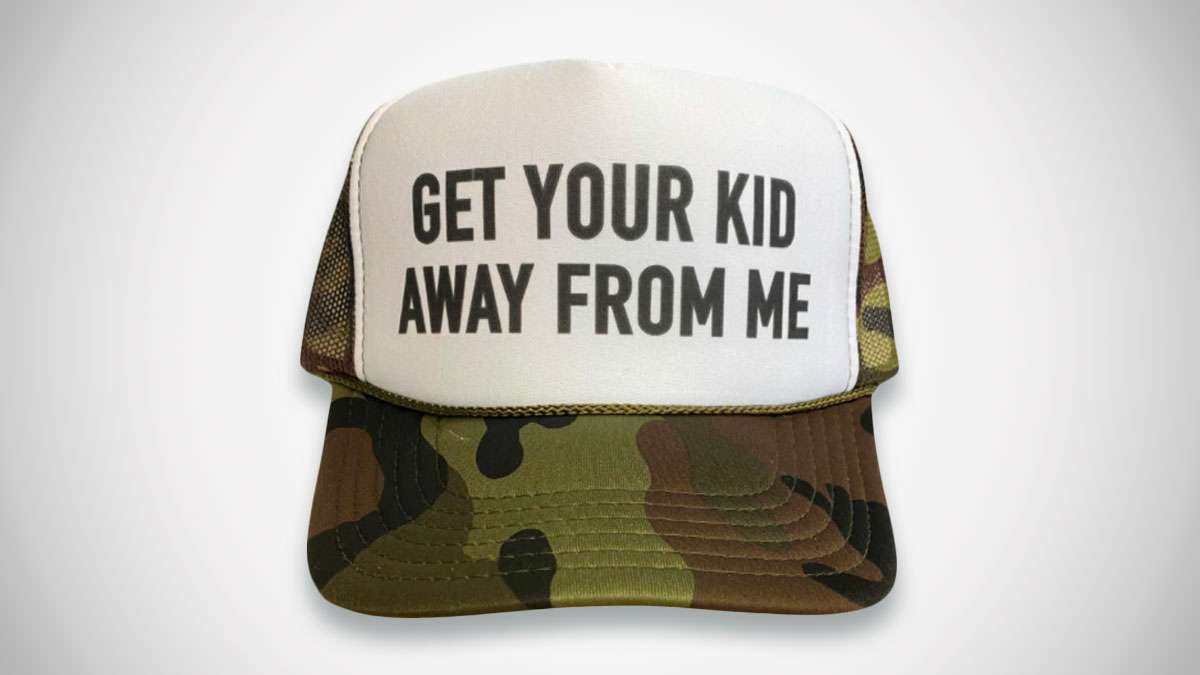 Inappropriate Trucker hats run the gamut of inappropriateness in both potency and topic. We start with "This Band Sucks" and "I Hate Working Here," and end up at "Stop Staring at My FUPA," "I Bleached My Asshole for This," and "I'm Here to Fuck Your Dad." Ouch. (Unless, of course, you're Dad!)

Uncle Bekah has dozens of Inappropriate Trucker Hats to choose from, each available in your choice of colorways. You can also request a custom printed trucker hat with your own design and inappropriate statement.

Muchas danke to Christine H. for the Dude Product Tip.

Two notches on a baseball hat equals one notch on Notch's belt for ending the war between sunglasses and billed caps. Notch sunglasses-friendly hats have patented cutouts on either side of their bills that enable them...

This Human Face Baseball Hat is ready to play ball...with anyone who thinks they can look it in the eye without shuddering. Yeeks. Every time I glance at Sabri Tunca's handmade creep fest, I have to shake it off like...

Become a real head case! I don't know how comfy-cozy it would be to use a Cache Cap to stash your valuables, survival gear, or EDC - what are those, fishing hooks and a SAK blade in the photo? - but the idea is sure cool...

Hat-Headz Clip Hanger hat rack is apparently enough of a requirement in baseball cap-wearers' lives that the company is on their v4.0. Four iterations of webbed straps dangling from doors to secure, organize, and display...

Fitted with 5 LED lights on the center edge of their bill, these baseball caps add hands-free illumination and versatility to any number of activities indoors and out. ... Presuming with the indoors part you're not around...

Whalecum, my friends. We have nothing but whalecum for you in this house. Spermy the Whale gives a gushing "Hello!" to all guests who cross the threshold in this delightful Whalecum Mat...

The Disaster Novelist: The 10 Worst Books Ever Written

No, smug smarty pants, I haven't read every book ever written, so I can't say with absolute authority that these are the 10 worst books ever written. But I, along with hundreds of your peers reviewing them on fine online...

Who's ready for some DINK humor? Etsy shop Living Childfree's decals, T-shirts, and mugs join the contemporary American phenomenon of expressing one's every belief, contention, and sentiment on a clever sticker, piece...

This is the world's smallest violin, and I'm gonna play it just for you...whiners! So many whiners! At work. On the road. At the checkout line. In my inbox. And the biggest one of all: right there in my bathroom mirror...