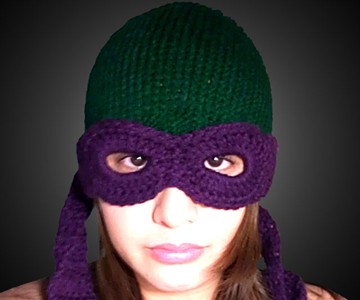 If given the choice between the Teenage Mutant Ninja Turtles Bra and Miss Pamela's Ninja Turtles beanie, most men would probably choose the beanie for themselves and the bra for all ladies. But not me. I would choose the beanie for everyone. Because at least if a lady is wearing this Ninja Turtles hat of stealth and cowabunga, I will definitely see it. Whereas with the bra, given the bodacious implications catching a head-on glimpse carries, the chances I would ever meet it face to face, or even gain the knowledge she has it on, are more in the 0% to 5% range. So while I do love the idea of Donatello on the boobs, the fact that I am far more likely to interact with Donatello on the head forces me to give the TMNT beanie higher marks. A+ to the knit & crochet combo.

Ninja Turtles beanies are convertible, with a movable eye mask sewn onto the hat base. Slide it down over your eyes when you don't want anyone to see you renting The Notebook from Redbox, and back up across your forehead when your eyelids start sweating and developing a polka-dotted rash. Masks come in Donatello Purple, Raphael Red, Michelangelo Orange, and Leonardo Blue. Please specify head size during order, especially if you've got a big ol' melon head like this guy I used to know my freshman year of college whose noggin was so disproportionately large everyone called him Headquarters. Or this other guy whose head was not only large, but also bald and kind of tapered inward as it moved down toward his cheekbones. We called him Bulb. Another dude had man boobs. His name was Tits.

You may not be singin' in the rain wearing a DexShell Waterproof Watch Beanie, but if you're out when the wet drops start to plop, at least your head will stay dry as you run, hike, camp, fish, walk to work, walk the...

If you're in the market for a low-key Super Mario Bros. group costume this Halloween, have I got a Turtle Shell Hat for you...

Being a villain isn't cheap. So, like most actors, rock stars, and former Presidents, villains raise funds for the administration of havoc and execution of attempts to rule the world by selling out. The Villain Chair...

Medieval knight helmets. That's what hip nanas who know what it means to give their grandsons street cred crochet. Now I don't know if Dee Forrest is a grandma, but she's definitely privy to what the cool kids these days...

Although Agent BloodRayne used a similar arm blade to exterminate vampires, this non-digitized replica is made of stainless steel, not silver, so it will be of little assistance in your mission to annihilate Edward Cullen...

Perfect for the aspiring ninja or make believe superhero, these will have you scaling trees in your backyard in no time. Made from pure black stainless steel. Just be careful you don't hurt yourself. Being a ninja is...

I still can't believe they once let snaggletooth Kirsten Dunst play Mary Jane Watson. Sideshow Collectibles' statue would have made a better ultimate girl next door than she did just kneeling there silent and unmoving...

Marc Liss hand makes his Japanese kiridashi pocket knives, or dashis, from recycled files. He says, amongst knife makers, files are considered to be forged from some of the best steel there is, often 1095 or W1. So in...

Some would say the Teenage Mutant Ninja Turtles are making a comeback. LL Cool J would probably say don't call it a comeback, they've been here for years. Teri Hatcher and John Travolta would warn Leonardo, Michelanglo...

The bearded beanie is a perfect way to keep your kid warm and make him look like he has a beard. I have a feeling that it is also a great way to torment your kid, give him an itchy face, and possibly have lasting effects...

Carrying around this secret identity won't create an awkward bulge at your waistline, or require you to wear an underlayer of skin-suctioning red and blue Spandex. Crazy Dog T-Shirts' flipover Ninja tee has the masked...