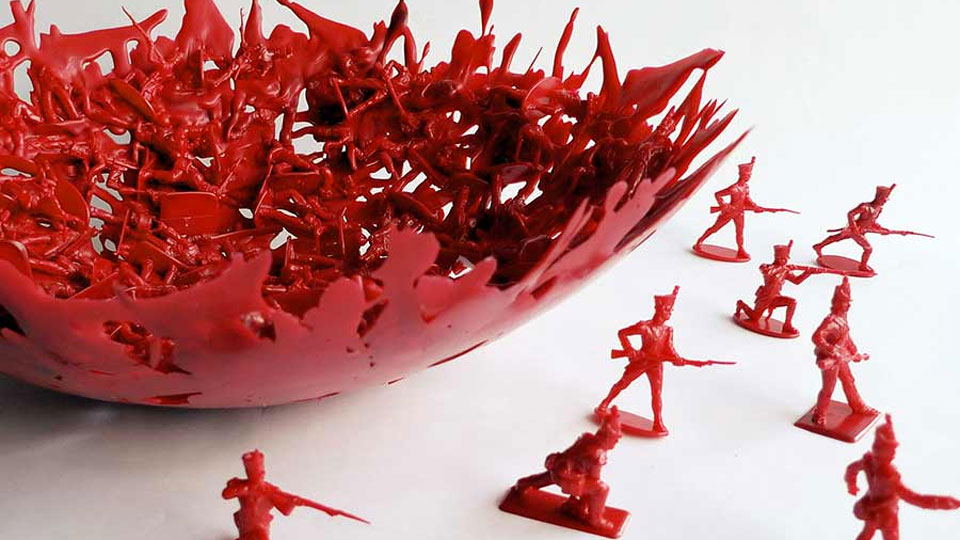 Wow, this War Bowl looks sharp in more ways than one. And the next time you need to stick 'em with the pointy end and Needle is nowhere to be found, a War Bowl to the face seems like it would be a pretty good alternative.

The War Bowl is a Dominic Wilcox design, one the artist hand makes from historically accurate toy soldiers from past English battles. His red bowl tosses British Artillery and French Infantry figures into the Battle of Waterloo, and the black War Bowl depicts the English Civil War with Royalist and Parliamentarian figures.

Wilcox created the War Bowl as an exploration of "war and childhood." Seeing it reminds me of my own childhood, and the time I put one of my GI Joes in the microwave to see what would happen. Unfortunately my mama caught and whooped me less than 10 seconds in, but this War Bowl is inspiring me to try it again now that I'm a grown ass man and can put whatever I want in the microwave.

I mean, as long as my wife isn't home.

Obviously the only one of these celebrities who really sat for his French Republican Guard...or whatever...portrait in the 19th century is Chuck Norris because he's immortal and easily over 200 years old. The rest are...

We can all appreciate the creative skill, labor, and craftsmanship Jim Arnold poured into his elaborate, entirely hand-carved War of 1812 Chess set. But those of you out there who actually know what the War of 1812 is...

Publisher Thames & Hudson's [Unofficial] Manual series covers all the greatest warriors in history, from samurais to to medieval knights, vikings to gladiators. Each of the part-entertainment, part-for-real books has...

I never considered what a G.I. Joe might smell like. I mean a real G.I. Joe. I know exactly what the G.I. Joes I played with as a kid smelled like: plastic and PB&J. And whatever else was on my hands when I touched them...

Sometimes, actions speak louder than worries. Putting together a Kim Jong Un nuclear attack preparedness package doesn't just give us something to do besides sit around and worry about North Korea launching missiles and...

Carlos Schreib created the Espire respirator for professional varnishers and chemical engineers who don't want to work with a heavy filter over their mouth or walk around the office looking like an evil steampunk doktor...

Sorry to all the Veruca Salts out there, but you can't have a Ripsaw M5 Robotic Combat Vehicle or an Oompa Loompa. Willy Wonka and the US Military say no...

You could wait for Black Friday. Orrrr, you could make today Red & Orange with Accents of White & Black Friday, and get the Nerf N-Strike Mega Mastodon a solid 6 weeks early so you'll have time to test it out yourself...make...

As a Platoon Leader in Ft. Carson, CO, Garrett Coker made a bet with a buddy on who would nab the higher Gunnery score. The winner would receive a bottle of Scotch. Coker won. He saw his buddy again a few years later...