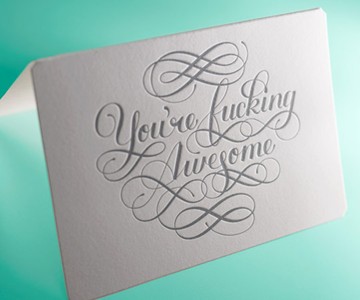 What do you get when you add two parts graphic designer to one part comedian? According to Linus Boman, the answer is Calligraphuck. Boman's brainchild, Calligraphuck Profane Greeting Cards, combines famed flourishes of the hand with juicy flourishes of the mouth for the debut of an unforgettable line of well wishes...and suggestions of where to rot.

Beatific handscript given life by a letterpress relays to beloved recipients heartfelt sentiments, including, "You're Fucking Awesome", "Congratufuckinglations", "Happy Fucking Birthday", and "You Magnificent Fucking Bastard." That's the Calligraphuck Cheeky Collection. For those less revered, Boman also created a Nasty Collection, which delivers messages such as, "Salutations Motherfucker," "Oh my fucking God shut the fuck up," "Fuck that Shit," and the eternally useful "Fuck You."

The Calligraphuck line runs as an Indiegogo project through September 4, 2012. It has well exceeded its initial funding goal of $5,000, but if Boman is able to reach $10,000, he will produce his full collection of 8 designs, as opposed to just 4. (If the $10,000 goal is not reached, backers will be able to vote on the 4 designs they want to see hit first-run production). Support levels of $25 return a choice of either 4 letterpressed Calligraphuck cards, with accompanying bespoke string & button envelopes, or the Sriracha T-shirt, a limited edition creation. Those who pledge $50 will receive both the set of cards and the T-shirt.

Check out additional pledge level options, as well as more of Boman's crude meanderings, on his Indiegogo page.

And continue your exploration of the rude, profane, and titillating with The Big Coloring Book of Vaginas, the People I Want to Punch in the Face Journal, and the Shit I Gotta Fucking Get Done Notebook.

A Book For a C*nt

I like how right underneath the A Book For a C*nt heading in its Etsy listing, there's the denotation that this product is a "Bestseller." Ha! I guess everyone has a c*unt in their life they need to buy A Book For a C*nt...

Cuss Collar - A Collar that Curses When Your Dog Barks

Though the Cuss Collar sounds like a punishment for your foul-mouthed kids - or your husband - its application and function are a lot more literal. The Cuss Collar is a dog collar that swears whenever your dog barks...

When I meet an attractive and well-endowed Portuguese exchange student, I feel that talk is overrated. Body language suits me juuust fine. However, when I'm lost on the streets of Istanbul and the only person willing...

The Snody Crisis Card is punched and jagged for a strong grip and maximal impact when you need to defend yourself. And it's finished in a rich anodized blue with gold edge accents for a slick look and flash of intimidation...

If you're on the hunt to brighten someone's day, these 15 little gifts should present you with plenty of opportunities. Whether it's a spouse stressed from work, a buddy down on dating, a mama about to have a Mother's...

Previously I would have thought it rude for you to have a candy bar and not share it with me. But now that I see Fits & Giggles' rude candy bar wrapper mashups - Twat! Dick! Shithead! Rugmuncher! Ole Fuckface! And the...

Superfight! instructs us to imagine Cards Against Humanity meets Apples to Apples. For the sake of what comes next, I would add to imagine this meeting takes place in either a dark alley, an octagon, or on opposite ends...

I never was much of a Go Fisher. Unlike War, it just had too many rules to keep track of so I always lost. The same will probably happen with Go F*ck, the "adult" version of the kiddie card game, but I get the sense that...

Disturbed Friends - The Worst Game Ever Made

That's What She Said Game

Oh boy, it's everyone's favorite punchline. Turned into a game that makes you want to say it--scream it!--over and over and over again. All. Night. Long...

Hey, look at that. Dick and Titsy are about to pop up out of their...greeting cards? In what is surely the best use of the term since the days of *NSYNC, Dirty Pop has beat off and busted out a set of penis and boobies...

I can think of many people to whom I'd like to send a Go F Yourself card (complete with packaged condom for carrying out the act!) but one dude stands out like a glowing beacon bobbing amidst the sea of the rest. How...