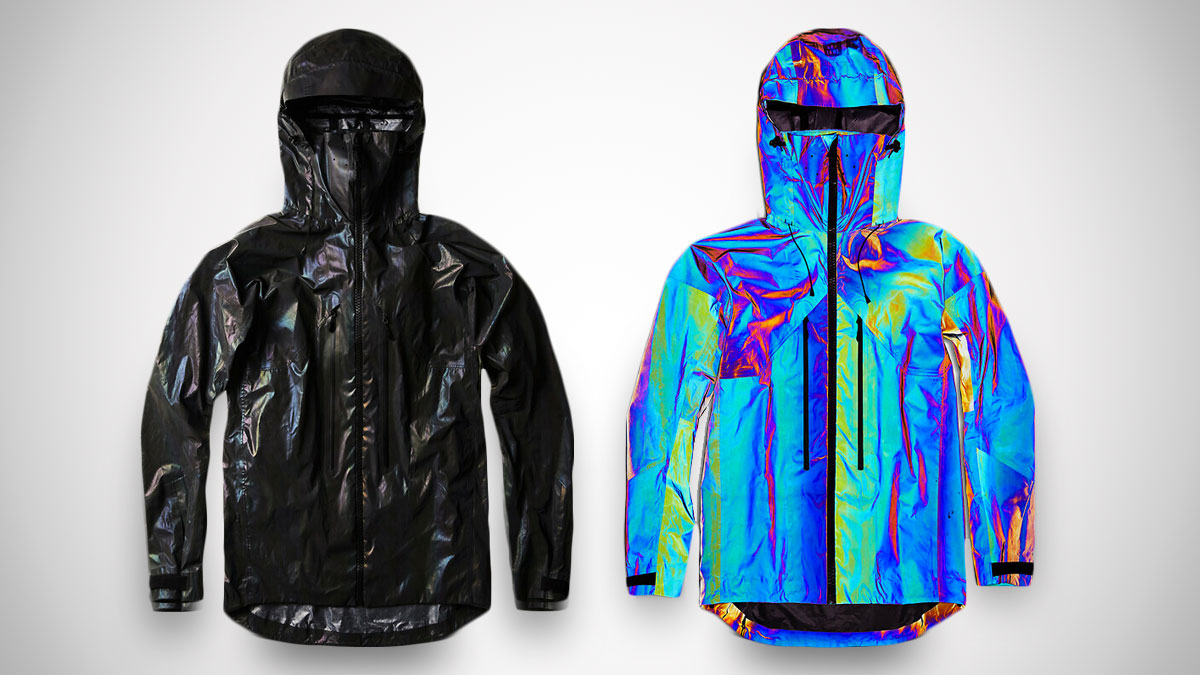 Vollebak's Black Squid Jacket, a color-shifting ski coat modeled after its namesake's adaptive camouflage, follows the futuristic clothing brand's efforts to turn world's thinnest material, graphene, and world's hottest material, the sun, into outdoor wear. With the Black Squid Jacket, Vollebak seeks to harness the biological phenomenon that enables squid to change their color and appearance in an instant in response to their surroundings.

While squid change colors to hide, attack, or communicate, the Black Squid Jacket will do so mostly for the last reason. Using lasers, resin, and 2 billion "disruptively-structured microscopic glass spheres" Vollebak has created a ski / snowboard jacket that looks like - well, they say metal or oil, I say a Glad bag - in low light, and then an iridescent spectacle of color when the brightness of the sun, or a flash / headlight, hits. In other words, the Black Squid Jacket is pretty reflective on the slopes.

The jacket's embedded glass spheres are black, and so invisible to the naked eye until light travels through their curved surfaces. At the back of the spheres incoming light is both reflected back out towards its source and scattered away from it, so the Black Squid itself appears to be emitting the light.

Not just a functional "Look at me!" garment, the Black Squid Jacket is also fully waterproof and windproof. It is uninsulated, intended to be worn as an outer shell over your other layers.

It may not be the skin covering a Yoda head rejected from use in the original Star Wars, but at least Marc Ecko's reversible Chewbacca hoodie is a bodily covering that's a little easier to come by...

Maker Volante Design calls this Assassin's Creed fashion statement the Kenway Jacket, and includes a lot of nonsense about how it is available with two closure options to make it either symmetrical or asymmetrical, but...

Michael Alen calls his Kickstarter project Hero HoodieZ. The first in what Alen hopes will be a series of superhero-inspired hooded zip-ups spotlights crime-fighting vigilante Nightwing. The hoodie, available in both...

You can now have Commander Shepard's N7 leather jacket in 100% Italian lambskin, modeled after the European racing style, and manufactured for BioWare by the same company that makes leather coats for Ferrari. That is...

Normally I would think something called a Sixer Insulated Jacket would insulate me from the cold. But when outdoor apparel brand 686 teamed up with Pabst Blue Ribbon, PBR had something else in mind. This special edition...

Come on, Cousin Larry, don't be re-dikoolous, this is a niiiice jacket. I would wear it to my wedding. And I'd definitely wear it to your wedding. Machete 'N' Sons' Brocade Dinner & Smoking Jackets are part of their Decadence...

Puffin Drink Wear Koozies make your cans and bottles feel extra cozy in their cozys with a double insulated construction, and miniature outerwear and sleeping bag designs. The latter also put the koozies squarely into...

What is a Stove Top Stuffing Dinner Jacket made of? An interior lining of minced chicken, soaked and crisped bread crumbs, and savory caramelized onions. The outside, in a surprise appearance, and an affront to people...

Version 3 of Vollebak's 100 Year Hoodie is like the Anti-Captain Planet of outerwear. It repels wind, rain, snow, and now, fire. Earth is still missing though. Maybe they'll build version 4 to emit a force field against...

Mark Ecko is doing everything he can to make Star Wars a leading name in high fashion. I just wish the items were priced in accordance with the bank accounts of Star Wars fans rather than those of Star Wars actors and...