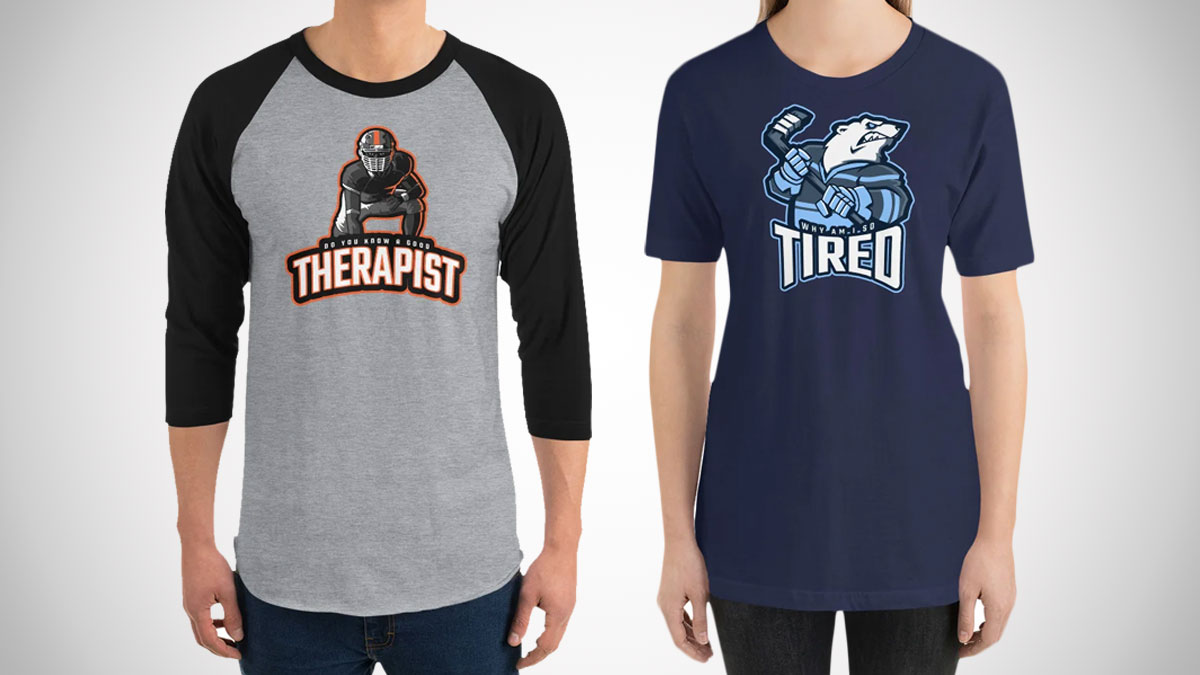 We've seen emo football in the winces and whines of Tom Brady. Emo basketball in the tantrums of LeBron James. Emo soccer in the rolling on the ground, gripping a leg in pain from...pretty much every soccer player out there. Emo hockey - well. You get the picture. But Emo Football parody shirts bring emo sports directly to you, the sports fan.

Or perhaps the sports anti-fan, given the Eeyore-to-Biff-Tannen range of messages and logos the shirts, er, sport.

Comedian Dave Ross has conceived and created the entire line of Emo Football parody shirts, which, at printing, had over a dozen teams in its league. Despite the name, shirts don't feature just football (or soccer if that's what you call it) themed designs and proclamations, but spread their mental health humor across all major sports, professional and college alike.

Ross prints Emo Football sports team logos and sentiments on clothing to order, in your choice of a unisex T-shirt or baseball-style shirt.

Hey, sports fans, are you and your team ready to clean house? Yeah? Yeah?!!! Then start with the dishes. Here, have a #1 Dish Washer foam finger kitchen sponge to rub in the faces of all grease, dried spaghetti sauce...

While the most essential pieces of tailgating gear might be beer and brats, I know no one's going overlook or forget those. Same goes for your favorite football team's jerseys, hats, and onesies, and your recipe for Super...

So I guess there's a few more football clubs of Europe than there are NFL clubs of America, huh? Yeah, I mean, I knew that before, but seeing it visualized in one of Pop Chart Labs' excellent infographic posters is almost...

Camp No Counselors, in a nod to the nostalgia and the worry-free days of childhood, brings all the joys of summer camp to grown-ups. Swimming in the lake. Kayaking down the river. Archery. Singalongs. Bunk beds. Sneaking...

Adapted from the Spaceteam mobile game, Spaceteam the card game encourages all players to engage in a cherished American pastime: shouting...

NFL team pride shines - and free-floats, and spins! - with these NFL Hover Helmets. The 1/2 scale replica pro football collectibles have magnets in their upper and lower bases to create the electromagnetic force needed...

You can tell Fans: How Watching Sports Makes Us Happier, Healthier, and More Understanding was probably written as a gift for Dad, or at least a gift for men, for people, who love sports. But I think Larry Olmsted's case...

On-command feelings. Hapbee is a wearable head or neck band that says it will let you control whether you feel calm, alert, focused, relaxed, or sleepy. Sounds great, huh? And would that it were true. Or rather, would...

How to Stop Feeling So Damn Depressed

How to Stop Feeling So Damn Depressed is for all the dudes out there looking to feel a little less Eeyore, a little more Tigger. In fact, psychologist Jonas Horwitz has written his No BS Guide specifically for men, and...

No F*cks Given: Naughty Words to Live By

Sarah Knight brings all her F*cks together in No F*cks Given: Naughty Words to Live By. The book is a compilation of the "no-bullsh*t, life-changing advice" she offers in her 5 previous F*ck-filled books: The Life-Changing...