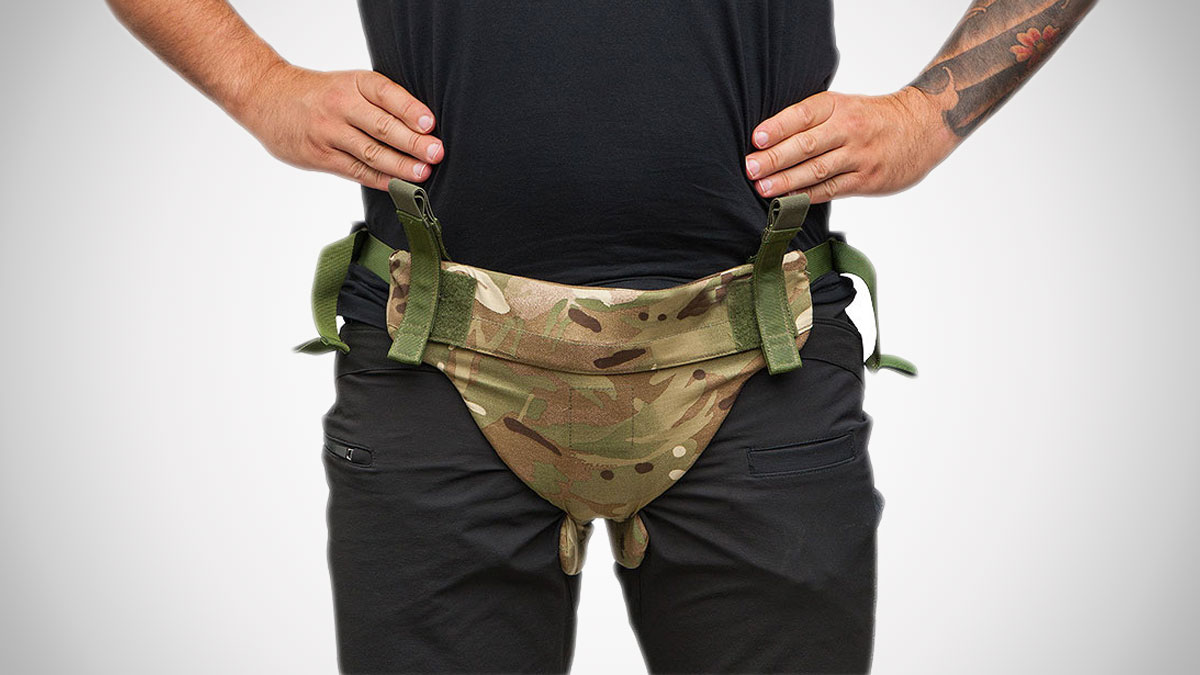 So what exactly does the Like New qualifier on these bulletproof men's underwear mean? The exact words in Sportsman's Guide's listing are British Military Surplus Blast Shorts With Kevlar, Like New. Are they saying, "Yeah, some dude wore this hyper-reinforced diaper in the field and sweated his nut sack all over it, but the private never took a bullet to his privates during his tenure, so they're just like new!"

Elaboration on this point is not included in the crotch guard's brief, so there's no telling for sure. But if I'm right, I do hope they were able to blast the Blast Shorts with some British-Military-strength cleaner, plus a few shots of Febreze, before releasing them for surplus sale.

What I can tell you about the Blast Shorts are that they are a genuine British military issue, and do secure over your precious C&B diaper-style, with an adjustable waist belt and plastic buckles. Kevlar inserts provide the ballistic protection that any dude wearing bulletproof underwear for a legit reason will surely hope he never gets asked to give a performance report on.

100 hours to build this beast. Totally worth it. Their words, not mine. Not that I'm calling BS or anything. It's just that I'll never know if Starwood Motors' Full Metal Jacket Jeep is totally worth it or not because...

At $3.2 million, Swiss fashion house SuitArt's Diamond Armor has nabbed the title of Most Expensive Suit in the World. The current title. I will obliterate it next month when I debut my Diamond & Adamantium Armor for...

I sure hope I never need to use a ShelterCube Extreme, but after what I "anonymously" mailed my tight-ass boss, I feel like maybe a storm's a-comin'...

A collection of bulletproof clothing shouldn't just protect you from harm, it should protect you from looking like a fashion disaster. Why should body armor stop at bland and functional if we have the creativity to make...

Even in the virtual world, when it rains it pours. Not only is the ARAIG (As Real As It Gets) multi-sensory feedback suit the latest in a recent lineup of virtual gaming enhancement gear, but it has also joined VR immersive...

The Karlmann King is the ride Batman will get once he settles down, has kids, and needs a more practical car, a roomy SUV, to cart them all to soccer practice and trombone lessons in. The Dark Knight will also buy it...

Protect your family. Protect your friends. Protect your whiskey. The Whisky Vault (we'll agree to disagree on whether or not the word is better with an "e") is for the most serious of whisk(e)y collectors. Those who feel...

No surprise the forthcoming Graphene Jacket "experimental prototypes" will be birthed from the utili-couture loins of Vollebak. They're the same company responsible for the Baker Miller Naptime Hoodie, and known for their...