The Tempus "Who's Buyin'?" Spin Coin 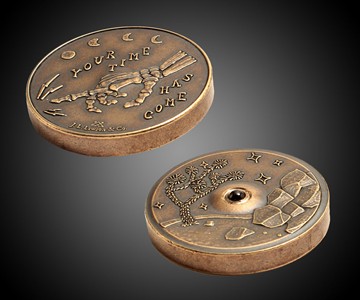 Coin flipping is so Ancient Rome*. The Tempus offers a fresh spin on recruiting the fates to help us make decisions and settle arguments today. A spin that's more contemporary, more in line with our current obsession with fidget toys, and, crucially, more accommodating to those of us whose hand-eye coordination is inversely proportional to the number of drinks we've had. Because J.L. Lawson & Co. created the Tempus Spin Coin to determine the answer to one very important question: Who's buyin' the next round?

Or, better, who's picking up the whole tab?

Tempus Spin Coins are minted with a scene from Joshua Tree National Park (J.L. Lawson & Co.'s company origins) on their spinning side and the pointing hand of a skeleton designating, "Your time has come" on their deciding side. A partially embedded 3/32" ceramic ball conducts the spinning. Tempus production will include bronze, copper, and .999 silver editions, each measuring 1-1/4" in diameter and 1/4" thick.

While rooted in boozin' good times, you can of course spin a Tempus to determine the best solution to any conundrum about who has to, or who gets to. Who has to do the dishes? Who gets the last slice of pizza? Who has to tell the guy at work he needs to start wearing deodorant? Who gets first dibs on the hot blonde who just walked into the bar?

Tempus designer Anthony Lawson notes that the coin's artwork and nature aren't intended to create a "perfect spin." But fidgeters and spinner enthusiasts out there should feel it's still fairly balanced in action. Lawson's average spin times are 7 to 9 minutes.

The Tempus Spin Coin runs as a Kickstarter campaign through March 9, 2017. Pledge for your choice of bronze, copper, or silver decision maker here.

*Really, it's that old, kicking off in yesteryear Rome as a game called navia aut caput, or "ship or head," representing the ship that was on one side of Roman coins and the head of the emperor on the other.

Don't be fooled into thinking the Toroflux kinetic sculpture is just some stupid bracelet-slinky-figuratively-one-dimensional-girl-and-baby toy like I was. Watch the video. Like, beyond the first 10 seconds when the dude...

The geometric Gomboc's shape supposedly mimics that of a radiated tortoise shell, and its movement that of the animal's when it rights itself without the use of its limbs. Now if that's the case, my question is: why would...

Nothing says it better than this Penny Clock from Fun Cool Wall Clocks: time is money...

Moondrop. Because this fidget toy's calibrated design of metal and magnets makes it feel like you're dropping the aluminum slider down its shaft from the moon, at a precise gravity of 1.6 m/s squared. Or, you could choose...

The Vortex Dome is a science-packed desk toy that does for you eyes what fidget toys do for your hands. With a stainless steel and ball bearing spinning base, the Vortex Dome gets a little tactile stimulation in there...

When I think of Coonan, I think first of .357 Magnums. But a close and immediate second is zombie and vampire slaying. And now I'm wondering if the firearms manufacturer and I have a psychic connection. I'm wondering...

If, like Selena Gomez, you can't keep your hands to yourself, check out Yomaxer's version of metaphorical gin and juice, the Tri-Spinner Fidget Toy. Hands idle can kill time, and hands anxious may find some relief from...

A Golden Snitch fidget spinner for all the antsy, anxious, stressed, and spectral Harry Potter fans out there. Add a pair of wings to a copper hub, and you've got your very own Quidditch game for one. Well, more like...

Well, you probably give a little more than zero Fs if you're going to the trouble of flipping a coin to make the decision. But if your wife asks you whether you'd prefer new cloth napkins in sage green or seafoam green...

Know, and probably love, Zero Hour's new Rebel Microlight Fidget Spinner in 30 seconds or less with one click. This one. The short demo video gives you the full tour of the visual splendor that comes with merging a pair...