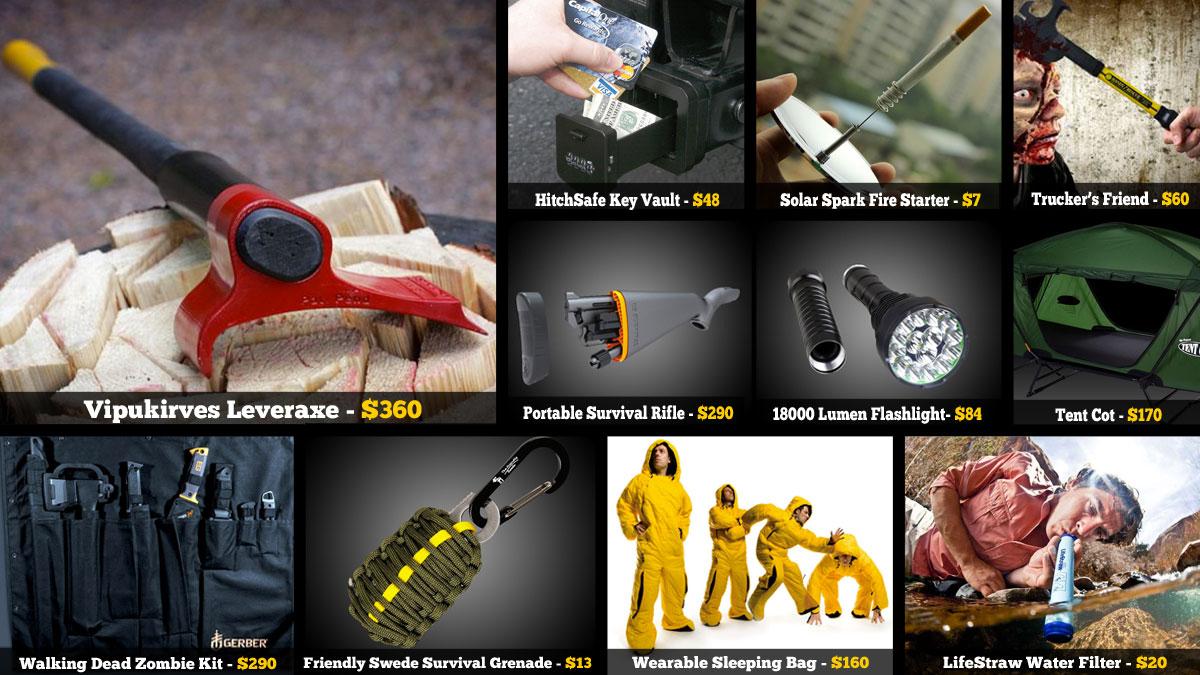 Just you, the squirrels, the trees, and a 42" Chinese dadao flat ground to an edge that could take them all out in one fell swoop! That's the Great Outdoors I'm talkin' about!

And the outdoor gear, tools, sporting goods, and survival supplies that might make better gifts for the less cowabunga! people in your life are cool too. The following are a few of our recommendations for these gifts of the outdoor persuasion. (Note: All items' prices are listed as they were at printing. Prices are subject to change.)

Selk'bag Wearable Sleeping Bags ($160). Sweet, a onesie for temperatures even colder than my parents keep their house. Selk'bag's wearable sleeping bags cater to all outdoor enthusiasts looking to stay warm without the constriction of a traditional rectangular or mummy bag, and especially those with Raynaud's Disease or claustrophobia, such as every girl I've ever met. Rated to 35 degrees F, the Selk'bag Classic suits those sleeping in tents, uncovered beneath the stars, even in the back of the pickup on nights you know better than to drive home.

Kamp-Rite Oversize Tent Cot ($170). A lightweight, portable companion to your ventures into the wild. Or the back yard. Kamp-Rite's oversize tent cot has the best of all dimensions covered. Its legs are suspended 11" off the ground to separate human bodies from moisture, snakes and rodents, and its surface area's x- and y-axes provide 32" of elbow room, plus a full 90" of space head-to-toe.

Kelty PK 50 Zipperless Backpack ($200). Has both a roll-top opening and roll-closure sleeping bag compartment, making it a completely zipper- and hassle-free carrier. Its 50-liter total capacity can be broken into 35L and 15L segments, with a detachable (15L) front pocket that unclips from the main pack for day hikes or bringing essentials like underwear and weed into the TN2 with you. PK 50 backpacks also include an integrated rain cover for protection from...rain. And spitting camels.

Dakine BC Utility Vest ($125). A giant backpack pocket is fully integrated into the vest so there's no clunky load shifting and knocking about during hikes, ski trips, and other outdoor adventures. Dakine further streamlines gear-heavy activities with a bevy of pockets on the vest's front side and interior that enable man as pack mule to pack in items such as a radio, snow tools, snacks, and water a little tighter.

Rhino Unbreakable Shoelaces ($20). Boots are only as strong as the ties that bind them, so these laces have been designed to resist flames, knives, saws, bear claws, and zombie maws.

BioLite CampStove and Device Charger ($130). No gas, no juice, no problem. BioLite's petrochemical-free CampStove and USB device charger burns hot with full battery power during all seasons of backpacking, camping, and chillin' hermit-like in the woods. Using only the leaves and twigs collected along the trail, the CampStove harnesses and corrals enough energy both to boil a pot of water in about 4 minutes, and recharge a smartphone, iPod, LED flashlight, or GPS.

Runnur Hands Free Carry-All ($45). It's like Chewbacca's bandolier meets Alan's satchel..but neither as rad as the former nor as wholly emasculating as the latter. Runnur's shoulder-slung essentials tote somehow neutralizes the opposing adjectives associated with Wookiees and man purses, emerging instead as a basic, low-profile, and probably pretty handy way to lug around your crap during summer festivals, hikes, bike rides, and pub crawls.

HitchSafe Key Vault ($48). Because there's no better place to stash your singles in the event of spontaneous strip shows. Also, it can safely guard spare house and car keys, as well as mind small valuables during camping trips, snow excursions, and other I-don't-feel-like-carrying-that pursuits.

Bike-Mounted Leather Beer Caddy ($60). Ahhh, full grain leather, a 6-pack of fine brew, and...physical activity? Blech. Can we swap that last one out for a cigar? No? That would defeat the entire purpose of Fyxation's bike-mounted beer caddy? Well. Alright. I guess this one is for all of you athletic overachievers out there.

Vipukirves Leveraxe ($359). A Finnish design improvement on an ancient woodcutting and zombie slaying tool. As the name suggests, Vipukirves' Leveraxe modification of the traditional axe head seeks to incorporate more stability and leverage into the woodchopping process.

Zombie Apocalypse Survival Kit ($290). Do you want to buy a 7-piece set of gut-ripping knives and sick machetes? Just like zombie slayers Rick Grimes and Co. use on The Walking Dead? You're right, it's too expensive. ... Do you want your mama to buy you a 7-piece set....

Zippo 4-in-1 Woodsman Tool ($359). If the Vipukirves is too spendy for you--or you refuse to believe it actually works--return to tradition, with just a hint of 21st century, and go for a Zippo. The company's 4-in-1 Woodsman easily coverts from axe to saw, and mallet to stake puller.

Gonex 18000 Lumen Flashlight ($84). This flashlight isn't abusing superlatives when it calls itself "Super Bright". The torch is also waterproof, weighs just over 2 pounds, and has 5 lighting modes so it should make a valuable companion on hikes and camping trips, hunting and fishing expeditions, and during home repair attempts and emergency situations.

Solar Spark Lighter & Fire Starter ($7). A pocket-sized parabolic mirror able to catch and focus the sun's radiant energy right into the heart of its metal coils. Light your campfires, cigarettes, cigars, incense cones, and in the great states of Colorado and Washington, big fat fatty joints.

Portable Survival Rifle ($290 - $350). "Don't leave civilization without one." It's the motto of the US Survival AR-7, a semi-automatic portable rifle that weighs a mere 3-1/2 pounds and measures in at 16-1/2" long when broken down and stowed in its waterproof stock.

Zayak Sea Sled ($375). Explore the wonders of the ocean without granting the wonders of the ocean free access to your mouth, eyes, ear canals, and nasal passageways. The Zayak Sea Sled facilitates floating face-down, comfortably, breathing normally, and without the leaky, foggy mask and accidental salt water inhalations characteristic of a snorkel.

Cogburn CB4 Hunting Bike ($2,200). A two-wheeled, man-powered hunting machine. The camo bike has fat, 3.8" tires designed for stealth backcountry pursuits. Its scabbard, made of light, aircraft-grade aluminum, attaches to the bike's rear rack and positions to hold rifles and rods in addition to bows. The CB4 also has full-range gearing, all-condition disc brakes, and a wide handlebar for control while loaded.

Kuat Bottle Lock ($22). A 5' cable of 8mm thick braided steel all neatly wrapped up inside what otherwise looks like a cyclist's water bottle.

LifeStraw Personal Water Filter ($20). A Time Magazine Invention of the Year Winner that removes a minimum of 99.9999% of waterborne bacteria.

Survival Seed Vault ($30). This vault is stuffed solid with packets of fruit and vegetable fetuses primed to grow big and strong and nutritious enough to feed your whole family in an emergency. Or when the kids forget to pick up the pizza even though that was part of the deal when you let them use the car, and so as punishment everyone has to eat salad and butternut squash puree for dinner.

Adventure Medical Kits Trauma Pack with QuikClot ($20). A dose of QuikClot, a dressing used to help stop life-threatening bleeding, joins an array of bandages and other covers for treating scrapes, abrasions, gouges, and the loss of at least 3 layers of skin to the ruthless surface of Cherokee Lane while skateboarding last week. Why doesn't anyone ever believe me when I say my center of gravity is too high to learn new athletic skills as an adult?

Friendly Swede Eye Knife Grenade ($13). It's the Friendly Swede! With sharp eye knife! The Friendly Swede has added a 2" stainless steel eye knife to its survival grenades. The small, yet practical kits each consist of a carabiner clipped to a knife's jutting eye, whose blade is then cocooned inside an intricately wrapped paracord.

RattlerStrap Flint Laces ($14). Flint Laces step in when the matches are wet, the lighter stops working, and the fire steel is...damn. Still sitting in the third drawer of the storage unit in the garage. Their rubber-capped tips peel away to reveal a ferro rod just large enough to generate a fire-starting spark when struck with a steel edge.

LuminAID Solar Powered Inflatable Light ($20).The LuminAID housing folds and packs completely flat for easy storage and portability. When inflated to small, lightweight pillow form, its solar-driven LEDs burn bright for 6 to 10 hours, illuminating anything from the interior of a tent to the deck of a sailboat to entire post-disaster communities, such as those hit by Haiti's 2010 earthquake, where the LuminAID debuted.

Still not sated? Check out Dude's full archive of the outdoors here.

Don the Alien Sleeping Bag, and watch the tables turn on Bigfoot, Sasquatch, grizzly bears, and all the other beasts of the forest who will now tell campfire stories about and live in fear of you...

Mother Nature, we're movin' in! And thanks to the Roadie Tent & RV Camping Organizer, we've got a compact, easily-transported shelving unit to store enough shoes, clothes, and gear for the whole fam damily! It will be...

Stealth. Stamina. Sniper sight. And that's just the M4 Tactical Crossbow itself. Like, before taking into account the litany of powerful, valiant, not-to-be-F'd-with characteristics Cornelius and I will bring to the table...

If my family were to bug out, probably the first thing we'd do is tear apart this bag of supplies in search of the Xanax and Scotch it does not contain to help calm ourselves down. Luckily, in the event that one of us...

Taking top honors in the category of Yo That's Crazy and Moderately Disturbing but I Guess It Was Gonna Happen Sometime: TrackingPoint's PGF. Precision. Guided. Firearm. It's fighter-jet-style, lock-and-launch technology...

And a watermelon takes it in the gut again. Like so many other weapons demos we've seen around here (Gotcha Cap, Throwing Card Knives), the effects of the Wasp air injection knife have been exacted upon a watermelon...

I wish it didn't look like the wasp nest I fell on as a result of being clumsy when I was kid, but other than that the Tree Tent seems pretty cool. An environmentally-friendly suspended abode that can comfortably accommodate...

Rattlin' Randy Riffenburgh owns the dual titles of Falcon Slingbow Creator and Falcon Slingbow Sniper. He developed the patent-pending, arrow-shooting slingshot for hunting, fishing, and target shooting. And he reigns...

If you're a big game hunter living in Arizona*, you are Crosman Golden. It's the only state in the US where there's a season for pursuing just about every species of big game on the Crosman docket with the company's forthcoming...