Alligator in a Manhole Doormat 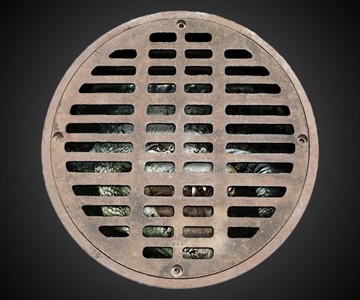 Though not as blood-curdling as a breaching shark in an elevator, an alligator snarling up through a manhole cover on my front doorstep should make uninvited visitors take pause long enough to second guess their decision to disrupt my Air Supply rock-out session and game of One-Man Twister.

OK, I know you're going to think I'm making this up because I make shit up all the time, but I swear this is a true story. I swear on the condition that if it's not true, I'll sell all of my gaming consoles and Air Jordans on Craig's List and devote my life to helping others with no expectation of payment or personal gain. Believe it. And believe this:

When my dad was little, maybe 3 or 4, you could keep alligators as pets, so his dad sent him a baby alligator from Florida for his birthday. I don't know how long he had it before the incident, but I do know that since kids thrive on touching things whether they are supposed to or not, one day he picked the gator up out of its aquarium, held it in front of him, and stared into its eyes. Yeah, you know what happened. It bit him in the face. But not just bit him, bit him and latched on. Snout along top lip, jaw underneath chin, game over. When an alligator's maxillofacial muscles contract, the hands of man have no hope of releasing them. His mom had to drive him to the hospital...or maybe the vet...with the thing hanging from his mouth so they could knock it out and pry it off. Probably they let it loose in the Chicago sewer system after that, but my dad never ran into it again, say, nostalgically peeping up at him through a manhole cover like how the guy who raised the Clydesdale horse reunited with it years later during a Budweiser parade. He does carry the gator's memory in the form of two small scars on his lip and chin though.

"Just text us when you're here. No need to knock and get the dogs involved." Whether you're a pet owner or not, this doormat sends a relatable message. And since anyone who comes over is certainly on their phone right...

Will the Mud Scrubber Rubber Brush Mat finally get my mama off my back about my feet? My feet that are only wet and muddy and covered with ice melt because I was out shoveling her sidewalk?...

True Mirror - How Others See You

The True Mirror idea is simple (and old; it was first patented in 1887): place two mirrors at right angles and have a look-see. Its effect, though, elicits the complexities of realization spanning everything from Whoa!...

HOLHO. It's like a portmanteau of Holla! and Jai Ho! And the contraption is an Italian design, so we've got some real cultural diversity going on here in the world of holograms. A pyramid-shaped structure that sits on...

I've found some choice anatomical optical illusions for your viewing pleasure this evening (or morning with your computer rearview mirror on your monitor at work). Most are just momentary illusions whose true nature is...

The Sierra. Part coffee table, part girl's best friend, part the wedding band you melted down for shits & grins after your divorce. Made by Italian designer MAVIMATT, the Sierra Coffee Table is a handmade piece of opulence...

I love the dude who makes Grand Illusions' videos. I think his name is either George or Hendrik. Both because George Auckland and Hendrik Ball are the two Brits who founded and run Grand Illusions out of an 18th century...

I don't know how a real working Invisibility Shield really works, and I don't care. As long as it hides me from solicitors when I lounge in my mama's front yard, my friend Cornelius when I use it to scare the ever-loving...

The German-made Shtox glass, a Red Dot Design Award winner with a bottom primed for rotational movement, has the patented capability of spinning into infinity at the flick of a wrist. Just like Euler's Disk. Also like...

Whalecum, my friends. We have nothing but whalecum for you in this house. Spermy the Whale gives a gushing "Hello!" to all guests who cross the threshold in this delightful Whalecum Mat...

I'd call the Don't Stop. Be Leaving. Doormat the ultimate Dad joke, but Dad would never be so rude to a visitor. And Dad would never wish a visitor to go away, even salespeople, and Mormons who want to teach him about...