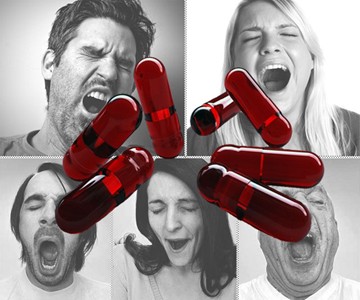 Kinsey Institute mad scientists, I don't know what kinds of problems you're encountering that might be inhibiting this miracle solution's public debut, but if a proper moniker is the lone holdup, I'm sure an open call for titling would return some outstanding results. Obviously my suggestion is the Boregasm Pill. I think Boregasm is a good name both because people tend to yawn when they're tired or bored, and because if yawning could make them have an orgasm they would probably be way less tired and bored. (Oh, I'll get to the post-coital fatigue factor in a minute.) Think of all those quarterly meetings and school lectures and dates with girls you have pretended to find interesting only to have them be like, cheek peck, "Thanks for the $150 dinner. Peace out." Insufferable. Now imagine yourself in those same situations, but with a play-out as follows:

There you are. Some dude/chick is droning on. You're trying hard, really hard, to pay attention. But you're dying of boredom. Your eyes droop. You bow your head. Try to stifle the inevitable jaw drop a little longer. But you can't...hold it...in. You...

Holy Kleenex, Batman! I think I just blew a load!

And suddenly, you're back. Back to Excel spreadsheets detailing quarterly performance. Back to differentiating equations. Back to emitting sounds of sympathy and disgust at the appropriate times as you get the play-by-play of how Nikki wasn't invited to Jenny's party but she found out Kelly was so she tried to private Facebook message Kelly to ask what the WTF but she accidentally posted it on Kelly's timeline and all of Kelly's 876 friends saw the message, including Jenny, and now Jenny is pissed at Nikki and Kelly because she thinks they're, like, trying to cause drama and ruin her party so now she's uninvited Kelly and so Nikki and Kelly are, like, joining forces and trying to get people to blackball the party and--is that the right, word, blackball?--and also unfriend Jenny on Facebook and if they're successful it would basically mean the downfall of Kelly. Like, from the Earth of her social life.

DISCLAIMER: Boregasm pills deliver only one orgasm per dose, and have a recommended dosage of one pill per 12 hours, so you may still need to exercise some caution when choosing which conferences to attend and girls to go out with.

The miraculous science behind the Boregasm pill involves the tweaking and rearranging of an orgasm's biochemistry. For example:

As a bonus, Boregasm pills incorporate 100 mg of caffeine to enhance blood flow during the Big O and alertness pursuant to it.

The Boregasm outcome? Renewed vigor, renewed interest in the mind-numbingly monotonous parts of your day, renewed commitment to swimming strong through the murky waters of life, and, most notably perhaps, a renewed appreciation for the yawn.

Note: I think the pills work for ladies too but I didn't read on to find out how because, like all men, I'm not too concerned about whether or not women have orgasms.

In a bad situation, I think I'd say the same thing about seeing Assless Yoga Pants as I would about seeing Superman: Here they come to save the daaaaay!...

Remember that one time you let some chick drag you to hot yoga because she too was hot and you wanted to see her do bendy things in spandex pants, but then you ended up spending the whole class lying on your back trying...

It may still stink, but ingest a couple of these 24K capsules, and your shit will look as handsome as a pile of gold. Tobias Wong and J.A.R.K. (Ju$t Another Rich Kid) created the Gold Pills as part of their INDULGENCE...

A heads up to politicians and city planners: stop wasting your money on bike lanes, tax incentives, and PSA campaigns. All you need do to persuade your constituents to trade in cars for bicycles on their morning commute...