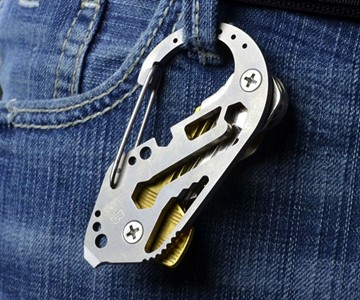 The KeyBiner calls itself a more refined version of the carabiner, but you might recognize it as a more souped up version of the KeySmart. Both remove some of the bulk and all of the jangle of schlepping around a fat wad of keys, but the KeyBiner upgrades this lone feature with the addition of several multi-tool capabilities.

Of course the KeyBiner retains its traditional carabiner look and press-and-clip foundation. Latch the tool to a belt loop, a bag strap, your 1-3/8" ear gauge...you know the drill. From there enjoy easy access to up to 14 neatly organized and silent keys, plus the following:

KeyBiners are available in your choice of aluminum, copper, or titanium. Each comes with screws and hardware for custom fitting the key retention system to hold the number of keys desired--3/8" screws hold 1 to 6 keys; 1/2" screws hold up to 10; and 3/4" screws fit up to 14.

Muchas danke to Gearward for the Dude Product Tip.

The Killer Key is for law enforcement officials, landlords with squatters or evicted tenants, and pranksters who thrive on taking things one step too far. See, the key blade inserts into any Kwikset or Schlage brand lock...

The Tiny Inconspicuous Handcuff Key is intended for use by trained law enforcement, military, and security professionals only. However, TIHK will sell a pair of them to anyone with a credit card and $13. Because that...

Shomer-Tec's Titanium Escape Ring won't just serve as a symbol of your love for and commitment to your wife, it will also get you out of the handcuffs that chick from the hotel bar leaves you in after she Roofies you...

The Keyport Slide 2.0 masters the art of consolidation. Consolidation. I like that word. It conjures images of culling junk, making things tidier, increasing manageability and pleasantness. Even when I'm told that we...

It's dangerous to leave the house without a key! Take this set that will also serve as your sword and shield if the gangs...of ants...attack. The Key Armory stocks up fantasy and gaming fans' keychains with iconic swords...

Copying your keyfobs and keycards? It's now Keysy peasy. The Keysy RFID duplicator from Tiny Labs is able to copy up to 4 low frequency (125kHz) RFID fobs and cards onto its single keychain attachment to consolidate your...

Triple Aught Design's Skeleton Key is a crafty piece of EDC with a versatile anatomical structure and bones US-made of solid 6AL-4V titanium billet. Not just a multi-tool but, in its attractive and svelte package, a mini-tool...

The HitchSafe Key Vault: Because there's no better place to stash your singles in the event of spontaneous strip shows on the Platinum Stage Hitch Pole. Also, it can safely guard spare house and car keys, as well as mind...

It's about time I had a Sword House Key, given the number of sword fights with locks I've had in my life. In fact, just two weeks ago I was testing out the lock and key on my new nightstand - yep the top drawer came with...