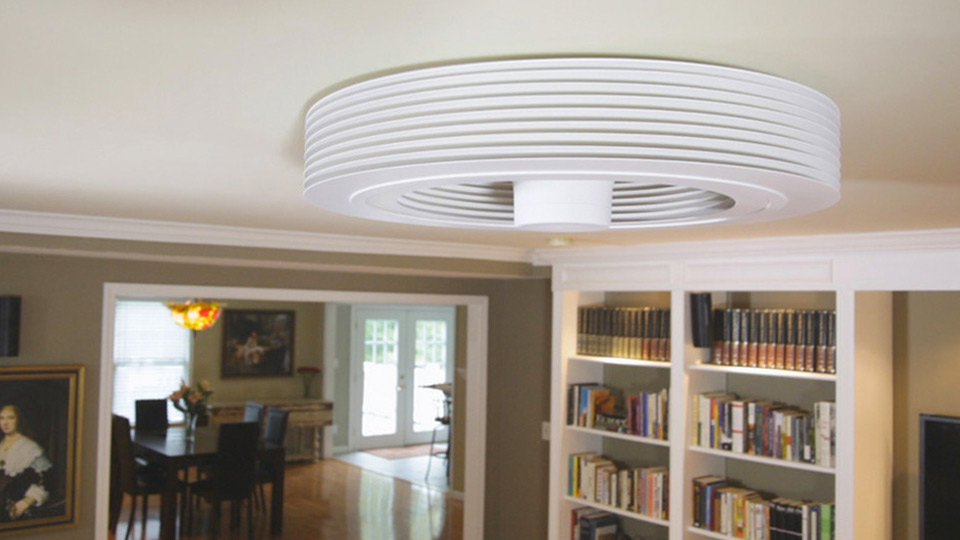 Not that Dyson hasn't proven that fans don't need to look like a duck and walk like a duck to be a duck, but the Exhale bladeless fan is still the strangest looking thing I've ever seen mounted to a ceiling. I don't even know what to compare its chunky, slatted self to. Maybe a cross between one of those accordion-style air pumps and a spinning merry-go-round. Or like something Bill and Ted would have seen when they visited Rufus in the Utopian future. But I guess Exhale can't take the form of a traditional ceiling fan when its function also deviates to the extent it does.

Instead of aligning blades and blowing air all catawampus around the room, the Exhale bladeless ceiling fan "utilizes the science of laminar flow" to produce a cyclonic, or 360-degree distribution of air. This means the fan's output is uninterrupted (i.e., by its own blades), resulting in much quieter operation and more comprehensive air movement, horizontally around an entire room instead of just straight down. Additionally, Exhale air passes over people/objects from the side, like a calm breeze rather than, uh, a fan blowing in your face.

Exhale's cyclonic airflow also multiplies as it runs, creating a kind of vortex that constantly stirs and co-mingles all of the air in a room. This serves to eliminate hot and cold spots, stabilizes temperatures, and reduces stress on air conditioning or heating systems.

Though it looks huge in the photos, Exhale's actual diameter is 34", which is smaller than most large ceiling fans currently sold. It weighs around 25 pounds and can cover rooms measuring up to 20' x 20'. The fan is manufactured in 8 different colors.

Granted, when it's hotter than a dragon's undercarriage out and I'm tasked with sleeping through the night, I don't really care if the air-circulating device that makes that possible looks like Jabba the Hutt's butt crack...

Make that "Geizeer Super Cheap and Eco-Friendly Ice Cube Air Conditioner." (And it's actually pronounced "Guy-zer," not "Gee-zer," even though in my head it will always be the latter.) At an operational cost of less than...

I like the modern look of the Kichler Kyte Ceiling Fan. Very cool indeed. Wonder how many fingers it would shear off if I touched its giant spinning pan in motion. And I'm thinking total knockout + concussion if it hit...

I'm not gonna be a wet blanket and diss these Light Bulb & Fan Pull Chains for ceiling fans because it's really not that hard to look up and figure out which cord controls the light and which cord the fan. Nope. No wet...

I was going to open my discussion of the Airlight screw-in ceiling fan/light with a lightbulb joke, but in searching for the perfect one to relay I stumbled upon something even better: an entire Website devoted to lightbulb...

I was gonna say, "Add the Valiryo Body Dryer to the list of weird products I don't need," but then I remembered how I felt about bidets before I tried one, and how I feel about the glorious toilet masters and pinnacles...

How many reasons do you have not to get out of bed in the morning? Balluga will add at least half a dozen more. This interactive bed claims it is the World's Smartest, and after reading a bit about it, I'll at least grant...

I never knew--never truly knew--what it was like to be hot--perpetually hot, like, hotter than a nun in a cucumber field all the time--until I moved in with a girl who is interminably cold. It was 94 degrees outside my...