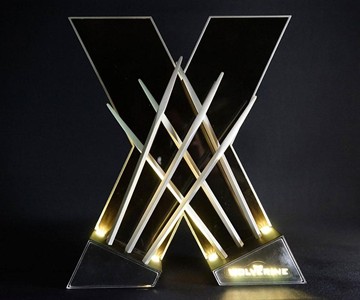 An "X" lighting base finished in black and silver and fitted with a full, removable, and--ohhh yeahhh--wearable set of metallic claws. The Wolverine Collectible Light from Taiwan product design group HingSan is selling now, shipping soon, and fixing to be the juicy red Marvel cherry on top of the ManLoft I'm making in my girlfriend, She-Ra: Princess of Power's, condo. Ohhh yeahhh, Wolverine claws made into a lamp, and I'm moving out of my mama's house.

While a holdup in customs prevented HingSan from adding the adamantium accents they had intended, the Wolverine Collectible Light still looks sufficiently badass with its subtle "X" backdrop and 4 sets of projection lights illuminating upward towards the claw tips. Adding further depth: a Wolverine logo lit in orange.

The light itself operates via a touch-controlled on/off switch and shines warm-color LEDs in your choice of 3 lighting modes. Wolverine claws, if you didn't catch it before, are life-size and ready to slip off the lamp and over human hands when it's time to unleash the beast, or hit up the next cosplay pub quiz.

Want the claws without the light? Try these.

The Vast Land Incense Burner Lamp is supposed to be a great companion for yoga or meditation, but looking at it kinda brings me the opposite of relaxation and peace. That lone figure walking along a barren terrain of...

I really appreciate how un-stuffy and...cheeky the Brits' sense of humor is. Sorry, humour. For example, I'd like to give whomever created this lamp a big slap on the back to show my admiration. And then a big approving...

This is a Spine Lamp. A spine lamp that doesn't forget the pelvis! And you shouldn't either, all ye back archers, tail tuckers, and hip droppers out there. See, you have to think of your pelvis as holding a bucket of...

I grew up with fireflies. And by that I mean I grew up squashing them and rubbing their bioluminescence on my arms and legs so I too could glow like a superhero or anomaly of evolution. I never saw any blue ones though...

The HydraLamp Anti-Gravity Fountain Lamp is cool on its own and all, but what really makes this neat display piece a candidate for your living room are the cat and Corgi. Check out the videos. These two are as baffled...

Everyone wants to be a hard ass. The Terminator. The Regulator. The Undertaker. Chuck Norris. Where's The Do-Gooder? The Helper? The Revitalizer? Relegated to the arenas of kindergarten classrooms and home decor, that's...

Now here's a lamp that really bridges the gap between art and functional lighting. Mark Mitchell's Bridge Lamp will obviously look outstanding running across your desktop or work table. But the designer says it will also...

I'm getting this lamp and putting it on my desk with a Krispy Kreme donut or a piece of gooey butter cake in the spotlight's dead center. It will be the first time ever some a-hole doesn't steal my food at work. Because...

Natural sunlight is overrated, but slatted blinds and electroluminescent lighting are even more badass than their hype. Cash in on coolness, and brighten up your basement apartment or 10 x 15 cubicle with this simulated...