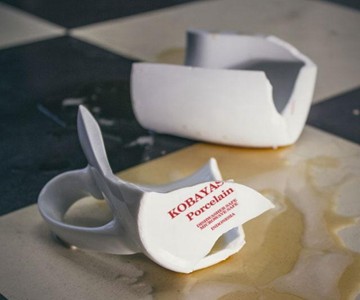 The greatest trick the devil ever pulled was convincing the world he didn't exist. And like that...he's gone.

The Usual Suspects is probably my favorite movie of our generation. So obviously that means The Usual Suspects is one of the greatest movies of our generation. And even if you dispute that claim, it's hard to argue that Kevin Spacey isn't one of contemporary Hollywood's best and most badass actors. (Do it, and I'll flip ya, I'll flip ya fer real.) Own a piece of Spacey's brilliance as Verbal "the Gimp" Kint, plus the overall brilliance of the caper flick itself, with this Kobayashi mug.

Simple in appearance, dense in meaning, the Kobayashi mug symbolizes the intricate tale Verbal wove for Agent Kujan in his retelling of what happened the night a ship went up in flames in San Pedro Bay. Despite the photographic nod to its role in the film, this Kobayashi arrives intact and ready to hold your cup of joe. At least until you're hit with the crushing realization of your own big reveal.

Kid's been funneling college tuition money into the next Heisenberg-grade meth lab.

Wife's "book club" is a cover for her affair with Bob Sagat.

Mama has been secretly scheming to have large men show up in the middle of the night to remove all of your belongings and also yourself from her house. Real earth/porcelain-shattering stuff.

The Kobayashi mug arrives packaged in a branded presentation box.

Yippee Ki Yay, motherfu- uh...dudes, it's a Die Hard Advent Calendar! Leatherhead Laser Work even laser-cut his clever, original countdown design to depict one of the best scenes in the movie: Hans Gruber plummeting to...

Honestly, The Christmas Movie Cookbook doesn't appear to have many recipes I'll actually want to make - or even request my mama make for me. Old Fashioned Meatloaf from A Christmas Story? Chicken, Broccoli, and Cheddar...

Dude's Most Popular Products of 2018

Dude's most popular products of 2018 followed some very surprising trends. Weapons. Dinosaurs. Survival gear. Star Wars. Sexy time. Crazy, right? It's almost like that year when the most popular name for parents to give...

Halloween Ends is coming to a streaming service near you, and possibly to your kids the moment they see this 35-foot inflatable Michael Myers in someone's yard when they're trick-or-treating this year. And in both cases...

The Scranton office of Dunder Mifflin is now LEGO'd for business. Please see yourself to Michael's office to enjoy a chat with the World's Best Boss, the conference room in anticipation of this being the day the DVD icon...

We've all done it: knocked over a cup of coffee/sodie/water/vodka tonic at work and ruined something important. Like my entire week. Jayme Smaldone and his Mighty Mug cohorts blew out an important office computer with...

Red light, green light, wake up! Or prepare for the Squid Game Doll Shooting Alarm Clock to eliminate you. ... OK, she'll just pelt you with a foam bullet, but still. This piece of Squid Game merch might be the creepiest...

If you have any kind of bucket list, Gift Republic probably has a bucket list scratch-off poster for you. Each piece in the series of 23" x 16-1/2" trackers contains 100 silver-covered boxes with the name of a place under...