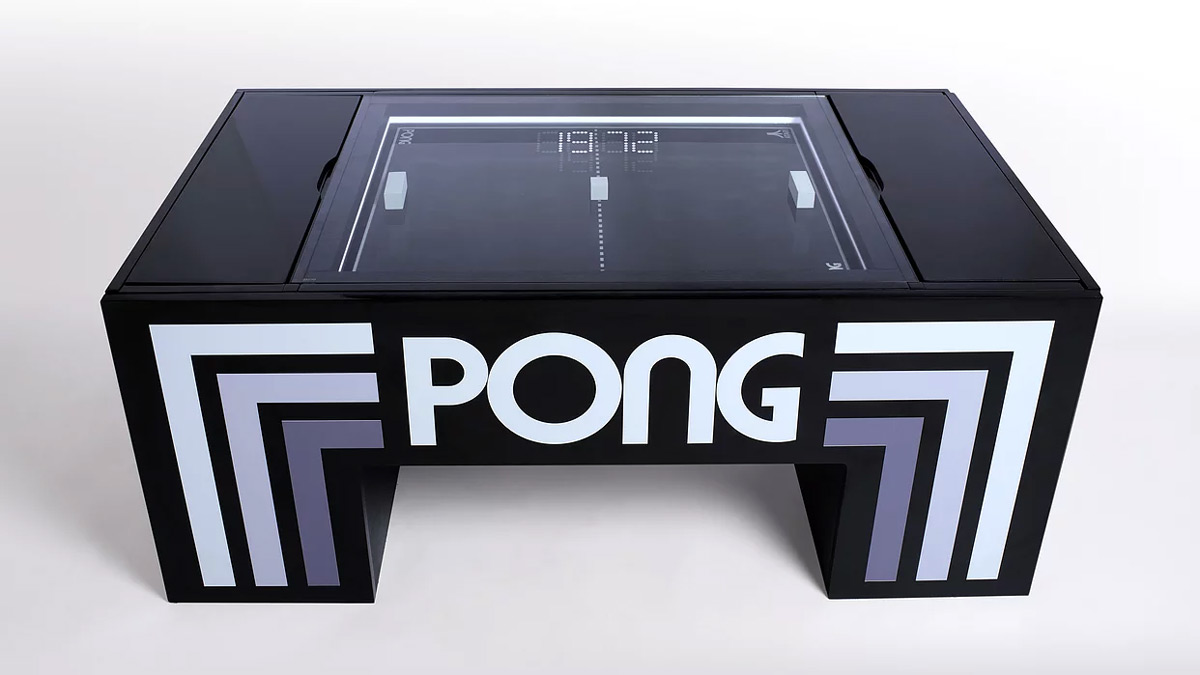 The Atari PONG Table isn't the first example we've seen of an element of the gaming world transformed into a coffee table...that's still fully functional as an element in the gaming world. Remember this Nintendo controller coffee table from 5 years ago? But the guys behind the Table PONG Project did something interesting, and decidedly anti-modern-gaming, with their piece: they turned 8-bit into real-bit. The PONG Table is a physical interpretation of the beloved Atari game whose buttons and wheels control tangible, 3D paddles that whack 3D "balls."

The PONG Table mixes electronics and electric motors with magnetic fields to achieve a playable physical game. Players use a wheel controller to move their paddles side-to-side in an attempt to bump the gliding magnetic cube across its magnetic "field." The addition of buttons allows more precise players to hit curves, and add mods that affect the other player's pad movement (e.g., Freeze, Drunk, Reverse.)

The PONG Table has the game's iconic digital clock displayed on its top, plus rack-mounted USB ports if you want to stream live gaming music.

The PONG Table is currently in its last few days of funding on Kickstarter; if you want one of your own get your pledge in here by April 13, 2017.

The Best 80s Toys You Can Still Buy

If you're reading about the best 80s toys you can still buy, you're probably indulging in nostalgia, and thinking things were way better in the 80s than they are in the 2010s. I don't disagree, but I will say one thing...

When you spill your Coca-Cola, clean it up with...more Coca-Cola! Yuk, yuk, yuk. This Coca-Cola Vending Machine Paper Towel Holder is fronted by a 1950s-era Coke dispenser that would make the perfect nostalgic gift for...

What NFTime is it? It's Bulova Computron D-Cave Watch time. Physical meets Metaverse in watchmaker Bulova's retro-futuristic collaboration with digital cultural space D-Cave, resulting in a timepiece that pays tribute...

While the Nokia 6310 has always been a brick phone rather than a flip phone - and you know how I love me some flip phones - Nokia's 2021 upgraded rerelease of this mobile classic still sends my heart aflutter. Dudes...

Studebaker's SB2140R Portable Boombox is a mashup of the ages. Housed in its prime 80s case are a Boomer AM/FM radio, a Gen X cassette deck, a Millennial CD player, and a Gen Z Bluetooth receiver and transmitter. The...

Next time your kid - or anyone you know under the age of 30 - wishes for a new phone, whip them up a Rotary Cellphone, and be like, "Wish granted!" Then sit back with some Boom Chicka Pop and watch them try to figure...