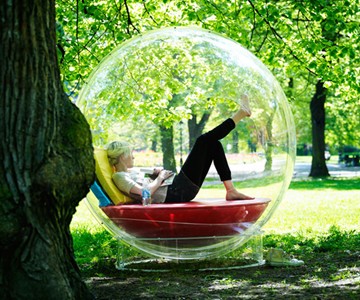 The Cocoon 1 is for that sort of selfish kind of privacy people seek. The kind that means no one can bother or make any demands of them, but they can still watch and hear and pass judgment on what's going on with everyone else. It's Big Brother in a Bubble.

Less cynically, Swiss designer Micasa Lab's Cocoon 1 is the ultimate retreat--plus a savvy marriage of aesthetics and function. Insular and private, on the one hand it protects its inhabitants from external distractions and pressures. But on the other, its 360 degrees of translucence maintain a complete connection to life outside the bubble of one's productive, pensive, or (more likely for me) salubrious thoughts. A host of colorful modules fit inside the sphere, shifting it from a lounging to a sleeping to--with the addition of countertops, a battery-operated stove, and a sink basin--a basic cooking space. Batteries also power optional Wi-Fi and tech components of a media module. At about 71"in diameter, the Cocoon 1 aims to be a room within a room. Big enough to create personal space for the cocoonee, but small enough to fit inside standard four-walled domiciles.

The Cocoon 1 comes with a set of attachments for variable placement on the floor, at elevated angles, attached to the ceiling, or, fitted inside its sturdy nylon net, hanging from the oak tree out back. Three basic modules are included with all orders: the Foundation 360 and two Pillow 90s. Customization options are nearly limitless from there. Storage modules are available in 3 different sizes. A Kitchen module has enough power for 40 hours of light, or 20 hours of light and 30 minutes of cooking. And a Water module connects to the Foundation 360's pipe for liquid outflow.

Micasa Lab anticipates releasing the Cocoon 1 to the public in the Fall of 2013, with an estimated retail price of $2,990.

January 2017 Update: iNyx has now developed its own website. At printing, the online ordering system linked to an iNyx IndieGoGo crowdfunding page here...

If the UK's Spitbank Fort didn't look and sound like post-apocalyptic luxury at its finest to begin with, its location in The Solent, a major shipping route along the Isle of Wight, should cement the status. The Solent?...

The Bird's Nest Bed can accommodate up to 16 people at once. Take note swingers, Mormons, women undergoing IVF treatments, and the Duggar family! The giant basin of comfort was brainstormed and brought to life by O*GE...

Plat of land, plop down a Honomobo. It's what I keep telling my girlfriend when we talk about trading in her condo for a house. See, like the Simpsons, we live in Springfield, and home prices are ludicrous right now...

When the item in question is a house, how do you define "portable"? For me it was always the train car-looking mobile home my grandma's cousin Ella Mae used to live in that could be dragged from city to city in Florida...

Looper pods deem themselves portable, eco-friendly, pimped-out resorts modeled after the ultimate pimp mascot: the caterpillar. Yeah...I would've gone with some sort of spiny-backed reptile or ancient dinosaur or Bowser...

I'm nearly sold on AbleNook, a collapsible housing unit that requires neither appreciable time nor skill to assemble, based on its Kickstarter project's opening quote alone. From Albert Einstein: "We can't solve problems...

Industrial design firm 608 Design and architectural design firm BLDG Workshop teamed up to build the Bunkie, a portable, eco-friendly, prefabricated retreat structured such that the Big Bad Wolf will pop many a cranial...