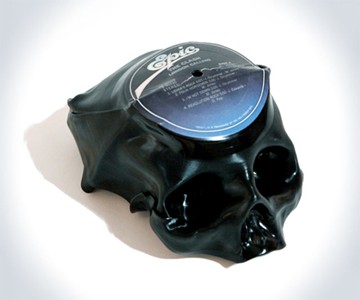 Grab your profundity caps, because multi-media artist Ted Riederer's custom-made Vinyl Record Skulls reflect more than just another opulent expression of punk rock. Their inspiration stems from an essay by Rainer Maria Rilke entitled "Primal Sound", in which the German poet muses over what sounds the human coronal suture would emit as, visually, it bears a striking resemblance to a sound wave. But rather than concoct and conduct extensive experiments to test his ponderings like most good Germans, Rilke uses the observation to develop an analogy and paradigm for making good art: the combination of seemingly disparate elements to produce something the world has never before seen or heard is the foundation for artistic greatness.

And it is from that piece of introspection tht Riederer conceived, gestated, and then popped out in unprecedented cranio-vinyl form his idea for melting and molding old records into human skulls. He calls the project Primal Sound.

Vinyl records in skull form are pricey, but probably because Riederer is no art world hack. An established photographer, painter, sculptor, and musician, his work has been shown internationally, with full exhibitions in lands such as Berlin, San Francisco, New York, Ireland, London, and Bangladesh. Primal Sound skull buyers can choose their own record to have transformed, or select a standard edition Gray Matter vinyl.

Time to surprise my girlfriend with a romantic night by the fire. And a romantic fire filled with human skull fireplace logs. Who knew bone made such fine kindling?...

Another supervillain yahtzee! This black skull armchair was the one prop missing from my master plan to raise an army of babies and eliminate all cats and bike lanes from my township! The only downside is that it does...

Vadim, woodworker and maker of this Wooden Alien Skull Phone Stand, calls his handmade creation "charming." Ha! Not the "-ing" descriptor I would have gone with over "chilling," "disturbing," or possibly for die-hard...

A skull glasses stand, now there's a clever accessory for your lensed accessories. Not to mention a sweet gift for your favorite bespectacled biology teacher, skull-loving goth, deathly cool rock star, or self-important...

A sick skull toilet with LED eyes and a host of smart features called...the WaterThrone? Doesn't really reflect the toilet's sculptural uniqueness, or its creepiness, very well. I would've gone with BoneThrone. The Head...

Metallica's Ninja Star Turntable, a collaboration with Pro-Ject Audio, brings back childhood memories of possibly being afraid of the song "Enter Sandman," and having a babysitter who always played it about 17 times throughout...

Roll the bones, baby! No question why the term applies to these Skull Dice, but do you know why playing dice not stylized to look like human skulls is also referred to as playing "bones"? Yeah, me neither. You should...

MAG-LEV Audio's ML1 levitating turntable gives vinyl enthusiasts a reason to keep their eyes open even as they get lost in their old Sex Pistols albums or throw on a Bob Marley record to chill with a fat joint on the...

This popcorn kernel stuck in my teeth is gonna be the death of me! Ironic, because it looks like one of the toothpicks I need to dig it out was the death of this guy. The Skull Toothpick Holder makes a fun 'n' spooky...

The Skull Bowl is part of Buster + Punch's Travis Barker Collaboration, a collection that also includes candlesticks, cabinet knobs, door stops, drum keys, and pendants. All skulls. All day long. All too available in...

Who wants to skull a beer? The Brainfreeze Skull Beer Glass & Stand holds up to 12 ounces of your favorite brew, cocktail, sodie, or juice, pooling about half of the drink in a skull-shaped "boot" molded out of the bottom...