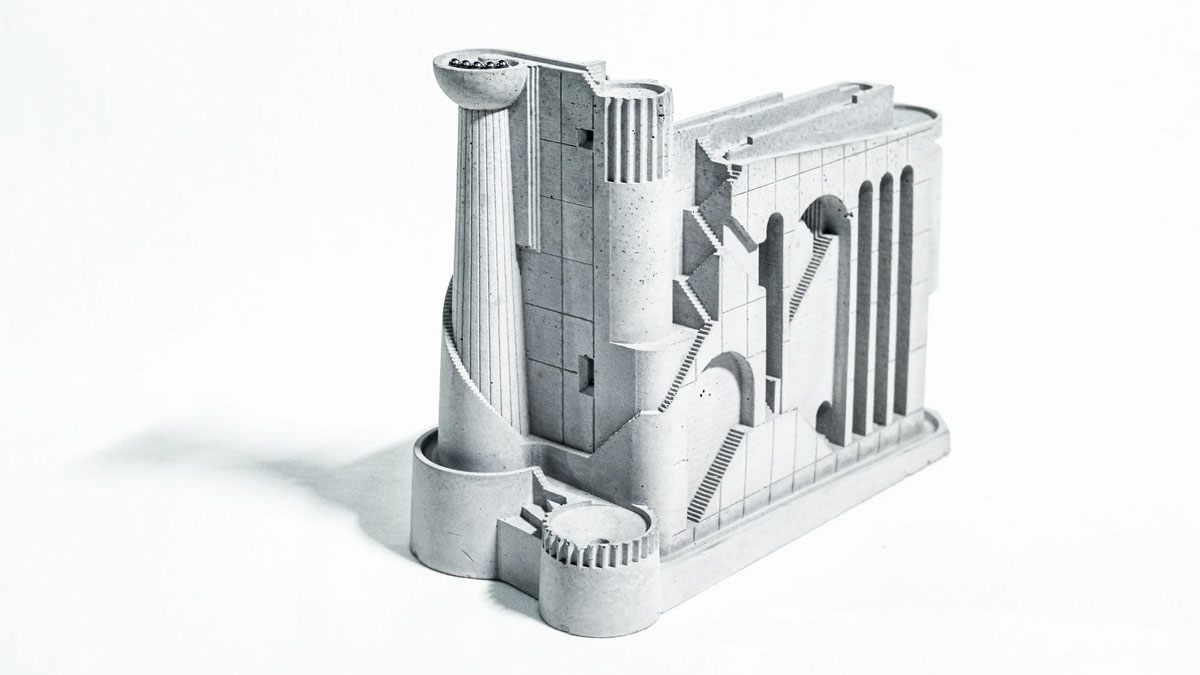 $295.40
from Material Immaterial Studio »
Check It Out

The Factory, Material Immaterial Studio's latest concrete rolling ball kinetic sculpture, is a nod to Brutalist architecture, and our desire to own stuff we can fiddle with to spur creativity, or just take a mental break from work. And I must say, when it comes to desk toys, or household decor in general, The Factory is one of the coolest pieces I've seen in awhile.

While austere in both inspiration and composition, the concrete structure has so many points of interest molded into the stair-steps and spirals of its interior that I forget it's a replica of a cement or steel factory rather than a magical castle. And I can only imagine how once you let one of its 11 steel balls loose from the upper tower The Factory will really come to life. Material Immaterial provides no video of the kinetic sculpture in action - probably on purpose - but also notes "What is particularly fascinating to us apart from the rolling ball, is the patterns formed by the shadows cast by different architectural elements that have been carefully put together to create a drama of these shadows which slowly unfolds as the eye moves deeper into the structure and around it."

In addition to The Factory, Material Immaterial also makes Balls Eye, another brilliant concrete rolling ball kinetic sculpture. Balls Eye does have a demo video, which I've included above.

August 4, 2020 Update: A video of The Factory churning out its steel balls does exist after all - check it out alongside the one for Balls Eye.

You can trust me when I say this Mechanical Metal Jellyfish Kinetic Sculpture from MCA Studio is the coolest thing you'll see all week - all month if you're really into kinetic sculptures or jellyfish, all year if you're...

But can these fire dragons roast marshmallows? Maybe not with their breath, but Campfire Flyers, kinetic dragon sculptures powered by the flames of your campfire, could probably be rigged to hold the sticks...

I definitely wanted a set of MechaniCoasters to appease my fidgety fingers and steampunk penchant, and my wife's naggy inclinations and aversion to anything ring-shaped and wet touching her tables. But then I saw these...

Math strikes again. But when we're talking Kinetrika Square Wave Kinetic Sculptures, math is more of a beautiful dream than a cold-sweat-inducing nightmare...

You. Look. MARBOLOUS! MARBOLOUS, indeed, you mesmerizing marble track going all kinetic with your artfulness on my desktop. The MARBOLOUS marble track is an ode to the popular childhood toy that German BFFs Baffy and...

Equally adept at keeping your more retarded friends locked in as getting them all killed in a fire, the Defendius Labyrinth Security Lock is a pretty cool concept. Wouldn't this be better for impeding entry to keep all...

The serpent is at it again. This time, though, its temptation is a pair of snaking, maze-like water pipes, since it knows you'll need more than an apple to succumb to Original THCin (that said, in a pinch, you can bore...

Escaping a box sounds like about the worst task ever to me. I can't even watch David Blaine do that shit without needing a Xanax. Luckily, Cluebox doesn't require one to crawl inside its 4.7" cubed birchwood walls to...

Holy shit, I'm feeling epically perplexused just looking at this gnarled sphere of chaos. And that's not even the interactive fun part. Inside the visual affront is a little steel ball, which must be wound around the...

According to maker Paladone, the Star Wars Death Star Maze lets puzzle solvers "follow in the footsteps of Luke, Leia and Han Solo by defeating the mighty super-weapon." And if you fail? Guess you'll still be stuck inside...