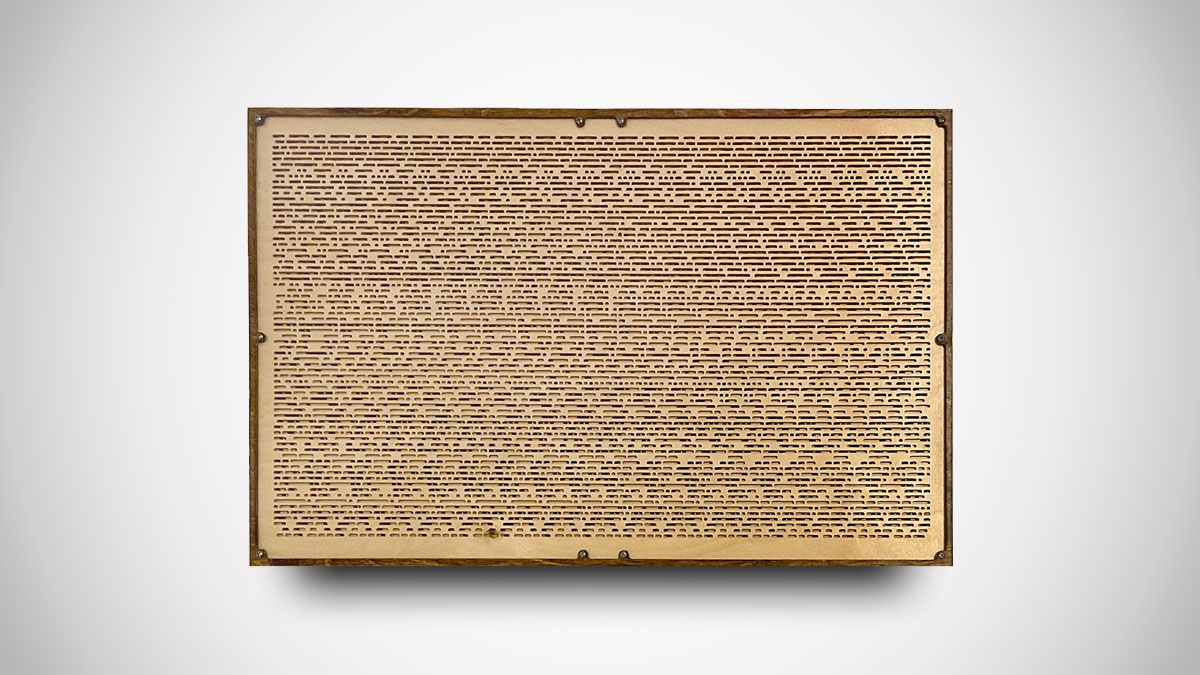 $9
from derekhugger.com »
Check It Out

Nostalgic art meets contemporary techniques - and DIY - in the woodworking plans for the Nymphaea 3D Wood Cutout. Who remembers the Magic Eye craze of the 90s? (Sit down, Gen Z.) These books of 3D optical illusions, officially termed autostereograms, featured trippy, colorful 2D artwork that would reveal a 3D image if (and only if) you had the gift of uncovering it.

Most people could eventually see hidden Magic Eye images if they stared at the piece long enough. I was always pretty good at it, using a technique of deliberately unfocusing my eyes and letting my vision blur, and then when I refocused the 3D Easter Egg would pop! right out. I seem to have lost my touch, though, because I had to blur-refocus, blur-refocus at the Nymphaea Wood Cutout for, like, 5 minutes before I could get its water lily and lily pad Magic Eye image to come out.

The Nymphaea is another Derek Hugger creation, and unique not only for its nod to the 90s, but also for its wood medium, cutout carving technique, and 3D-to-3D concept. That is, the Nymphaea produces a 3D image from an existing 3D, rather than a 2D, image.

Purchasing plans for the Nymphaea will get you two different build options. The first is for 2 layers of wood overlaid to form the autostereogram background. Cutouts for this option should be made via CNC machining, laser cutting, or 3D printing. For those more into woodworking by hand, a simpler, single-layer Nymphaea design is also included. Its design has circular holes rather than elongated slots, to make it easier to do manual cuts with a drill press.

True Mirror - How Others See You

The True Mirror idea is simple (and old; it was first patented in 1887): place two mirrors at right angles and have a look-see. Its effect, though, elicits the complexities of realization spanning everything from Whoa!...

HOLHO. It's like a portmanteau of Holla! and Jai Ho! And the contraption is an Italian design, so we've got some real cultural diversity going on here in the world of holograms. A pyramid-shaped structure that sits on...

I don't know how a real working Invisibility Shield really works, and I don't care. As long as it hides me from solicitors when I lounge in my mama's front yard, my friend Cornelius when I use it to scare the ever-loving...

I've found some choice anatomical optical illusions for your viewing pleasure this evening (or morning with your computer rearview mirror on your monitor at work). Most are just momentary illusions whose true nature is...

I love the dude who makes Grand Illusions' videos. I think his name is either George or Hendrik. Both because George Auckland and Hendrik Ball are the two Brits who founded and run Grand Illusions out of an 18th century...

Novatropes are abstract flower, sealife, and geometric sculptures that get moody when placed over a base with a built-in strobe light. The combination of the moving LED light, a rotating base, and translucent 3D-printed...

The German-made Shtox glass, a Red Dot Design Award winner with a bottom primed for rotational movement, has the patented capability of spinning into infinity at the flick of a wrist. Just like Euler's Disk. Also like...

Where was the TaTa Top flesh-colored bikini with nipples when I was having fun with anatomical optical illusions a couple weeks ago? Guess I'll have to retroactively add this eye-(and pants-)popping swimsuit to my Breast...

Slow Dance - A Frame that Slows Down Time

Imagine a club in Vegas. A go-go dancer. Strobe lights. It's a spectacle of stop motion animation, the fluidity of movement altered by the way the flashes of light play with your eyes. Now scale that scene way down and...

The World Upside Down Goggles

The trickery of prisms strikes again! Here two hunks of Dove plexiglass fit over a pair of glasses' eyepieces to invert all images the wearer sees. Reversing Goggles make for interesting school science experiments, as...