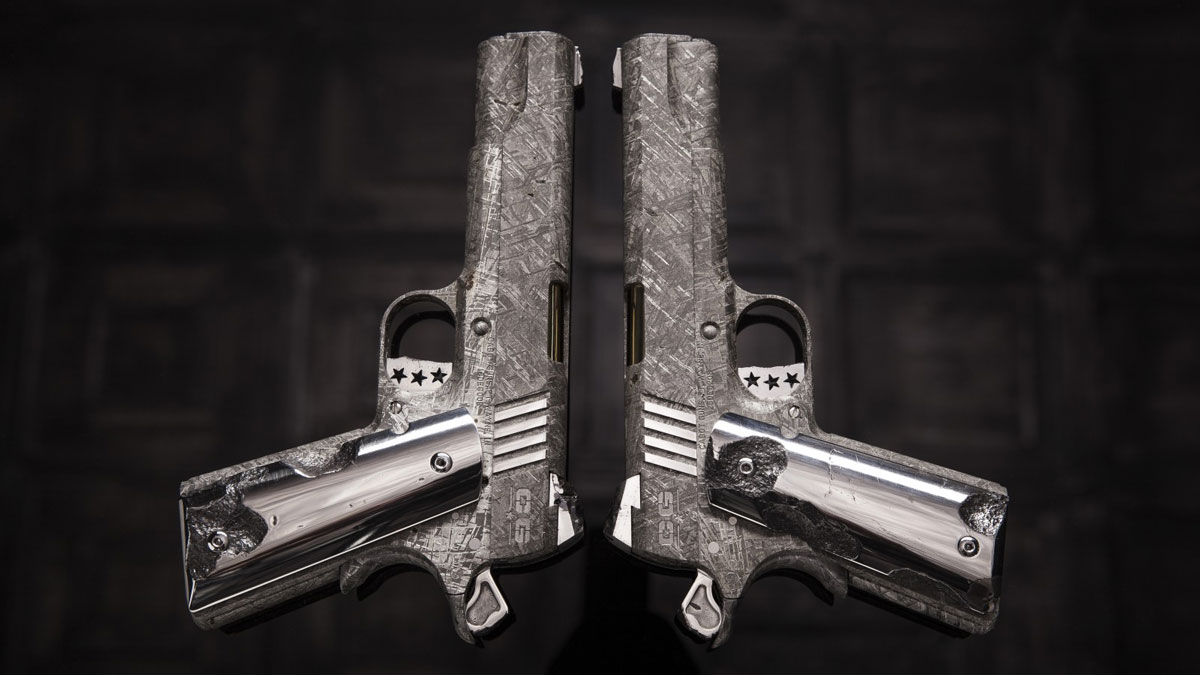 Cabot Guns has forged a few big bangs into its Big Bang Pistol set. The matched left and right pair of 1911s aren't just two of a kind, the only two Cabot has and will ever build (bang!), they're two of a kind made entirely from a 77-pound hunk of the Gibeon meteor (bang!). And they're both fully functional. Bang!

A little background: the Gibeon meteor is an interstellar visitor that crash landed on Earth in prehistoric times, but wasn't discovered by Western civilization until the early 1800s. Having taken up residence in Namibia, the ancient Nama people had been using bits of the meteor's iron-nickel alloy to build tools and weapons for thousands of years. Cabot gots its share in 2015, and began working on their effort to turn space rocks into pistols.

The two members of the Big Bang Pistol Set have National Match barrels so, according to Cabot, they're not just functional, but accurate. Their engineers used electron beam tech to add bimetal support to the frame / slide rails, hammer, guide rod, and extractor. And, yes, 100% of pistol components, including the barrel bushing and trigger, are 100% Gibeon meteorite.

Each of the Big Bang Pistols has a serial number reflecting the geographic coordinates where the Gibeon meteor landed on Earth. Cabot Guns plans to sell the set to the highest bidder at auction. Those interested in owning their own piece of the Big Bang can register for more information on the Cabot website.

Like the prehistoric and outer space themes, but not into guns or spending insane amounts of money to own a OOAK set? Check out these meteorite & dinosaur bone rings.

You look at the replica M41A Pulse Rifle from Aliens, its fully adjustable metal stock and removable magazine, and wonder, Is it real? It looks real. It's the right shape. It's...huge...definitely the right size. It moves...

I don't know how to shoot a gun, or really even how to hold a gun without soiling my pants, but I bet if someone put one gun in my hands and another to my head and demanded I use the former to fire at a watermelon dangling...

Goblin Paintball agrees with Arsenal Firearms: Why get a pistol with one barrel when you can get one with two. In Goblin's case, the double barrel pistol is the Deuce, an air cartridge issue that can launch a terrible...

As we prepare to honor the USA with a day of drinking beer, eating potato salad, dinking around with bottle rockets, and setting fire to the sky, the Four-Barrel Underwater Dart Gun would like to remind us we should also...

Tippmann calls their TiPX a "true military-style paintball pistol", which is cool, but also surprises me because I have always been under the impression that the military uses guns that fire real bullets. Compact, lightweight...

Anyone need a standard-issue S.T.A.R.S. line of defense? San Diego's Kendo Gun Shop has replicated Albert Wesker's customized Samurai Edge as a superbly realistic Airsoft Handgun for the awe and admiration of all Resident...