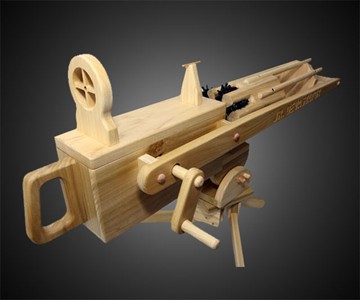 The Junior Devastator is an 80-shot rubber band gatling gun that "sprays rubber bands like a hose sprays water." Two points on that. 1) I wonder what Daddy Devastator looks like. 2) The JD is the third, and probably the most visually and functionally impressive, rubber band gun we've shown you. However its predecessors, the Bandit multi-action rubber band shotgun and the Rubber Band Machine Gun, each cost between $940 and $975 less than the Devastator. Granted, the two former are sold as DIY assembly kits, but I have to question what elevates this automatic firer of an age-old office supply to such levels of pecuniary grandeur.

If you want to know about the best projectile launchers, you're probably getting ready to orchestrate a cubicle warfare offensive at work. Or maybe you just need some new catapult- and slingshot-shaped desktop toys. Or...

Rattlin' Randy Riffenburgh owns the dual titles of Falcon Slingbow Creator and Falcon Slingbow Sniper. He developed the patent-pending, arrow-shooting slingshot for hunting, fishing, and target shooting. And he reigns...

The Zubin is a walking stick. That can also chop firewood. Or spear a fish. Or pop my friend Cornelius in the back of the head with a slingshotted acorn. Ping! That'll teach him to walk faster than 2.7 mph. Equally appealing:...

This is a Cold Steel Big Bore Hunting Blowgun. It is 4' long with a 3mm barrel and target-style mouthpiece for firing .625 magnum darts. No cheap materials or shoddy assembly here either. Made of polymer, rubber, and...

Mr. Stay Puft's got nothing on my Mallow Bow. Sure, he can stomp on people, toss cars, and tear down buildings, but I can dole out cavities, high blood sugar, and toothaches. Straight to the kisser from 60' away!...

Archers, bowhunters, bowfishers, people who like to sling mud get one tool for all their firing needs in The Hammer. This slingshot /slingbow invites sportsmen to practice multiple shooting disciplines using its adjustable...

Rochan-bo you for first go with this gnarly-looking slingshot, Cornelius. Rochan calls their namesake slingshot a "professional outdoor catapult" and launches its description with, "First, this slingshot...is not a toy...

Chest bumps, head butts, and sharp kicks to the shins unite! The Human Slingshot is here to bring new meaning to the lead-in, "Guess who I ran into the other day?" The human-sized stretchable band, 4 close friends (or...