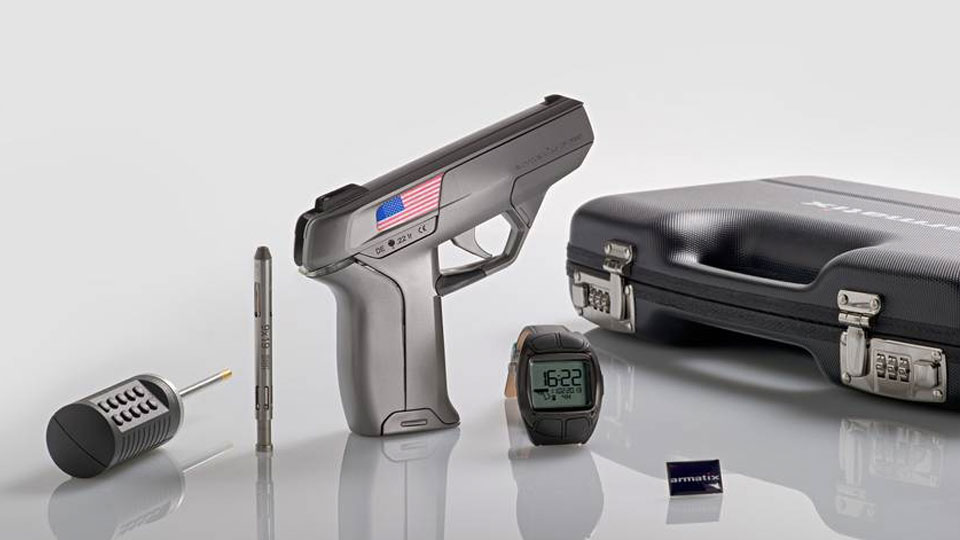 Looks like James Bond and Data from The Goonies are finally making good on that collaboration they've been talking about. What we have here is a smartwatch-controlled pistol. A gun that will fire only if it is within range of its Casio-esque digital timepiece. When radio contact between the two is lost--if the gun is stolen or knocked from the shooter's hands--the pistol automatically deactivates itself. Parent company Armatix has taken a special interest in gun safety, their latest development being a suite of forthcoming precautionary implements called the Smart System.

Perhaps the most desirable Smart System acquisition will be Armatix's iP1 Limited Edition Set. The package includes the company's iP1 Pistol, iW1 wristwatch, and Quicklock mechatronic blocking device with digital key. The .22 caliber iP1 Pistol will fire 10-round magazines, but only at an operating distance of up to 10" from the user's connected iW1 smartwatch. In addition to capabilities of arming/disarming the pistol, iW1 will come with features such as:

The Quicklock element of Armatix's iP1 Limited Edition Set pairs a blocking device manually inserted into the pistol's cartridge chamber to lock the weapon from within, and a digital key to release it. Once a link is established between the blocking device and key, the user authorizes release with a PIN or fingerprint, and the key transmits necessary release data. The blocking device is then ready for manual removal. Note that Smart System's Quicklock is available for all calibers of firearm conventionally available for purchase, not just the Armatix iP1.

A real "blast" from the past. In a clever display of grooming irony, users shoot this vintage 357 Magnum Hair Dryer at their heads to avoid committing style suicide. We can see it now, the biggest public service campaign...

The Havenshield Door Barricade is a home security device for quickly blocking interior access to intruders. It installs over any standard door in your home (or office or classroom) like a wreath. Not exactly a bearer...

Ladies with a vendetta, or a penchant for jewelry that also serves as a weapon, I'm afraid you can't buy the Femme Fatale Ring Gun. (Unless the person who paid $11,350 for it at auction would be willing to sell it to...

Cabot Guns has forged a few big bangs into its Big Bang Pistol set. The matched left and right pair of 1911s aren't just two of a kind, the only two Cabot has and will ever build (bang!), they're two of a kind made entirely...