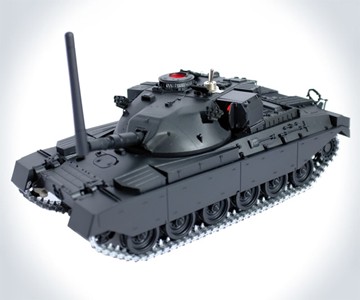 Julian Oliver's No Network cell phone signal jamming BATTLETANKMOTHERFUCKERRR! is not in production or for sale or making appearances anywhere outside of its gallery setting. And even if it were I would not tell you where or how to buy one because apparently mucking up the mobile network of everyone within a 20- to 50-foot diameter of your network mucker upper (disguised as a BATTLETANKMOTHERFUCKERRR!) is illegal in most countries, and I am tired of getting yelled at for spreading the knowledge and purchasing details of these types of inventions by you guys and the po and my mama. So let's all just enjoy the No Network concept, engage in some healthy debate about the invasive and handicapping nature of its use, and then go fix me some steak fajitas and strawberry-cream cheese tart for dessert.

At the flick of switch, No Network scrambles nearby cell communication signals and implements a "blanket ban of mobile telephony in its presence." No mas calls, texts, Facebook updates, or 60-point plays on Words with Friends. The second in Oliver's series of "cyber warfare" and "cyber weapons" explorations, the tank obviously takes its shape as a literal manifestation of the human ability (and desire) to stifle our enemies with technological combat. The effect in this case? The consequence of being cut off from our smartphones? Isolation. A sense of helplessness. Societal exile. Just like how in the olden days the French banished Napoleon to Elba, and the British sent all their convicts to die on a big empty island. Except in the latter scenario, we ended up with Australia, which is like a thousand times better than England, so I guess the whole "You're neutralized" thing can work out alright sometimes.

The No Network tank was built from hundreds of parts as a 1:25 scale model of a 1966 British Chieftain. Its jammer disrupts communications in North and South America, Europe, and Asia in the following ranges of cell signals (including 3G data packet networking):

Oliver plans to create two additional tanks for his series, one of which will block communication of GPS location services, and the other WiFi networking.

Technically, these 14-Inch Industrial Grade Glow Sticks are made for camping, power outages, and emergencies, but I know you dudes take one look at them and think the same thing I do: Schvrmmmmmmm! Kwishuuuuuuuuuu! Let...

January 2017 Update: iNyx has now developed its own website. At printing, the online ordering system linked to an iNyx IndieGoGo crowdfunding page here...

The perfect Instagram post or TikTok video is just a wallet-sized phone tripod away. This ultra-thin, 0.4-ounce phone stand and positioner is a piece of pocket EDC for snapshot snappers and footage fiends of all kinds...

As phones get smaller and smaller and cases for these tiny phones get bigger and bigger, we still have one threat to our precious 21st century life support. And that threat is water. H2O. The deadliest substance known...

It's about that time of year. The time that anyone with a new roommate starts to assess exactly how he or she feels about said roommate. Best bud, mortal enemy, tolerable nuisance, unfortunate insertion into the human...

The Cocoon 1 is for that sort of selfish kind of privacy people seek. The kind that means no one can bother or make any demands of them, but they can still watch and hear and pass judgment on what's going on with everyone...

Privacy crusader Adam Harvey builds off of his last experiment with fashion as a means of confidentiality, CV Dazzle, with a new line of counter surveillance clothing termed Stealth Wear. While the CV Dazzle system focused...

The Hushme is like the Baby Muzzle for adults! Of course, they spin it that the (Bane-approved!) voice mask and muffler serves wearers and their privacy while taking phone calls in public, not that it protects all the...

Dutch artist Paul Seger's Stealth Pavillion is an art installation and thematic exploration of heterotopia, the idea of anti-space within a expressed context. I know. I hate it too when people define a word that doesn't...