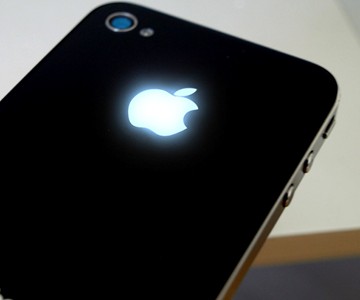 Get ready to radioactivate your iPhone. British iPhone "enabler" iPatch is set to release a glow modification for the rear apple on iPhone 4S models within the month. That means incoming calls, texts, alarms, and other alerts will illuminate the back of your phone with a glow just as angelic and enthralling as...well, it's a tie between the gleaming apples on Macbook lids, and your mom. The implant takes less than an hour to install, so depending on how much you are willing to spend on shipping to Leeds Shopping Plaza in the Motherland, pre-op, post-op, and recovery periods could all run their course within a week. Also, the mod uses phones' original rear casing, so you won't get yours back all fattened up from exposure to foreign delicacies.

The cost to make rear apples radiate is still to be determined, but will run somewhere between $80 and $160, dependent on mass production costs. If you're in the US, and don't want to be without your little precious for a month, I'd allow another $50 to $75 for shipping costs, because one time I tried to send a bag of Tostitos lime flavored tortilla chips to Ireland, and I'm pretty sure it cost me about the same as a year's supply of Tostitos lime flavored tortilla chips. If you don't want to spring for the overseas logistical complexities, in time, iPatch plans to release an export franchise kit to trained repairers around the world.

Again, the rear apple glow mod will be available just for 4S series phones. It will produce no noticeable drop in battery power, nor heat the back case and singe Apple's logo onto your palm. The light stays on only when the screen is on--if the phone is on standby, or you're Tone Loc old school and still hold it to your ear to talk, it will remain in snooze mode. The modification voids Apple's warranty, but iPatch promises it is completely reversible, and comes with the company's own 90-day warranty. Glass plate covers are available in black, white, or custom colors for those who so desire.

People seem to love their iPhones. Almost as much as they seem to love to bitch about them. Damn autocorrect, good-for-nothing maps, battery life of a gallon of mocha almond fudge in the hands of pregnant woman, innate...

Technically, these 14-Inch Industrial Grade Glow Sticks are made for camping, power outages, and emergencies, but I know you dudes take one look at them and think the same thing I do: Schvrmmmmmmm! Kwishuuuuuuuuuu! Let...

This Trigger iPhone 5 case looks heavy. Like I'll either develop a disproportionately muscular right arm from lifting and holding it to my ear, or I'll finally succumb to one of those GD earpieces I hate so much* because...

There's nothing particularly funny about the iWALK LinkPod Portable Charger, I can't not show some Fozzie the Bear love after seeing the name. So here goes: the LinkPod is a 4800mAh fast-charging power bank you can stuff...

As phones get smaller and smaller and cases for these tiny phones get bigger and bigger, we still have one threat to our precious 21st century life support. And that threat is water. H2O. The deadliest substance known...

How do you say Shazaaam! in the interior decorating world? I bet my mama wouldn't get so mad at my dad for wanting to put the electric blanket on the bed starting around September 15th every year if their electric blanket...

iStash. Quite the restrictive--albeit clever and sort of fun to say--name for an iPhone imposter that's really just a slick combination of a pseudo-phone and a wallet. I mean, sure, it will covertly house cigs, lighters...

You can't buy a DRAS foldable smartphone yet, but the flexible touchscreen technology it uses is at least a little more than just a pipe dream. DRAS stands for Digital Resistive Area Sensing, and it's a real system in...