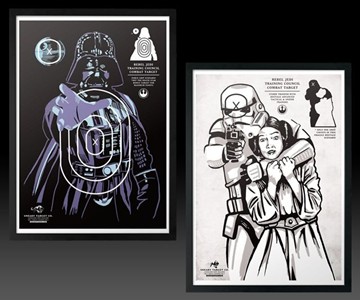 Apparently, we're allowed to take aim only at the Dark Side. Sneaky Studios didn't design any of their Star Wars shooting targets with Luke or Han or Yoda behind the bullseye, which in a way cuts out an entire buyer demographic, but also in a way is only right because ethically it's OK to promote violence against the bad guys, but not OK to promote violence against the good ones. Though in that vein, Vader represents a bit of a moral conundrum, doesn't he? Do we really want to put a bullet/blaster beam/saber in the heart of a man who has the potential to repent? And who, in that repentance, will end up destroying the evil entity he helped to build? Uh...this is too much for my brain to maneuver around right now...ever...so how about we all agree not to buy the Vader target, or buy the framed version and refrain from shooting at it, and go for Sneaky Studios' other, clearly evil Star Wars characters instead:

Why doesn't my Cubicle Warfare book include a chapter on How to Build a Micro BB Crossbow? Not that I wouldn't get fired for using it at the office. But we've had these "productivity enhancement strategy consultants"...

The Compact Folding Survival Bow, or CFSB-1 for the acronym happy (I think the "1" indicates it's #1 in the world, like America or Megan Fox in a Supergirl outfit), is a patent-pending one-piece takedown bow milled from...

A stormtrooper who's packing nothing but Jameson and a Buttery Nipple is my kind of stormtrooper. I bet in whiskey decanter and suspended glass forms they're even a decent shot. At least until round 7 or 8 when your own...

UD Replicas makes some sick motorcycle suits, agreed? But although many send happy rushes of dopamine through our bodies during viewing, actually wearing them for anything but Halloween or Comic-Con could come across...

See No Evil, Hear No Evil, Speak No Evil Stormtroopers

My favorite thing about these See No Evil, Hear No Evil, Speak No Evil Stormtrooper figurines - aside from the fact that we're talking about them on Star Wars Day - is the See No Evil Trooper who looks more like he's...

The good news is this is the first ever Standard Line version of a Star Wars: The Force Awakens First Order Stormtrooper Helmet, and you can have one for $200 ($249.95 if you wait until October 1 to order). That bad news...

What took them so long? Although I'd prefer an Augustus Gloop drowning in chocolate bar, Han Solo's plight lends itself nicely to aiding in the fattening of America as well. Jabba The Hutt, although posing no long term...

Target practice with human targets seems so cruel (although practical since most of the time it's other people that are getting shot). Why not practice drilling holes in things that are already dead and will probably...

Latex Star Wars Stormtrooper attire comes in a variety of cuts and styles so that all body types can find one that's suitable and flattering. And if you buy that I've also got an instant, no-fail national economic recovery...