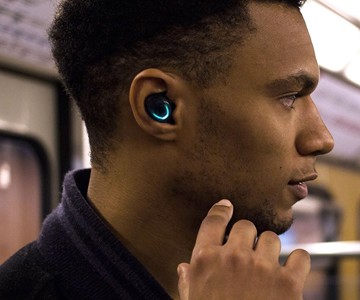 The Dash is a set of wireless in-ear headphones. It's also a self-contained MP3 player. And a Bluetooth headset. A microphone. A USB stick. A heart rate monitor, fitness tracker, sports watch. It has the capabilities of at least 5 different pieces of equipment yet it fits, securely and ergonomically, right inside your ears. Maybe it's bigger on the inside.

Headphone wires that tangle, catch, and always, always break are the most obvious enormous pain in the Adam's apple the Dash addresses. The discreet earphones play back stereo sound completely cable-free. The buds themselves can serve as your MP3 player, storing and playing up to 1,000 songs with their 4GB of storage so you can truly walk, run, or capoeira in the public park without having to carry or attach an audio device. Or, for easier playlist access and increased visuals, the Dash can also pair via Bluetooth with a smartphone, transmitting your jams as simple wireless earbuds.

And if you happen to get a call while rocking out on the bus home from work, the Dash's embedded microphone will step in and enable you to use it as a Bluetooth headset. (Dash creator Bragi notes the mic is impervious to background noise too since its functionality is based on mechanical vibration generated by your voice from the ear bone.)

The Dash is compatible with iPhone 4S and up, iPad 3 and up, Android phones with Bluetooth 4.0 LE support, and a limited number of Blackberries and Windows phones. Each 1-hour earphone charge (USB) lasts for approximately 4 hours of play time, and 250 hours of standby time.

Where to Get the Dash

I don't know, I think this Dash may really be the audio-sensory version of the TARDIS. I hope it A) works and B) doesn't fall into the black hole of Kickstarter projects that raise enough money to buy me a Batmobile, and then have nothing but problems getting the idea made and shipped to backers. Speaking of which, anyone who feels the Dash hype enough to back it can do so on Kickstarter through March 31, 2014 at a reduced cost. Anticipated shipping date for early supporters is November 2014.

APRIL 2016 UPDATE: Now you can get the Dash from the same place you get everything else. Amazon, dude. Dash raised almost $3.4 million on Kickstarter, made it to production and (presumably) filled all of its Kickstarter backer orders. Now it is available for you and all your friends Cornelius to purchase directly through the AMZN with free shipping.

Muchas danke to Bless This Stuff.

GravaStar has some Sirius sci-fi and Sirius cyberpunk for audiophiles in their Sirius P5 Earbuds. The company says it's the first to offer interchangeable cases to house and charge wireless buds, and their debut line's...

Looks like Helmfon Jr. is playing with Daddy's noise-cancelling helmet again. Don't worry, kiddo, you'll grow into Darth Helmfon's sound absorber and privacy sphere soon enough. And then all the power of the Audibly Dark...

Know what a Berkeley education gets you? The ability to mastermind genius ideas like cat ear headphones. And also the impeccable taste to select an incredibly hot Asian girl to model them. UC Berkeley alumni Wenqing Yan...

GPods, self-described as the world's first earbuds with light control, could be simple earphones with red pill / blue pill-looking baubles that flash your favorite LED colors light one of those smart light bulbs, or a...

The Walnut Moto Hint earbud looks like my mama's dining room table. And the Bamboo one like the living room floor. Black Leather desk chair. Dark Fabric foot stool. Thanks to Motorola, I'll soon be walking and talking...

Batband is a headband that transmits sound through your skull bones. Think that sounds weird? And that the earless headphones look even weirder? Agreed, but...a few points:...

Conduction Labs Allegro Earphones send audio right into your earhole without ever touching it. Kind of like how your brother used to dangle his finger in front of your face, sending peak levels of annoyance and rage right...