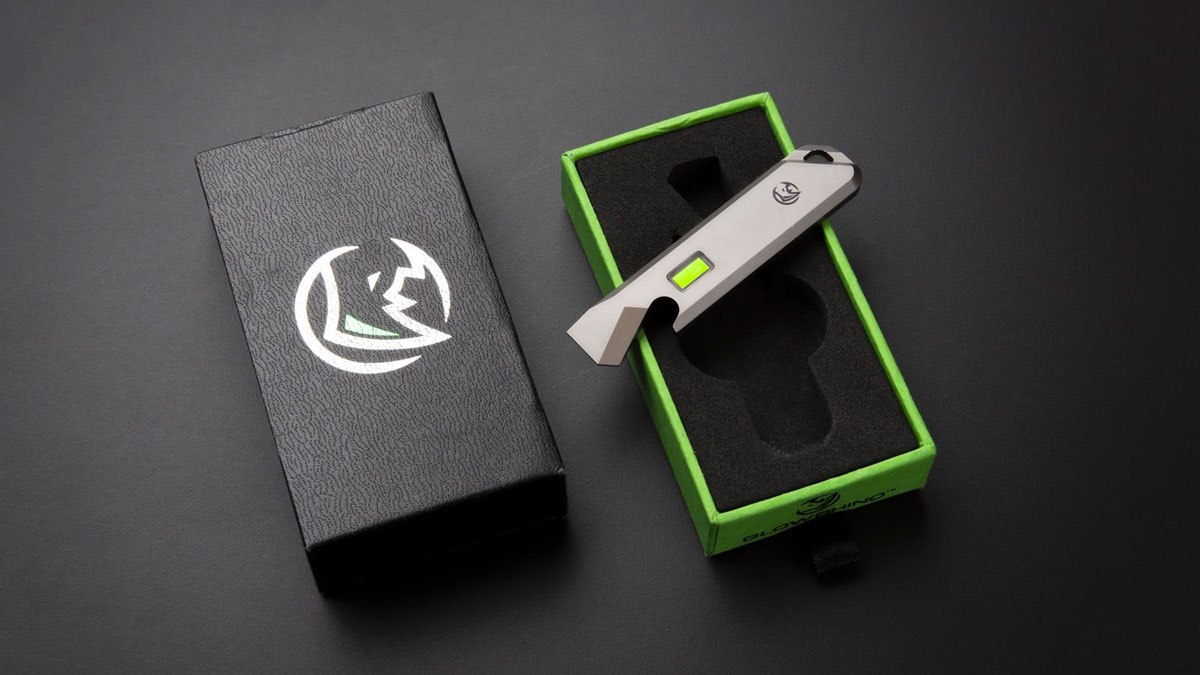 Sure, Glow Rhino's tritium-studded tools will add some swagger to your EDC. But when things go dark, and the self-powered light source kicks in to glow neon bright as a beacon to your keys, your beer cap, your roaming dog, it's Glow Rhino's value as ENC that will truly shine.

We've seen a lot of tritium products around here, and Glow Rhino's dealings in everyone's favorite radioactive isotope of hydrogen aren't just equals or betters to them all, they've likely been around much longer too. Based in Detroit, Glow Rhino has been working with tritium for over 30 years. Legally even! The company's shop offerings - at printing, a Glow Fob and Pry Bar, with more to come - reflect as much, with EDC pieces boasting solid construction, elegant industrial aesthetics, and striking integrations of tritium vials and lamps. And I'm not just blowing radioluminescence here; I have both the Glow Fob and the Pry Bar, and give them 1 proton and 2 neutrons up.

The Glow Fob features a cylindrical tritium lamp inside a CNC machined stainless steel cage coated in black nitride. Add it to your keychain to shed a little light, as well as give you instant access to the fob's glass breaker tip.

The Glow Rhino Pry Bar is made of titanium, with a rectangular tritium insert embedded in its business end. In addition to using it for prying (go back to work, Karen, not that kind of prying) the bar serves as a bottle opener, flathead screwdriver, and scoring tool.

Two things. One maybe you already know, one probably you don't. 1) Tritium is a radioactive isotope of hydrogen, and its natural occurrence on earth is extremely rare. However, the dopeness that is humankind can produce...

OK, this is like the Goldilocks & the Three Bears of tritium keychains. The first set we featured was by far the coolest and most coveted, but also the hardest to acquire. Many readers deemed the task impossible. Then...

In many senses, Glowrings have nothing on the tritium keychains we previously showed you--the ones super-sickly designed and flawlessly handmade by a dude who goes by the name of iknitsteel (though I think his mama calls...

Tritium watches might be the most attainable alternative to the elusive tritium keychains we showed you last year, as well as to the even more elusive tritium girl I tried to make out of a 3D printer, a Barbie doll, and...

The Rings of the Gauntlet of Power

Some people find inspiration in nature. Some in music. Or love. Or lust. Jarvis Latteier speaks my kind of inspirational language though, finding his in the universe of Marvel. Here, Latteier has 3D-fabricated his interest...

MecArmy has made a formidable Titanium Tactical Ring for dudes. In addition to its industrial, and sort of intimidating, design, the ring make the perfect gift for a man who enjoys the intense glow of tritium, the satisfying...

These Radioactive Glass Marbles remind me of a New Year's Eve tradition / superstition. Some say if you can eat 12 grapes in as many strokes of midnight when the year changes over, you will have good luck and prosperity...

Just as the Bride conquered O-Ren Ishii with a Hattori Hanzo katana, Metal Worn has conquered the ultimate gift for a geek with their Ti-Katana, a miniature titanium katana sword whose tsuka contains a tritium vial insert...

The bad news is that this titanium glow-in-the-dark fob is not fitted with a vial of tritium, and therefore does not glow without help, shine brighter the darker it gets, and have a half-life of 12.3 years. The hand-made...

The Glo-toob is a banded top for ladies that burns swooning neon green, blue, red, white, or amber straight from their chesticular areas to your heart. Oh wait, no. Wrong glowing product that sounds like "boob". Correction:...

Plunge into darkness, or dark waters up to 100' deep, without ever losing track of how many minutes it is until Better Call Saul starts with Traser's H3 Translucent Tritium Watch. The Swiss watchmaker so named its time...

The Cypher Automatic wristwatch, according to maker Xeric, "plays with the positive and negative nature of time" with a design of die-cut hours and laser-cut minutes overlaying the watch's black hour and colored minute...