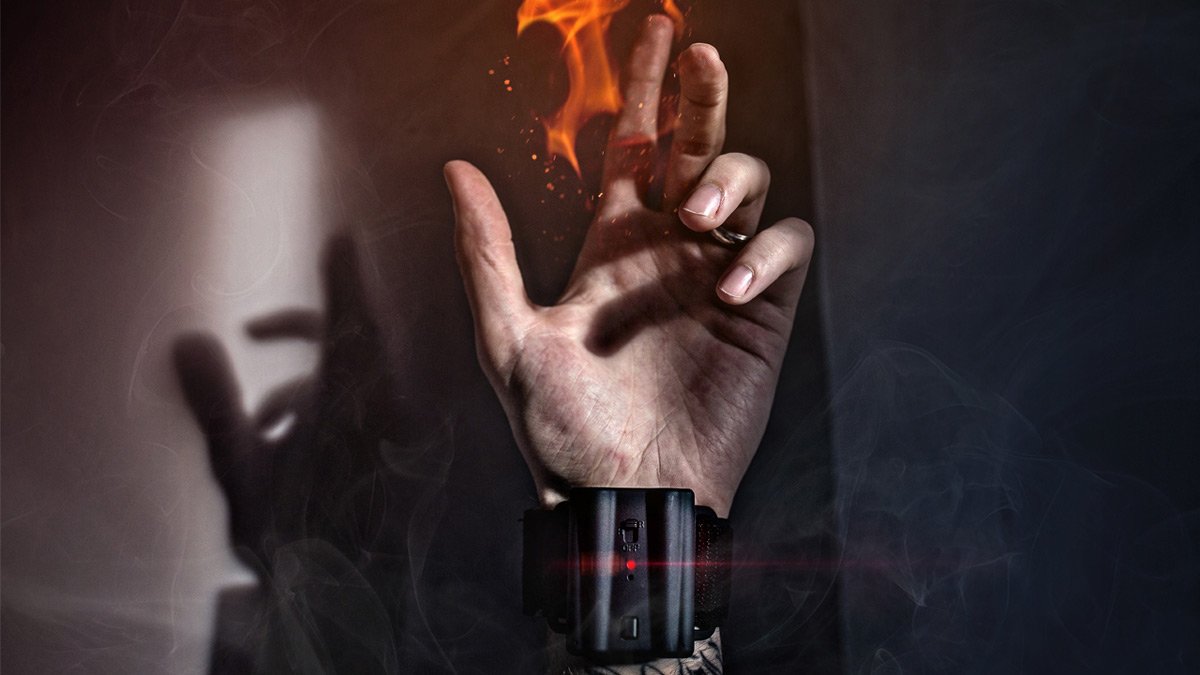 Shooting fireballs from your empty hands just got a sleeker, slyer, more compact upgrade. Ellusionist, by way of magician Adam Wilber, introduced the original Pyro open-palm fireball shooter around this time last year. Its wrist unit contains 4 separate chambers, individually triggered for multiple shots, and each detonated by a remote device. Fireball kindling comes in Flash Packs, a treated tissue paper that burns super fast and disappears just as quick. The Pyro Mini pulls all the same tricks, but with less bulk to make it a less obvious badass source of your badass sorcery.

Ellusionist reports the Pyro Mini has also been streamlined for easier use and comes packed with "a host of new features that rival anything you'd see in a James Bond movie." In addition to being 50% smaller, the Mini has a built-in trigger on the top of the device, so you don't have to hold a separate remote trigger (though you still can). It is also USB-rechargeable from a laptop, rather than battery-operated. But the best new Pyro Easter Egg is probably its Burst Fire feature. Hold the remote or trigger down for a few seconds and turn your unleashed mono-ball of fire into a tag team. Two great balls of fire!

Yeah, it costs more than twice the country's 2011 median income, but two little words make it worth every penny: Street. Legal. If you can convince the bank, or your mom, to spot you the cash, a living, breathing replica...

Tramp not included. The Indo Trick Trampoline Scooter is a wheelless board-and-bar design made to help scoot enthusiasts practice freestyle tricks, plus come up with new ones. I'd say it's a safer way to learn Triple...

MK Lighter's Outdoor Series of their windproof jet flame pocket lighters are both most pleasing to the eye, and most igniting to your BBQs, lanterns, candles, and campfires. Just don't get so taken with their cool colors...

These Harry Potter Wands that shoot real fireballs are here to wish you and yours a Lumos!, an Incendio!, maybe even, if you don't follow fire safety practices, an Avada Kedavra! Halloween!...

The Secret Lives of Superheroes Prints

Greg-guillemin reigns supreme: Best Paparazzo Ever. I knew Wonder Woman's rack wasn't real. But I have to say, I definitely took it for silicone over Kleenex. Her tissue-molding skills are impressive. Superheros may pick...

While I would prefer a wax color more masculine than pink, I--What? Pink is the color of unconditional love and nurturing? Oh. OK, Mama.--I guess my mama likes pink. Yep... Working from home today... Anyway, I applaud...

Tesla Coil Lighters are just one of your options if you're looking for a flameless, wind-proof lighter, but I think they're the cleverest looking. Simple, industrial exteriors with flip-tops that expose nifty arced coils...