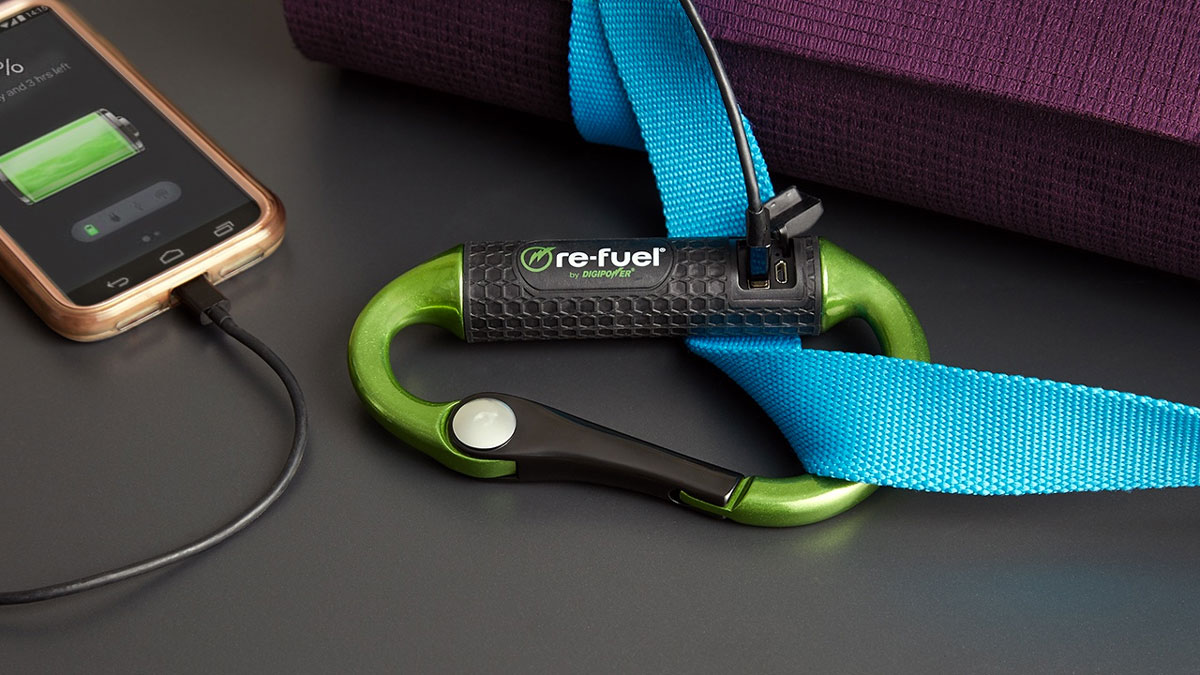 Powerbiner. Sounds like the next movie from the creators of Minions. But though this carabiner power bank is pretty cool, it's not so cool it landed a starring role in Hollywood's next blockbuster animated film. Yet. They do seem to be running out of interesting characters and storylines though, spawning the trend of turning animated classics into live-action features a la Dumbo and Aladdin instead of coming up with new material.

Anyway, about the Powerbiner, what it really is, and really does, yep, it's a 3000mAh portable charger that's especially portable because it's shaped like a carabiner. And not just in show. Its physical strength matches its technological strength: hooked up to your phone, tablet, camera, or any other USB device the Powerbiner can pump out 11+ hours of video time, 10+ hours of talk time, and charge your phone twice before it needs its own recharge; hooked up to your bike, backpack, or stroller it can lift and hold up to 132 pounds.

The carabiner power bank from Re-Fuel comes in green or purple, and is designed with overcharge and short circuit protection.

The KeyBiner calls itself a more refined version of the carabiner, but you might recognize it as a more souped up version of the KeySmart. Both remove some of the bulk and all of the jangle of schlepping around a fat...

The Not For Climbing Spring-Free Titanium Carabiner

Design The Everything isn't messing around with The "Not For Climbing" Titanium Carabiner. Neither in their nifty spring-free, pin-free design that uses flexure to open, close, and bounce the carabiner back to its original...

Half-carabiner...half-firestarter. But stronger than both. Ahhh, the Firebiner hybrid is a multi-tool straight out of Underworld...

When the Doctor and M.A.D. Cat are breathing down your neck...Go-go Gadget CaraClaw! A recent release from EDC and survival tools specialist StatGear, the CaraClaw brings together clipping and cutting in a 2.8-ounce carabiner...

Cheap EDC, meet everyday works of art. At least in the minds of the carriers willing to pay for these Bolt Carabiners from EDC Apparatus. Designer Josep Julian makes the sexy links in his shop in Alas i Cerc, Spain, using...

The MTech credit card multi-tool doesn't have a huge multitude of functions, but its basics are solid:...

A clip and a snip, a link and a slice. That's what RovyVon's U4 Titanium Carabiner Keychain with Folding Utility Knife brings to the EDC table. Or rather, your pocket, belt loop, or bag strap...

Onegee Bungee to rule them all. Really. According to the makers of this adjustable bungee system, without the restrictions of a set length and stretch you'll find thousands of applications for the cords and their slide-and-lock...

The Key Titan puts your lock openers on the lockdown. A neat, compact, jingle-free keychain with a carabiner skeleton, the Key Titan series organizes between 5 and 10 keys into a slim and secure block...

More than a watch and more accessible than your phone, the Dakota Knife Clip is a multi-tool growing out of a carabiner providing latchable, fast contact with a clock, knife, scissors, LED microlight, and compass. The...

We've seen plenty of foldaway keychains before, but I like the KeyKlip's rugged, flat plate design and carabiner edge to some of the longer and narrower versions. The basic KeyKlip has an interior KeyDisk that holds up...