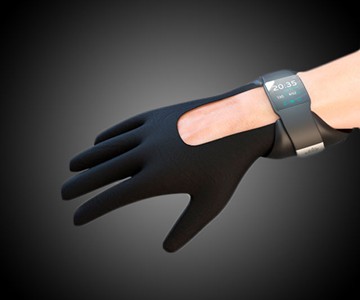 It's hard to tell if there's a working prototype of the Nuada glove out there, of if the hand strength enhancement system exists only as a concept with renderings. The video, which would be a terrific place to demonstrate a working prototype, is just 2 minutes' worth of cartoon people losing their hand strength, and then regaining it with a cartoon Nuada.

Apparently, the Portuguese company did demonstrate a functional Nuada at Disrupt SF this week, but it has a long way to go, and a lot of leather and lycra to shed before it looks like the sleek, streamlined renderings, and the company's description of the glove.

Nuada's designers say it can provide a boost in hand gripping, lifting, pushing, and pulling strength for those who have lost some or all of theirs, or for people who just want performance enhancement without fatigue and strain at work or during athletic pursuits. That's a potentially life-changing piece of tech. I for one would like a glove that can turn me into Bionic Hand Man. Then again, I would also like a suit that can turn me into Bulletproof & Superpowered Man. I hope I don't have to wait as long for the Nuada as I do for the AdrenaSuit.

If the Nuada manifests in line with its vision, it will be a thin, flexible, ergonomic, and nonintrusive wearable. The glove is to have a network of built-in tendons to support the user's hand when needed. Gripping in particular will be much easier with Nuada assistance. Tendons will connect to a rechargeable base at the wrist, serving as both their power source and a tracker that collects metrics on pulling strength, stability while pulling, heart rate, etc. that wearers can review and share with their docs.

Thorns In - The Glove You Can't Take Off

With the Bellabooty Belt, you can "hip thrust anytime, anywhere!" And just like that, all your problems - maybe even all the world's problems - are solved!...

Tempo Move - Home Gym in a Side Table

Third Assist's vintage-style hockey gloves could eliminate fights in the sport. Because who's ever gonna wanna take these sweet throwback gloves off? I wouldn't. Even to punch some a-hole's teeth out...

Get a FORTIS exoskeleton and you'll instantly have: 1) superhero strength; and 2) a superhero costume. Two birds, one stone. Like Iron Man. Lockheed Martin is developing this unpowered, lightweight external structure...

Bat, a levitating wireless computer mouse, is currently in the research and testing phases for use in preventing and treating carpal tunnel syndrome, a median nerve dysfunction to which many mouse manipulators are susceptible...

SISU! is the Finnish word for stubborn determination, and an appropriate moniker for a 28-pound War Hammer that has a predominantly fitness-based application, but could also wallop the ever loving Fuck You out of the...

Merry Christmas, Chubs. Er, I mean, Happy Holidays, you svelte wall of muscle and poster child for athleticism. Here's a fabulous fitness gift to keep you that way...

As if riding a motorcycle while protecting your skin from flaying off and bones from splitting in half weren't cool enough, Knox is going to make it look like you have mech hands in the process. More armor than gloves...

Nothing communicates strength and confidence better than a firm handshake. Except, perhaps, a weak handshake administered by a hand wearing one of these stun gun gloves. Holy BZZZZZZT! Batman! I thought I'd seen my #1...