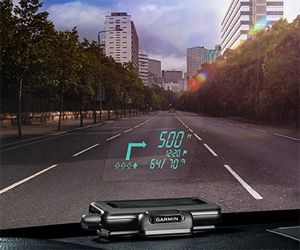 Keep my eyes on the road? Whaaat? I haven't done that since, like, 1996. For a while I would clip my nails and text while driving to pass the time, but after all of those creepy PSAs came out I could hardly even type out "What up dog?" to Cornelius without envisioning myself taking out some kid with a Batman backpack pretending to fly across the street. So then I got my head screwed on right and started watching my phone's GPS nav screen instead. I prop it up against the coin holder behind my gearshift, so it's close enough to my windshield that if I need to look up every now and then I'm already right there.

But now Garmin has this Head-Up Display for smartphone navigation systems. As in, head always up display--the device projects readouts and key information from the user's phone onto his or her windshield for easy, safer viewing while driving. With a transparent film or attached reflector lens applied to the glass, the Garmin HUD can beam turn-by-turn directions, distance to the next turn, current speed and speed limit, Kate Beckinsale's phone number, notices of potential traffic delays, and safety camera locations directly into the driver's line of sight, without blocking critical areas. The HUD also automatically adjusts its brightness level to ensure projections remain visible in direct sunlight or at night.

The HUD navigation package connects wirelessly to Bluetooth-enabled smartphones and functions in conjunction with Garmin's StreetPilot software for iPhone or NAVIGON mobile apps.

Welp, we know what The Better Ice Scraper thinks of itself. No insecurity issues there. I guess that makes it an even better gift for teens - they can gain confidence from it at the same time they gain confidence in using...

If you're not lucky enough to be selected by Skully to beta test their HUD motorcycle helmet, you might consider joining the line to own the NUVIZ take on motorcycle Head-Up Display. The NUVIZ Ride:HUD, a joint venture...

Who wants to beta test Skully's forthcoming heads up display motorcycle helmet? All you have to do is slide it on (or if you're me, shoe horn your melon head into it), launch its Synapse-integrated HUD system brimming...

GlassUp. They're a pair of HUD smartphone-linked glasses that flash texts, emails, news updates, directions, any messages for which you would normally look down and consult a screen, right onto the glass in front of your...

Is this a real problem? Or rather, is it such a big deal? People using your driveway as a turnaround. Cars getting lost or going one street too far and pulling into 20' of your pavement to correct their mistake. Since...

I know most of you have heard of a radar detector*. Possibly you've used one before. Maybe you've even tried the original Fuzzbuster. But whether or not you're aware of how life (and wallet and license points) saving...

Lost in the Woods: 15 Items to Help You Find Your Way

These 15 items that help you when you're lost will find north, map routes, illuminate dark spaces, and, when all else fails, SOS your stranded self some help. In other words, they will pretty much ensure you dudes and...

Mojipic is a voice-controlled emoji car display. Brothers Ilya and Igor Pashko designed the bumper sticker and decal alternative for drivers who don't just have something, but a lot of things, to say. You can change your...

I've wished I were a human bulldozer. A human airplane. A human beatbox. But a human compass? Never crossed my mind before North Sense...

Stuff to Keep in Your Car

Whether I'm in the car commuting or road tripping, driving or riding shotgun, there are certain items I like to have on hand on the off almost certain chance I get stuck in traffic...