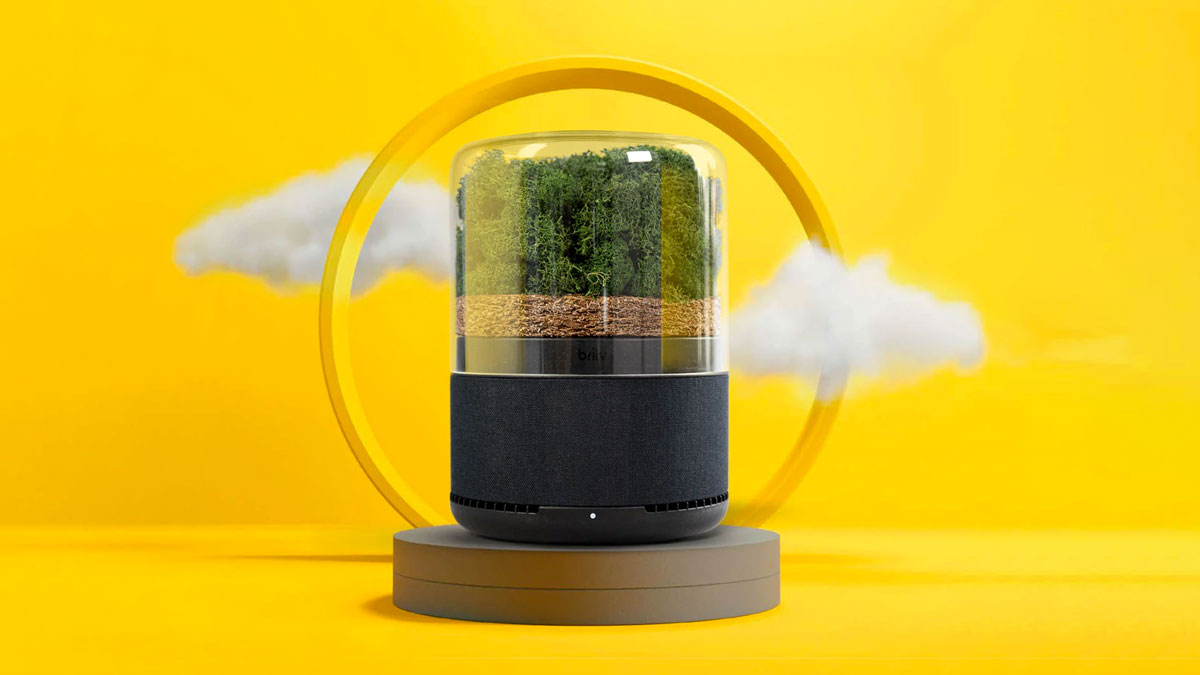 A breath of fresh air meets a sight for sore eyes in the briiv Air Filter, a sustainable home air purifier made from 90% natural, renewable materials.

The lush green of a pile of dried moss is probably the briiv's most eye-catching feature, followed by the discs of earthy brown coconut husk beneath it. Both bring some life to a room, while simultaneously supporting the life (i.e., you and your family) in it. The moss draws in and captures large airborne particulates, such as dust and animal dander, while the coconut husk filters - all replaceable and biodegradable - trap smaller harmful substances.

briiv furthers its air purification efforts with a combination silk matrix, a bespoke filter consisting of activated charcoal and nanofibers. The activated charcoal, as we've seen with the Boot Bananas, absorbs odors, including those produced by cooking, pets, and bungholes. The nanofibers, which briiv calls its "secret weapon," are filters designed for the medical industry to trap the air's finest particles. (By comparison, HEPA filters are made from larger microfibers.) briiv's nanofibers are also biodegradable.

Being largely plant-based, briiv does take the opportunity to compare its performance to the natural air purification properties of houseplants. It claims to be as powerful as 3,043 of them.

Like most gadgets these days, the briiv Air Filter has its own app, which you can use independently, or integrate into your smart home setup.

Drop a wad on the Aranet4 HOME wireless indoor air quality monitor to find out if you need to drop another wad on an Airmega smart air purifier. The Aranet4 HOME uses a non-dispersive infra-red sensor (NDIR) to measure...

Ao Air hopes their forthcoming Atmos face mask will be - oh yeah - a breath of fresh air amidst a market of otherwise constricting, uncomfortable, and butt ugly wearable air purifiers. In addition to "a more human experience"...

Black thumbs and black lungs, the Respira Smart Garden is here for you. A hybrid hydroponic plant wall and air purifier, the Respira merges plants' natural biofiltration process with smart technology to produce a healthy...

Clean up the bad air in your home at its source. OK, I guess you install this UV Light Air Purifier in your HVAC system, not your significant other's mouth, but throw in a bottle of activated charcoal mouthwash, and you...

pureAir SOLO is careful to be careful about the claims it makes as a personal space air purifier, but it does drop the "virus" buzzword of 2020 a couple times. The around-the-neck wearable uses a platinum permanent emitter...

Sure, the Dyson Pure Hot+Cool Link Air Purifier has the Dyson name going for it. The air de-polluter and fan also has both Warm Me and Blow Me settings, so you can use it all year 'round to help achieve an optimal level...

I don't know about clipping a FitAir air purifier to my arm like a fitness tracker or music player. It just looks a little...helicopter-mom-aggressive to me. But I would one hundred percent take the portable personal...

Looks like the Cookiray Anti-Odor Pendant Lamp went with Slimer Stew as the sample dish in its demo video. What the ghosts-from-hell else smokes neon green on the stovetop?...

If you're in the midst of an emergency or natural disaster, or if you're just going on a months-long hike or backwoods tour in your VW van, the DayOne has your clean drinking water concerns covered. A single one of these...

They say the best way to fight the coronavirus is to wash your hands. But what fun is that? Germ busting via hand-washing requires no fancy gadgets. No special sanitizers. No multi-filtered medical-grade purifiers revered...

Is this a prank? When I think of a Wasabi Air Shield, wasabi shielding me from air, I think of my eyes running like the Iguazu Falls. My nose about to blow off my face. The burn, the pain, the burn!...