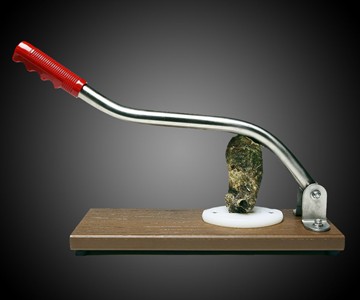 The Oyster-Jack No 7 will have you shuckin' errrsters as fast as boobies flash on Bourbon Street during Mardi Gras. This Arm of Champions is designed and priced especially for home use, but sacrifices none of the power and panache of Oyster-Jack's commercial-quality No 8 model. It can also shuck clams.

US-made, Oyster-Jack No 7 has a plastic composite base, stainless steel handle and fasteners, and my-abs-hard carbide-coated wedge. The wedge's V-shape is fashioned to penetrate oysters cleanly, and with a fraction of the grunt work (not to mention slices, stabs, and misfires) required when using a shucking knife.

Sidebar: I tried to use a knife to shuck an oyster once. What I determined is that shucking sucks (you can throw the F word in there too for extra emphasis and alliteration but I get angry emails every time I do it, so I'm refraining). But I'll go anywhere from some hoity-toity wine event with my girlfriend to a seafood shack in Mexico and see dudes in the kitchen who have oyster shucking as their one and only job. Hours on end, day after day, they shuck, shuck, shuck.

And then, last week my girlfriend made me watch this movie Burnt because it had dreamy Bradley Cooper in it. It was basically terrible, except some of the food looked good and there was a smokin' hot French girl in it for, like, 5 minutes. Anyway, while I realize this was a fictitious story not based on real events, Bradley Cooper played a chef who did the entire country of France wrong and then assigned himself the punishment of shucking 1 million oysters in New Orleans before he could return to Europe. ONE MILLION. By hand. I think it took him years.

I bet it would have taken him a month with an Oyster-Jack.

The Oyster-Jack No 7 seems likes a good fit for those who eat oysters often and by the bushel, or who just want to put on a show for their guests / family / hot date without working very hard and / or potentially impaling their hand and looking like a fool.

Dumplings are not on my list of DIY desires for the year - not when I have a papercraft Commodore 65 to build! But if anyone else out there (ahem, Mama) is interested in trying their hand at dumpling creation, this 2-in-1...

Simultaneously the most thoughtful and disgusting gift a girl could ever get. Each of these 50 freshwater oysters is guaranteed to have a real, 6mm to 7mm round akoya pearl inside. But here's the catch: uh, the pearls...

Don't be a broomstick in the mud, dudes, this Halloween Broomstick Snack & Appetizer Stand is a real clever and charming way to display spooky season treats. And even if you don't want one, it would make a fine gift for...

It bonks! Nicely. It cuts! Safely. It cleans! Efficiently. It sharpens! Er...sharply. And it floats. The Kombo Fish is a rugged, seafood-dinner-centric multi-tool that hopes to become an invaluable part of your tackle...

McCormick has launched an Old Bay Hot Sauce just in time for the Super Bowl, and my Spidey Spicy Sense tells me it's hot in more ways than one: at printing, when I tried to access the McCormick online store to purchase...

Munch or Dunk? The Best Chips for Snacking & Dipping

Answering the Munch or dunk? question, and scoping out the best chips for snacking and dipping is the only stake I have in this year's Super Bowl. I don't really care who wins the game as long as I win the party. And...

Well, The Rock restaurant proves Zanzibar has at least one thing going for it besides its say-a-licious name. Zanzibar, Zanzibar. Have a Zanzibari dinner in Zanzibar. I think I'll rename my girlfriend's cat Zanzibar...

From whence does this Raclette personal cheese melter come? For those unfamiliar, Raclette is both a big ol' hunk of Swiss cheese, and a Swiss method of melting layers of the cheese over a fire, and scraping them off...

Hidden Valley began pouring on the Ranch dressing in fountain form last March, but I think it's much better suited for Thanksgiving, and the holiday season as a whole. What better gift for your party guests than an 18"...

Use this cast iron shrimp grill and serving pan to cook shrimp on the barbie, and you'll have a much better chance of eating shrimp off the barbie. The sturdy slab has cutouts for up to 22 jumbo shrimp, which it says...

From oral hygiene to hors d'oeuvres serving, the Dark Lord of the Sith has your back. Exhibiting an unrelenting desire to serve and protect, Darth Vader has traded in his lightsaber for a toothpick. A wad of toothpicks...