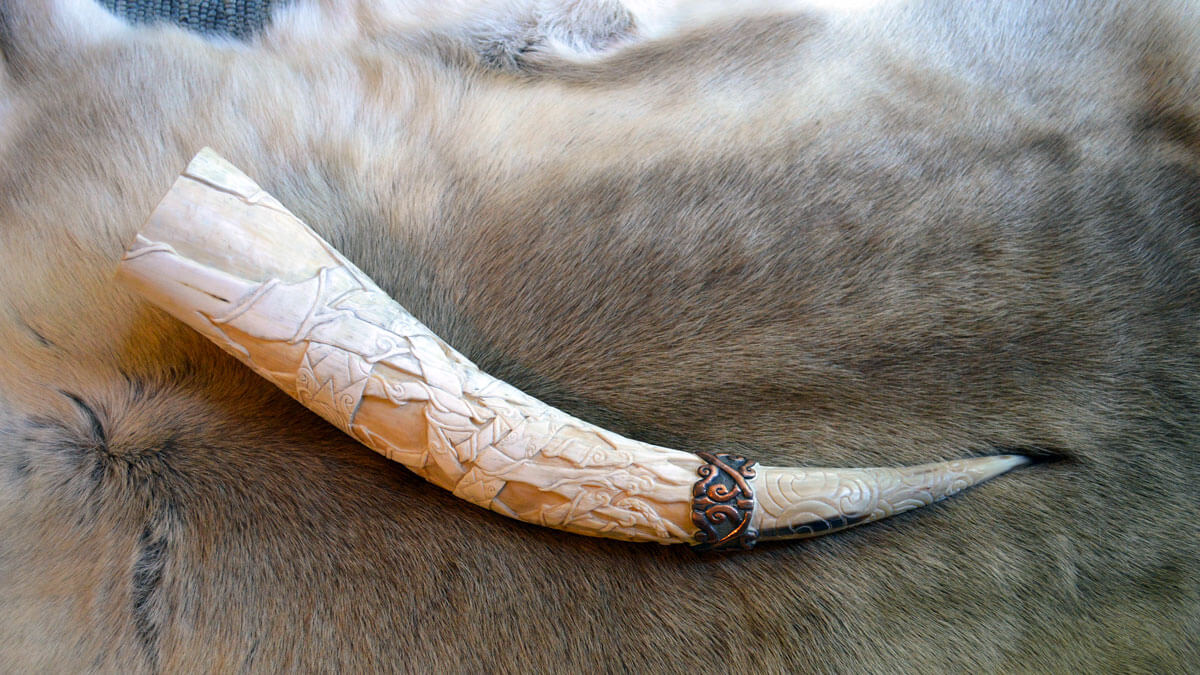 Marshall carves his pieces from real steer horns, scrubbing and cleaning them inside and out, shining them up for carving, and then alcohol-curing the finished products to make them safe to drink from.

Marshall's two most expensive horns, the Stag ($450) and the Roots of the Yggdrasil (pictured above, $3,000), are real beauts, elaborate, technical, and true pieces of art. The Stag design is made of a single horn whose embossed look Marshall achieved by removing horn layers around the spiraled pattern with a hammer and chisel to create its shape and effect.

And if that took a year off his life, the Roots of the Yggdrasil probably took another 5. Marshall's depiction of Niohoggr the Dragon (I'm not familiar, but Marshall says he lives in the roots of the World Tree, Yggdrasil) has the beast winding through the tree until both dragon and roots hit the Mimirsbrunnr, the well where Odin left his eye to gain the ability to see everything.

The band of Roots of the Yggdrasil is made copper. The horn is 28" long and holds around 46 ounces beer that better show craftsmanship as fine as the vessel holding it.

Would you beer my Valentine? With a Stanley Adventure Big Grip Beer Stein in hand, that's the question I'm most hoping to hear from my wife, She-Ra: Princess of Power this Valentine's Day...

Dometic MoBar. It's short for Domestic Mother's Bar, but they changed the name so dads and dudes will want to use it. No, that's not it. OK, they changed it so it wouldn't be so obvious how bad domestic mothers need a...

This Black Bag Porcelain Vase is black. Deep, dark matte black, almost the same shade as my ex-girlfriend Karen's heart. (Almost. Hers is even more similar to that Black 3.0, Blackest Paint in the World Black.) So in...

My doomsday prediction for 2023: the Octopus Bananas will come for us! And since we'll all be dead or enslaved, and unable to get merch and gear to remember it by, here's an Octopus Banana Rug you can buy before the Octo-Banana-pocalypse...

When you're buying a gift, they say it's the thought that counts, but depending on your gift recipient, it's not the thought at all. It's the gift that counts. Its aesthetic. How cool it is. How much its owner wants to...

Jason Barton made a king bed with enough room for the King of the Bed. Which means you'll be sleeping on a cut piece of memory foam stuck in the 23" insert tacked onto its side...

Vadim, woodworker and maker of this Wooden Alien Skull Phone Stand, calls his handmade creation "charming." Ha! Not the "-ing" descriptor I would have gone with over "chilling," "disturbing," or possibly for die-hard...