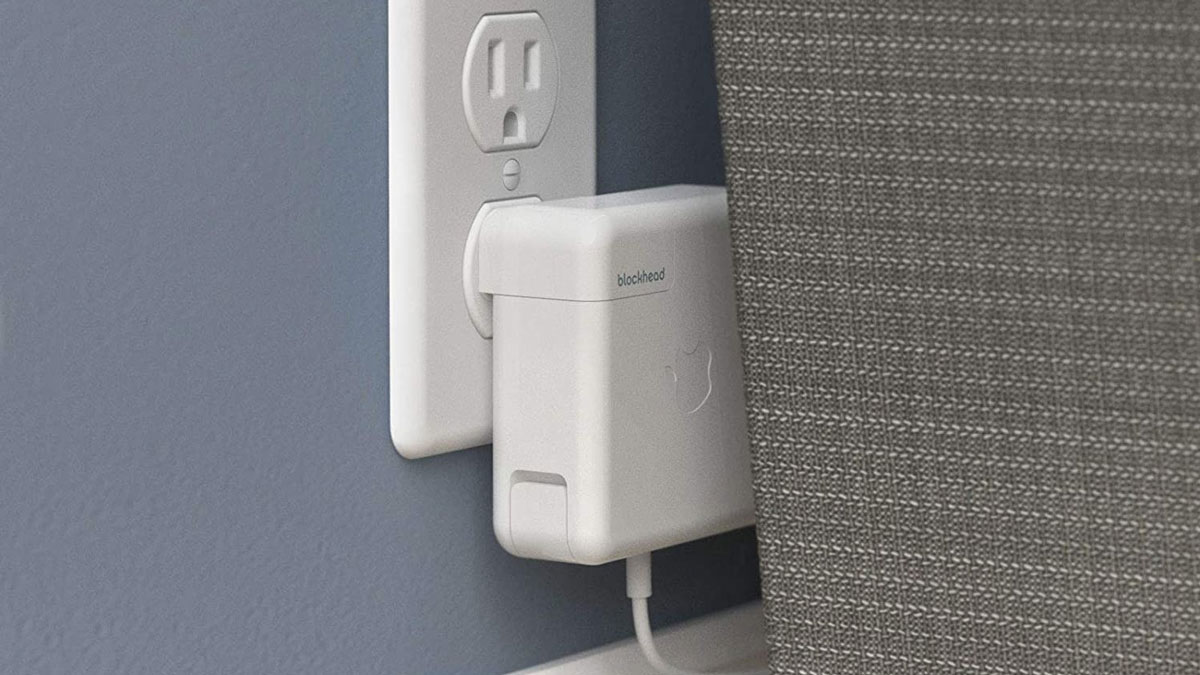 They named it "Blockhead," which is cute & clever because this little module is a literal block that subs in for the existing pronged head of your Apple power adapter. But what the Blockhead accomplishes is definitely no blockhead move: it modifies the adapter such that you can plug it in sideways, with the largest part of its surface pressed against the wall instead of protruding from it. This Blockhead is borderline genius!

Snap it onto your existing MacBook or iPad power adapter, and the Blockhead side plug will provide increased access for the giant Apple monstrosity to outlets in your house that are in tight spaces behind furniture or equipment, or high-traffic areas where they're likely to get bumped and knocked because they stick out, like, 8 feet from the wall.

And for me, being able to turn my circa 2012 charger sideways for plug-in means the weight of it and the degradation of its prongs (they move separately now instead of as one) might prevent the charger from sagging and kind of partially hanging out of the socket such that every once in a while I hear a bzzz, snap! sound of escaping electricity.

Somethin's brewin' up in here, and for once, it's not a fight. Not a beer, pot of coffee, or cup of tea for your mama this time either. With the Craft A Brew Hard Cider Kit, what's brewin' is...well...yeah. Hard cider...

Get ready to radioactivate your iPhone. British iPhone "enabler" iPatch is set to release a glow modification for the rear apple on iPhone 4S models within the month. That means incoming calls, texts, alarms, and other...

Need a gift for a teen...in 1983? This retro Blu-ray / DVD Drive slipped inside an Apple Disk II case is a piece of art, a piece of history, a piece of nostalgia, and a sweet way to watch the Alien Anthology in HD al

As digitial artist and iPoo creator, Milos Paripovic, so eloquently puts it: If you look at a toilet and see the Apple logo, that's commentary on your psyche, not his design. This silver spectacle was lovingly contoured...

Creaton Crafts craftmaster Lara opens her description of the magnificent Marvel comics paper vase above, and many of her other elaborate book art creations, with "I love folding and cutting paper!" And, wow. I know I...

Ergonomic nightmare of a round mouse included! The iBot G3 is a sweet little desktop toy and tribute to Apple's iMac G3 from Classsicbot, a brand devoted to "classic computer designs and geek culture." It arrives on the...

ohBoy, they just dropped the iBoy! In this case, "they" is Classicbot, and their iPod tribute in collectible figure form is the latest in the design shop's retro Apple toy line to charm us with its adorable face and transformable...

Sophisticated. Elegant. Open Source. The iNecklace is a gorgeously machined aluminum pendant with a subtle pulsating LED. Perfect for the playa or with Prada. Made for women who celebrate art, science, engineering and...

Let your fish swim free of viruses. It's a no-brainer aquarium setup that even novice fish owners can learn to operate. And, of course, it's very stylish and a bit overpriced. But what else would you expect from Apple?...