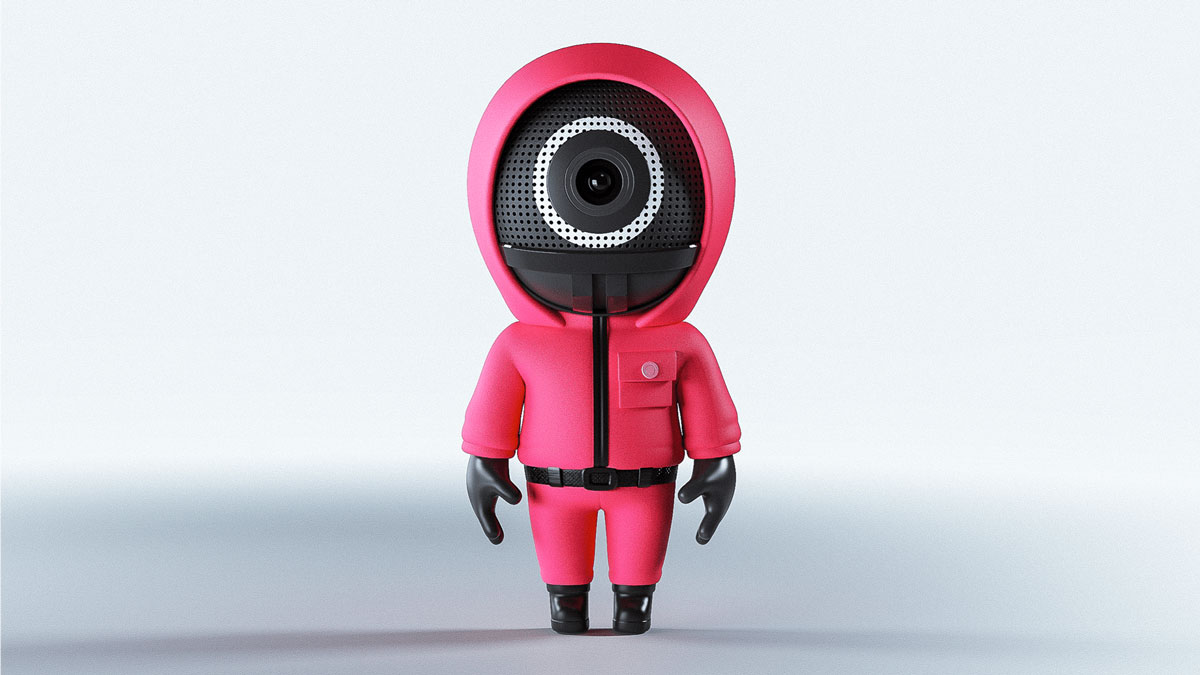 While I'm a fan of Netflix's Squid Game series, and fully support the viral craze the twisted kiddie game drama has stirred up, I'm not sure I'd want a Squid Game worker serving as my home security camera. I mean, would the staffer in the pink jumpsuit and the shapely mask really do surveillance for me, or end up doing surveillance of me?

The Squid Game Home Security Camera is a concept developed by Cheon Ryong Choi, Soonook Kwon, and Jaeyeon Nam, and it's a doozie. The show's anonymous workers, with their bright attire and rounded hardshell black masks, physically lend themselves real dang well to the formation of whimsical, humanoid security cameras*. That doing so creates such rich irony - are you doing the watching or being watched? - makes the concept even more poignant...and creepy.

Unless you fancy yourself the Front Man, and have no question the faceless suits are working for you.

Choi, Kwon, and Nam created their Squid Game Home Security Camera with a privacy visor that retracts to reveal a lens "eye." The eye responds to sound and motion, rotating to provide a 180-degree view of its surroundings. Shiver. I think I'll stick to paying my respects to the series with a simple Squid Game Halloween costume.

*Their speaker grille cases make it easy to imagine turning your Alexa or other virtual assistant into a Squid Game-themed AI too.

Red light, green light, wake up! Or prepare for the Squid Game Doll Shooting Alarm Clock to eliminate you. ... OK, she'll just pelt you with a foam bullet, but still. This piece of Squid Game merch might be the creepiest...

Despite the bleak, dystopian vibe emanating from Squid Game's actual story and content, the costumes you can build from these Squid Game masks and either head-to-toe black, or a pink jumpsuit, make Netflix's Korean survival</a

Blink and you might miss it, but your Blink Floodlight and Outdoor system, a wire-free security camera and pair of 700-lumen motion-triggered LED lights, will see, and record, it all for you...

Panasonic is expanding its HomeHawk home security system series this summer with the HomeHawk Window, a monitoring camera that installs in, uh, your home window. You know, facing out...

The Soliom Bird S60 is a solar-powered outdoor home security camera. That is, it's completely wireless and self-sustained by a built-in 4000mAh battery that charges with at least 1 hour of direct sunlight per day. (There's...

Phoenix Home Shield supports your quest to protect yourself from home intruders, carjackers, and grizzly bears. A pepper gel rather than a pepper spray, Phoenix Home Shield is designed to send a long-range stream of stay-the-F-away...

A deadbolt alternative for your doors, the HAVEN Connect smart lock mounts to the floor just inside the threshold to provide a doorstop-style fortification at the door's strongest point - its base. According to HAVEN...

It's a screw cam! No, not that kind...well. What you use it for is up to you, I guess. But I'm calling it a screw cam because this miniature CCTV camera looks like the piece of hardware--a simple screw just minding its...

Not a whole lot of good can come of any everyday item fitted with a hidden camera, but a hidden camera in a water bottle? Gee, I wonder where people are going to set that up. Probably not in the side pocket of their backpack...

Privacy crusader Adam Harvey builds off of his last experiment with fashion as a means of confidentiality, CV Dazzle, with a new line of counter surveillance clothing termed Stealth Wear. While the CV Dazzle system focused...

You may not always be talking to her, but Alexa is always listening. Even when she swears she's not, which is, like, Play #1 in the Eavesdropper's Handbook. Alexagate is here to cover her ears, put the counter surveillance...