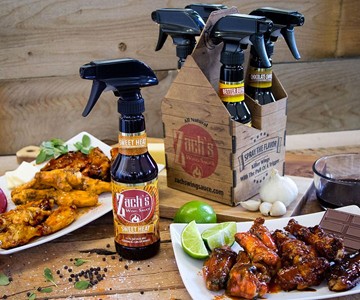 Zach says he crafts his wing sauces with the same attention and precision brewmasters put into crafting their beers. To put a cherry on the point, he uses beer bottles as the vehicle for his mists of flavor. He came up with the spray method as a way to save time, effort, and, most importantly, the sauce itself during wing preparation. Cleanup is reduced too when you don't have to mop through a pool of goo in a bowl to coat your wings, and every square inch of your grill grate, while cooking.

Zach's Wing Sauce will appeal to the health conscious out there who prefer grilling their wings to deep frying. In addition to eliminating the vat of oil, grilled wings with sprayable sauce will contain no fillers, preservatives, or artificial ingredients. In his Sweet Heat, Sriracha Lime, Better Buffalo, Chocolate Chipotle, and Mesquite Heat flavors, Zach includes only recognizable ingredients, and each sauce is vegetarian and dairy- and gluten-free.

*One of the restaurants did share that they put their wings in a sous-vide machine before grilling them.

Turn your bottles of BBQ sauce, salad dressing, and marinades into sex toys for your meat! I mean, there's really no better way to describe the Bottletop Baster. It's a head of tickly silicone bristles that fits onto...

14 Condiments & Toppings You May Just Eat On Their Own

These 14 condiments and toppings will make you want to grab a steak. Or a cupcake. Some chicken. Some waffles. Some chicken & waffles. Ice cream, tacos, burgers, fries...what, your belly don't have room for all that?...

This Cuisinart issue might seem too bastic to merit an entire feature, but: 1) grilling season isn't over yet, and there's lots of good meat left to BBQ and slather with sauce in the backyard; 2) tailgating season is...

If there's one thing that Jews know, it's not barbecue sauce. Nonetheless, we've been given their best effort. Hey, at least it's kosher right? No word on whether or not the sauce bottle "tips" well for easy pouring...

This ain't no Sweet Baby Ray's, Applebee's sauce is the gloss. Applebee's wing sauce and Winky Lux Lip Gloss, to be precise, in this kooky, yet somehow charming, brand mashup in honor of National Chicken Wing Day and...

The gobble, gobble of the holiday season is in full swing! But if you would, take a quick pause from stuffing your own piehole to consider how you might win this year's gift exchange by stuffing the pieholes of others...

Not quite as good as tumbling your meat into diamonds, but way better than waiting 12 hours for it to marinate. The Chef's Elite 15-Minute Marinator uses a vacuum system and a (literal) drum roll to (literally) turn your...

Slice of Sauce is ketchup meets Kraft Singles meets Fruit Roll-Ups meets your burger. Your new and improved mess-free burger, since this dried tomato condiment trades in the globs of red goo for a solid, slim, slick...Slice...of...

Open your mind - and numb your mouth - to the hot umami bomb that is Fly By Jing Sichuan Chili Crisp. Made in Chengdu by Sichuan chef Jing Gao, this condiment is an oil-based cornucopia of flavor and texture they say...

This ain't no Pooh Bear honey. Fortified with freshly chopped habanero peppers, the meaty smoke of a hot grill, and a subtle dose of bee nectar, Honey Badger BBQ Sauce will grab you by the nuts, make you lick the sun...

Is the Saucemoto, a dip clip that latches onto the air vent in your car, a solution to or perpetuation of a problem? Do we really want people who have just gotten a 20-piece order of McNuggets and large fries dipping...