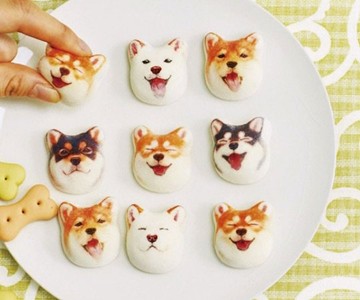 $31
from Japan Trend Shop »
Check It Out

If the sight of a Shiba Inu makes you just want to squishitsface, well, how about sparing the dog's dignity and ability to breathe, and taking out your cuteness aggression on a set of Shiba Inu Dog Marshmallows? Come on, you have to admit, they're just as adorable as the real thing.

And the marshmallow versions are filled with chocolate and sweet azuki bean flavors!

Made in Japan, in honor of one of its native dog breeds, the Shiba Inu Marshmallows come in dog packs of 9. Hopefully that's enough marshmallow puppers to give as a gift to your girlfriend in place of the single live one you're not ready to take on (or pay 2 grand for) yet.

All of the Shiba Inus in the marshmallow set have different colorations and expressions, though, true to the breed, they all look like they just sucked down some nitrous oxide.

I must have stumbled upon the end of a rainbow because Jack. Pot. My days of spending 15 minutes crouched over my cereal bowl picking out all the boring healthy* brown bits from Lucky Charms are about to be as over as...

Mr. Stay Puft's got nothing on my Mallow Bow. Sure, he can stomp on people, toss cars, and tear down buildings, but I can dole out cavities, high blood sugar, and toothaches. Straight to the kisser from 60' away!...

The little bit of good news I have for you today is that we are only 16 days away from spring and 27 days away from Easter*, which means Peep eating season is upon us! Even better tidings for Minecraft die-hards: Marshmallow...

At first I thought Chef'n's Tabletop S'mores Maker was a marshmallow that had already been roasted, a square of chocolate that had been melted before. I myself have written about at least 2 indoor-safe, tabletop s'mores...

Hot diggity...boobies! Wieners too! Meet the Hot Dog Man and the Marshmallow Woman, a campfire cooking stick power couple whose powers include: roasting hot dogs; toasting marshmallows; and giving everyone they meet their...

Know what a Star Wars The Mandalorian Holiday Milk Chocolate Ball filled with surprise The Child marshmallow treat means? It's time for Baby Yoda to learn what it feels like to be the frog. I can already hear a holiday...

Forget S'mores, in filling jumbo marshmallows with milk chocolate, Stuffed Puffs just brought my favorite childhood competition of seeing how many marshmallows I can stuff in my mouth without needing the Heimlich back...

Bob Ross The Joy Of Cereal

Now here are some happy little trees that are going to give me a happy little belly, 'cause the carefree plant life in this box of Bob Ross The Joy Of Cereal isn't made of oil paint, it's made of marshmallow! Mmmm, I'm...

Roasting marshmallows and making s'mores over an open flame is such grand fun. At least until someone falls into the burning ring of fire and doesn't live to sing about it like Johnny Cash. Then it's kind of a downer...

2014 marks the 30th anniversary of the original Ghostbusters' big screen release. Yeah, I know. I can't believe you're that old either. So obviously enterprising capitalists are making to capitalize on the Who ya gonna...