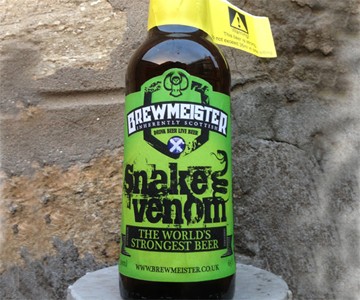 At this time last year, the World's Strongest Beer was Armageddon, a 330 mL bottle of malt, hops, a little sweetness, and an awesome 65% ABV crafted by Scottish brewery Brewmeister. This year, the World's New Strongest Beer is Snake Venom, a 275 mL bottle of peat smoked malt, acid malt, chocolate malt, and a slightly even more staggering 67.5% ABV. Crafted by...Scottish brewery Brewmeister. Apparently, no one can top their instant liver damagers with beers even approaching potable, so they set about to--and succeeded in--trumping themselves.

Snake Venom is fermented with 2 different types of yeast, ale and champagne, and then freeze concentrated to secure its astounding 67.5% content makeup. 67.5% That's over 2/3 my beer filled with pure alcohol. Drink just one bottle of Snake Venom and it will feel like you've downed a 12-pack of any big-hitting American domestic. Sounds scary. Scary yet...efficient.

Brewmeister notes that, "Unlike Armageddon, Snake Venom is not designed to mask the taste of the alcohol." So, uh, it tastes like what my mama used to pour on my skinned knees, plus into my mouth if I said the F word? Nay, say the Scots. While the alcohol flavor is strong, Snake Venom still tastes like beer--"hoppy, malty and very pleasant." Yeah...maybe. But how numbed/drunk do I have to be before I down the first one? Because really, after enough F bombs, even rubbing alcohol has its toothsome qualities.

Snake Venom ships internationally (outside the UK) for about $22.50 per bottle. Yikes. Also, it can take up to 30 days for delivery outside of Europe, though typically more like 10 to 12 days.

Dometic MoBar. It's short for Domestic Mother's Bar, but they changed the name so dads and dudes will want to use it. No, that's not it. OK, they changed it so it wouldn't be so obvious how bad domestic mothers need a...

Are normal home brewing kits typically boring and ugly? I don't really know, as I focus more on drinking beer than making beer (best to funnel all of your energy into a single channel and dominate it!) but whatever normal...

Green Life Technologies calls its Chug N' Plug a "revolutionary tool" for shotgunning your beer. And earlier today I read about how a bottom-dispensing gas can was "revolutionary" from the makers of SureCan. So. Chugging...

I don't always watch hockey, but when I do...I prefer to do it drunk of my ass so I find it more entertaining. This beer mug incarnation of the Stanley Cup looks like a great way to achieve drunk off my ass with a quickness...