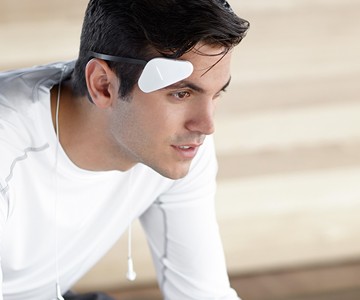 When asked to describe their startup, Thync, in 3 words founders Isy Goldwasser and Dr. Jamie Tyler go with "How good feels." That's a relief. Because when I look at the sliver of wearable tech stamped on that dude's temple and read that it's injecting him with neurosignaling waveforms, the 3 words that come to my mind are: "Chicken fried brains." So it's good that Thync is quick to explain how these neurosignals it administers are intended not to cook away my consciousness, but to energize or calm it. Thync endeavors to give wearers the power to change the way they feel.

Calm, centered, and relaxed. Energized, motivated, and ready to conquer the world. They might be the most sought-after states of mind, and the most difficult to generate on our own if external factors or a general feeling of anxiety/lethargy have taken over. Thync's waveform tech, called Vibes, is designed to induce states of Calm or Energy on demand. When successful they can help take the edge off, reduce stress, improve sleep, stir up motivation, boost workouts, and jump start your day.

Thync users place the module angled just over their right temple and affix it with a disposable adhesive Energy Strip. To get the Vibes going, a Thync app syncs with the module, and leads users through their choice of a Calm or Energy session. According to Thync, Vibes feel either relaxing like a massage (Calm) or invigorating like a splash of cold water on your face (Energy). Sessions can achieve desired effects in as little as 5 minutes. The company says Calm seekers "feel physically relaxed, more centered, detached from stressful thoughts, and in some cases, a mild euphoria. Energy Vibe users feel mental alertness, focused, a burst of physical energy, excited, and motivated."

Thync, released in June 2015, probably has a few months to prove itself legit or complete cranial quackery. At printing it had 13 Amazon reviews, most of them glowing, and most of them glowing with the light of having been written by friends and family, or possibly company employees themselves. TechCrunch did have some (presumably unbiased) nice things to say though. So if you dig being a guinea pig, or are so tightly wound/lazy that your moods are ruining your life, shelling out for a Thync before its official results are in might still be worth it.

The blades in this collection of covert wearable knives aren't so much Bond gadgets or reliable self-defense tools as they are lifesavers in the arenas of cable- and cord-cutting, paper-slicing, and balloon-popping...

Welp, at least with the wearable Chairless Chair you'll never have to worry about someone stealing your seat. Or forgetting to save you one. Or expecting you to stand for the entirety of their lecture about your inability...

20 Gifts for Every Mood

Life: it's a whole mood. Which is to say it's a mashup of all the moods. Here, I've picked out 20 of them, and paired them with a gift, a product that either exemplifies the mood and the feelings that come with it, or...

If you're on the hunt to brighten someone's day, these 15 little gifts should present you with plenty of opportunities. Whether it's a spouse stressed from work, a buddy down on dating, a mama about to have a Mother's...

Want to pimp out your feet Google-style*? To avoid unpleasant collisions with other pedestrians, telephone poles, and public fountains that just came up out of frikkin' nowhere? To slap on your sneakers and never look...

British Condoms' i.Con isn't the first sexual fitness tracker to make the rounds in the UK--back in 2014 Bondara teased, but then never released the SexFit. At printing, i.Con was doing the same. Teasing your eager overachiever...

The Dictionary of Obscure Sorrows

The Dictionary of Obscure Sorrows could also be called John Koenig's Dictionary of Words He Made Up Himself to Describe Very Specific Feelings. But that title doesn't sound as nice, and probably wouldn't make most people...

Be the Spider-Man of sanitizing with a PumPiX wristband. The germ-busting wearable holds up to 0.4 ounces of your preferred hand sanitizer or surface disinfectant so you can spray webs of anti-bacterial, anti-viral mists...

If you weren't crowned winner of our Pet Jellyfish Tank Giveaway, or are like me and don't have much success keeping alive things in your care alive, this LED jellyfish mood lamp could be the non-living companion of your...

Too stoic to wear your heart on your sleeve? Then wear your frontal lobe on your Bieber side-swept bangs! The "brainchild" of a self-proclaimed starving medical student, this clever, kitschy knitting pattern will earn...