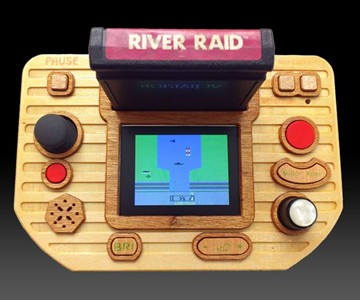 Some guy with perhaps a slightly warped idea of what people are willing to pay for a 1980s video game console has covered a portable Atari 2600 VCS in CNC-machined, yacht-varnished wood and artistic embellishments. Looks kinda neat, and the handiwork appears to be flawless. Working Nintendo controller coffee table levels of flawless, though I'd still rather have the latter because my fat fingers prefer the enlargement over the reduction of items' standard size.

The wood-encased portable player reads all NTSC Atari 2600 games, and includes the unit's charger. In addition to right and left joystick knobs, the console has:

The Best 80s Toys You Can Still Buy

If you're reading about the best 80s toys you can still buy, you're probably indulging in nostalgia, and thinking things were way better in the 80s than they are in the 2010s. I don't disagree, but I will say one thing...

This DIY Retro Computer Papercraft Models from Rocky Bergen are fan-frickin'-tastic! And, available as printable downloads, they're also all fan-frickin'-free! A papercraft Commodore 65. A cardboard model of an IBM 5150...

While the Nokia 6310 has always been a brick phone rather than a flip phone - and you know how I love me some flip phones - Nokia's 2021 upgraded rerelease of this mobile classic still sends my heart aflutter. Dudes...

Assembling the 2,532 bricks of this LEGO Atari 2600 building set is going to take, like, 17 hours. AKA the record number I logged for a single day of playing Asteroids when I was 12...

Next time your kid - or anyone you know under the age of 30 - wishes for a new phone, whip them up a Rotary Cellphone, and be like, "Wish granted!" Then sit back with some Boom Chicka Pop and watch them try to figure...

All of the coolness, none of the coolant. This Retro Coca-Cola Vending Machine Storage Cabinet provides nostalgics with the best of both worlds, bringing the classic aesthetic of Coke brand vending machines of the 50s...

What NFTime is it? It's Bulova Computron D-Cave Watch time. Physical meets Metaverse in watchmaker Bulova's retro-futuristic collaboration with digital cultural space D-Cave, resulting in a timepiece that pays tribute...

While this 1980s Slang Chart poster gives me a happy jolt of nostalgia on a gray and sluggish morning, it also makes me feel elderly and moderately embarrassed. Not only do I know every single word the chart points out...