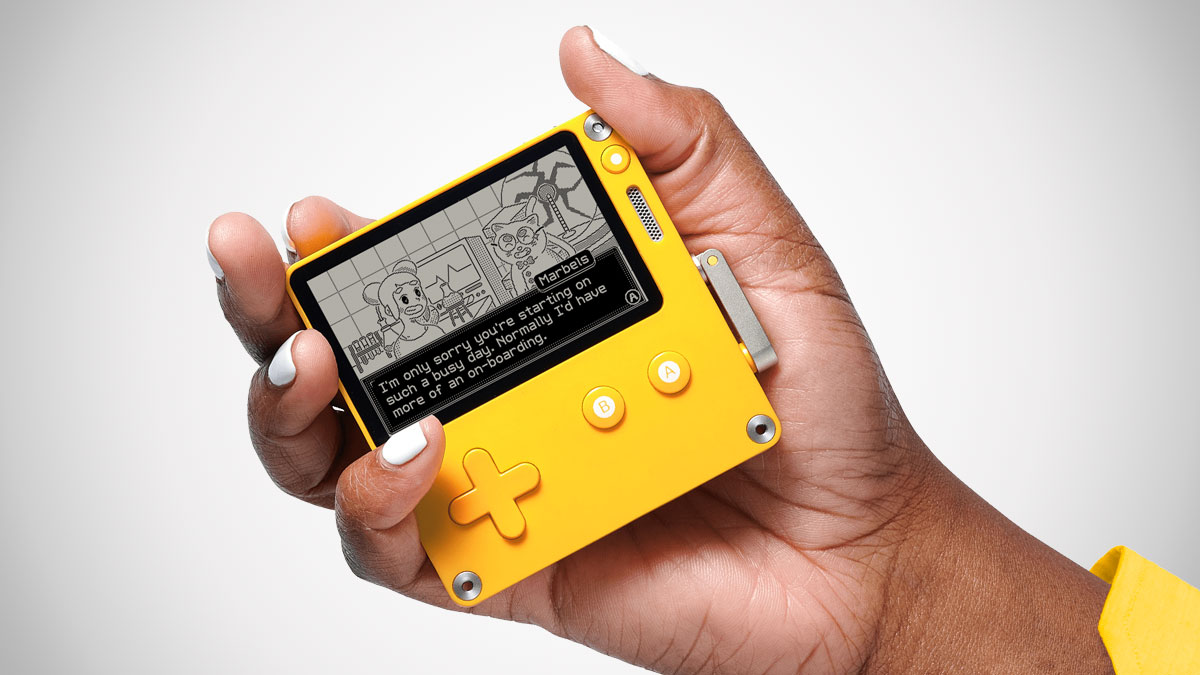 What's old is new again. The Playdate handheld game system will officially debut this year, with preorders beginning on July 29, 2021. Unlike Nintendo's own Switch (itself coming out with some shiny new upgrades) the Playdate seems all about paying tribute to the OG Game Boy. Its case, albeit blinding yellow rather than chill gray tones, incorporates the familiar A + B buttons and d-pad, and living inside the Playdate's wee screen? A 400 x 240 1-bit display in full, glorious...black-and-whiteness. With no backlighting.

According to Playdate maker Panic, this latter, uh, curiosity, "looks way more amazing than you're probably imagining," and the screen is "super reflective" to facilitate play in both dark settings and bright sunlight.

At 76 x 74 x 9 mm (about 3" x 2.9" x 0.4") Playdate is easily pocket-sized for gaming on the go. And it does incorporate some modern-day features into its retro shell, such as a 180 MHz Cortex M7 CPU, Wi-Fi connectivity, Bluetooth, and a loudspeaker. When the Playdate isn't in use it becomes a low-power clock. Oh, and it has a hand crank on the side.

Panic says the crank isn't a gimmick, but an analog controller that gives you more precision in playing some of the Playdate's growing library of games. Those who purchase a Playdate will automatically receive 2 new games every week for 12 weeks. Panic will also make their SDK free to download for gamers who are also makers.

And you can actually play games on the TinyCircuits Thumby miniature game console! I mean, presuming you remembered your glasses and have hands the size of a toddler's. Or perhaps a certain ex-president's...

"There is no better way to explore all of handheld gaming history than with Pocket." Granted, those are Analogue's words, not mine. And Analogue is the maker of Pocket, a handheld multi video game system with a tribute-to-Game-Boy...

Neon and mesh clothing are back in style, why not the Game Boy wrist watch? Though while Forever 21 has an entire 787 hangar full of hot pink, highlighter yellow, and retina-blasting green fishnets and half shirts, this...

Time to go through your closet and dig out all of those classic super nintendo games. You knew there was a reason not to give those to charity. Told you mom! The Supaboy Pocket SNES is essentially a gameboy for your old...

Cap off your work day - or your gaming night - with a fly Nintendo Game Boy Keycap from ZMKC. These miniature versions of the console miniatures turn the handheld into a fingerheld, but still manage to include the distinguished...

This is pretty badass and very well made. The iPWN! Case for iPhone 4 fits AT&T models perfectly and you'll surely be the only person you know that has one... unless you know a bunch of other geeks...

It might look familiar but the GameShell is a portable game console with characteristics unlike any other. The open source portable gaming system is a modular console embedded with a GNU/LINUX OS. Programmers can use...

Are you going to fire up the NES or ignite the Game Boy tonight? These Nintendo-themed lighters have all your old school flame-flicking needs covered. I wonder if they also come with a means of converting flame to fireball...

On the surface, putting a diaper on your luggage doesn't sound that 90s retro badass, but when the diaper looks like a Nintendo Game Boy? That's a luggage diaper - OK, luggage cover - I can see sort of see sliding over...