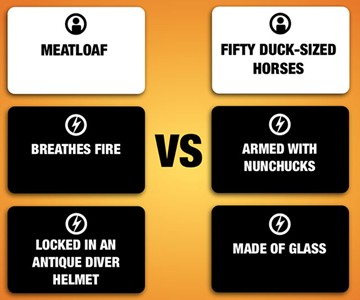 Superfight! instructs us to imagine Cards Against Humanity meets Apples to Apples. For the sake of what comes next, I would add to imagine this meeting takes place in either a dark alley, an octagon, or on opposite ends of a Wal-Mart aisle containing the last Big Hugs Elmo on Black Friday. Because after they meet, they're going to fight to the death. Superfight! is a card game of heroes and antagonists, battles and superpowers, first world problems, hairy situations, and major fucking predicaments.

The Superfight! core deck comes with 500 cards, separated into 2 decks: characters on white cards and powers/problems on black cards. Sample characters include:

And some of their potential gifts and conundrums:

In basic gameplay, one player serves as the Superfight! Ref for each round, and places an opponent from the character cards, plus two powers/problems from the black deck on the table. The rest of the players, who have randomly drawn hands of cards, choose a white and a black card--fighter and power--from their collection to face off against the opponent. Then the Ref calls out a direction, right or left, and each player has the opportunity to play a second, hopefully debilitating, black card against the player to that side of them.

For example, let's say the Ref's challenger is the cast of Full House, with super speed, and armed with dynamite. I would put them up against my zombie horde that is blessed to be 30 stories tall. Ha! No running from quantity and mass, I don't care how quick you are, Uncle Jesse! And my guys are already dead, so if you're starting to think that dynamite isn't going to do much, Michelle, you got it, dude! But...just as I'm starting to feel like I've got this thing locked...the asshole sitting next to me cripples my zombies with her "Can only see 3 seconds ago" card. Now I'll only be able to spot Uncle Jesse after he's long gone! I'll be swinging at and stomping on air! THANKS A LOT, MAMA!

After all players have dealt their counterattacks, the Ref chooses the character s/he thinks would win the Superfight, and the player who threw down those cards both earns a point, and becomes the next Ref.

In addition to its core pack, Superfight! also has 6 expansion packs called Blue, Green, Purple, Red, Orange, and Hero Machine. The only that really matters though is Red, which adds 100 cards filled with vulgarity and profanity so that the game becomes both boisterous and offensive.

The Snody Crisis Card is punched and jagged for a strong grip and maximal impact when you need to defend yourself. And it's finished in a rich anodized blue with gold edge accents for a slick look and flash of intimidation...