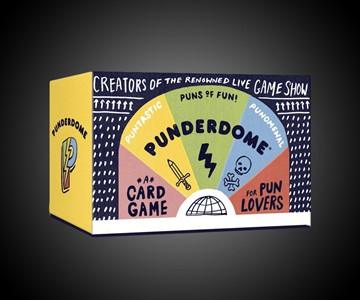 All puns, all night long at your next bro night? No, dudes, I'm not playing games with your heart. I'm playing games with this deck of Punderdome cards. Interested, ye linguistic manipulators? Ye nimble thinkers? Ye word nerds? Then grab a set for yourself, and prepare to take your wit and punning to a whole new level with this Game of Groans.

Punderdome creators describe their foray into tweaked and twisted language as "one part game, one part conversation starter," and believe it will Blaster the competition off the dining room table during a head-to-head dinner party battle at Aunty's thanks to its expanding of the arena for individual thought and creativity. That is, you don't have to be holding the words "FUPA" or "Catastrophic urethral trauma" in your hand to play them.

Two hundred double-sided Punderdome cards each contain prompts that players must combine into a single bad joke. At the beginning of each round, a rotating dealer turns over 2 cards, one white and one green, revealing two subjects. The rest of the players have 90 seconds to incorporate the two subjects into their very best (and by very best, they mean very worst) pun. Like Cards Against Humanity, each player submits his / her ugly brainchild anonymously, and the dealer picks the round's winner.

Unlike Cards Against Humanity, Punderdome play doesn't restrict players to what's written on the cards. The cards are only the launch point. It's your own skill and creativity that determines how you land...and how far you sink from there.

Which could also be Punderdome's biggest drawback. It requires a lot more intellectual ticking than staring at a hand of cards and figuring out which one will Mad Libs your prompt into the dirtiest joke. You can't throw it down in the Punderdome until you think it up and write it out.

Some sample Punderdome white card prompts include: Michael Jackson; Furniture; New York City; and Presidents. They match up with green cards such as: Sewing; Fishing; Exercising; and Cooking.

First published in 1981, the radically strange and unparalleled Codex Seraphinianus took Italian architect, illustrator, and industrial designer Luigi Serafini 2-1/2 years to complete. What is it? Aside from floating...

When I meet an attractive and well-endowed Portuguese exchange student, I feel that talk is overrated. Body language suits me juuust fine. However, when I'm lost on the streets of Istanbul and the only person willing...

Designers Prof. Doh Han Young, Jeong Koo Hee, and Kim Min Hong recently won a Red Dot Award for their Grass Printer. As you might have guessed, the Grass Printer is a device that prints stuff in grass*. It literally mows...