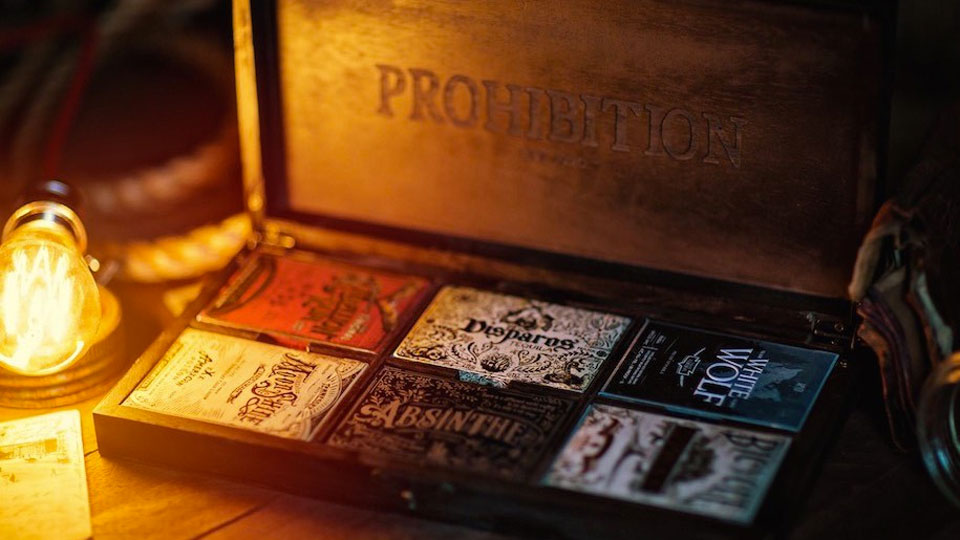 Gambling. Drinking. Breaking the law. Three favorite vices rolled into one boxed cocktail. With a lemon twist of magic. Ellusionist has put together 6 American classics from one of our most scandalous eras in history. The Prohibition Playing Cards collection features the best drinks the speakeasys once brought to the table, along with the inspired designs, clever artwork, and quality materials Ellusionist always does.

Just 3,000 of the Limited Edition Prohibition Box Sets have been dyed and cut, and only 5,000 of each First Edition card deck printed. Inside the hinged wooden vessel housing this assortment, suits aficionados will find:

Absinthe. The Green Fairy of spirits, the poster child of bohemian life, the key to forgetting your worries. Sometimes for days. While flat on you ass. Prohibition's Absinthe cards have the same emerald, hallucinogenic shine as the liquor, with additional flourishes such as the Ace of Spades' modeling after the filigree of the absinthe spoon. The deck is heavily embossed and, according to Ellusionist, "even the box appears to have had a few drinks.

Disparos. Spanish for shots. The kind you take with pleasure, not pain. Real men disparos their tequila, and real magicians Disparos their decks. This set has block printing and a false-edge border to give them a rustic feel. Cards are embossed with sugar skulls and dueling pistols.

Rebellion Rum. Yarrrr! Talk Like a Pirate Day may not be until September 19, but feel free to play like a pirate any day of the year. Rebellion Rum Prohibition-style means hibiscus flowers on the back and a nautical theme on the front. The deck's inside tuck is also printed with a maritime map, and the Ace of Spades gets metamorphosed into a parrot. Once again: Yarrrr!

Moonshine. Moonshine, my dear friend, my personal White Russian. Because nothing has ever said "good times" like illegal corn liquor from the Appalachians. This deck's court cards feature some of history's most famous moonshiners.

WhiteWolf. Vodka at its premium, branded especially for the Prohibition Box Set, and cards with a design "as stark and crisp as the Russian Tundra." The WhiteWolf series goes for austerity and minimalism, incorporating half-shaded pips, single-line drawing courts, and a speckled paper overprint.

52Proof. No 1920s liquor laws would be sufficiently broken without whiskey. The 52Proof deck depicts a giant oak tree on the front of the tuck box and seal to symbolize the aging process of fine bourbon maturing in charred oak barrels. This oak motif carries through the rest of cards.

Watermelons. You poor bastards. Always on the receiving end of novelty weapon violence. The Gotcha Cap. The Unbreakable Slugger Umbrella. The <a href="https://www.dudeiwantthat.com/gear/weapons/blade-driver-crossbow.a

More mysterious than how Pure Smoke works or what it's made of is why the spontaneous appearance of smoke is so cool. In other contexts, such as while baking, performing basic electrical upgrades, or 10 miles into your...

We've seen levitation around here before. A lot. In speakers. In lamps. In freakin' bonsai trees. But the Levitating CUP still make

Been looking for the perfect Halloween costume...for your shotgun? I don't think Dragon's Breath Powder (also known as Lycopodium Powder) promotes itself as the ideal filling for 12-gauge ammo, but there's clearly no...

Who wants some undiluted geekery? code:deck is a standard set of playing cards individually described by rank and suit in one of 13 different programming languages. As maker Varianto:25 points out, the cards should arouse...

Since the holidays are over, seems like we should be focusing less on the 7 Deadly Sins in our playing cards box sets, and more on poker nights and COVID-quarantined hours of solitaire with suits sporting the 7 Heavenly...