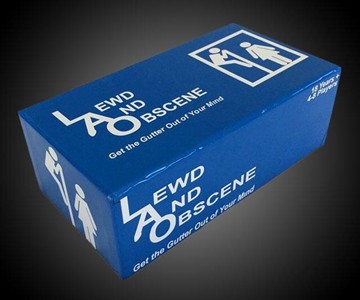 Lewd and Obscene, according to creator Anthony Annese, is what would happen "if Urban Dictionary and Balderdash had a one night stand and the condom broke." Testament #1 to the validity of that statement: mentally rotate the game's LAO logo 180 degrees. What do you see*?

Testament #2 to the validity of that statement: Lewd and Obscene is comprised of cards printed with words and their definitions. One player draws a card and reads just the word out loud. The other players then make up and write down their own definitions, with the intent of convincing the rest of the group theirs is the correct one. One card contains the word "Emeril." It means "The act of ejaculating into your hand after intercourse and throwing it in a woman's face while yelling 'BAM!'"

Huh. And I thought it was awkward playing Cards Against Humanity with my grandma.

The Lewd and Obscene box includes 195 cards with pre-selected phrases and definitions. Note that not all words are profane or sexual in nature. Some just sound like they are, and are therefore easy material for the dirty, dirty minds of human beings. The set also throws in 5 blank cards for players to add some of their own lexicographical smut.

Official Lewd and Obscene gameplay begins with a "neutral" player choosing a card and reading its word out loud. As the players participating in that round write down their best definitions, the neutral player copies down the word's true meaning. Once slips are submitted the neutral player reads all definitions out loud and each player votes on which one s/he thinks is correct. If you vote for the correct definition, you receive a point. For every vote your definition receives, you also receive a point.

Lewd and Obscene is a top Dude Gift for a Party pick.

Flipping the bird becomes much more than a cheap gesture with this Middle Finger Toilet Paper Holder. Instead, Pygmallionaire's 3D-printed and hand-painted metallic design is a functional luxury!...

A Book For a C*nt

I like how right underneath the A Book For a C*nt heading in its Etsy listing, there's the denotation that this product is a "Bestseller." Ha! I guess everyone has a c*unt in their life they need to buy A Book For a C*nt...

No F*cks Given: Naughty Words to Live By

Sarah Knight brings all her F*cks together in No F*cks Given: Naughty Words to Live By. The book is a compilation of the "no-bullsh*t, life-changing advice" she offers in her 5 previous F*ck-filled books: The Life-Changing...

Cuss Collar - A Collar that Curses When Your Dog Barks

Though the Cuss Collar sounds like a punishment for your foul-mouthed kids - or your husband - its application and function are a lot more literal. The Cuss Collar is a dog collar that swears whenever your dog barks...