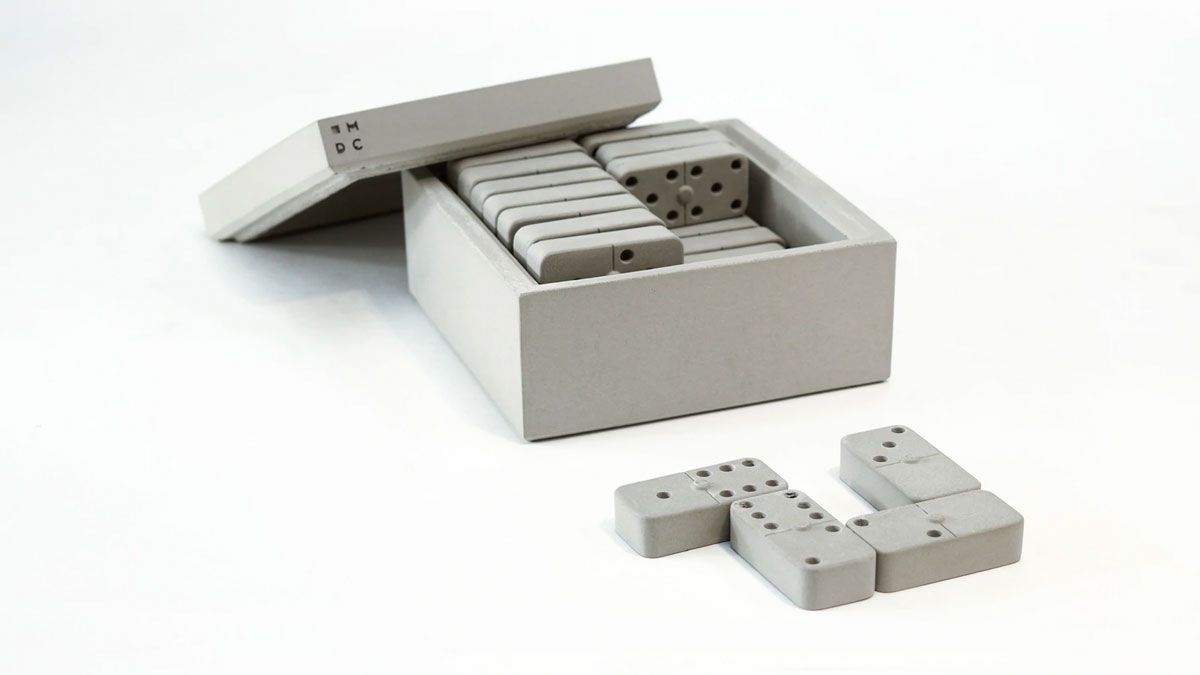 $85
from IntoConcrete »
Check It Out

Wonder what kind of damage concrete dominoes do when you knock them over. This Juego de Domino set is made by MDC, a concrete design studio based out of Mexico City. And, perhaps for the first time in contemporary history, it appears to be a domino set intended for actual domino gameplay, rather than domino run-building and toppling.

Which brings us to our next question: do any of you dudes or ladies out there know how to play dominoes? This dude sure as sh-ement, sand, water, air, and gravel doesn't.

But while neither building a domino run, nor playing a game of dominoes may be in the cards tiles for MDC's Juego de Domino, the modern, minimalist concrete set and its container are works of art as much as they are entertainment. And perhaps interactive in both senses, if you set your set out on display, and allow those who pass to stack, build, and contribute to an ever-changing concrete domino sculpture.

Ambient Glow Technology's Glow Stones combine with concrete--they either mix in freestyle or nestle in methodically--to create everything from illuminated pathways to Fairyland to sculpted lawn ornaments to mood-setting...

Need a concrete answer? Want to give someone a hard No? Write your requests and responses with a Module concrete pen or pencil from 22STUDIO. The writing tools come in 3 Module styles, Rollerball Pen, Fountain Pen, and...

It's all smash 'n' score whether you're the recipient or the giver of a BRIK concrete block gift. With a BRIK, the packaging is half - maybe more - the fun, though those who take a BASH sledgehammer to their gift wrap...

I've heard of concrete jungles, but these modern planters are the first concrete islands I've seen. And unlike the cold, soulless jungles, Bella Vista Canyon's Concrete Islands are brimming with life - succulent life!...

Need to cover your crack? Driveway Medic says it will prevail where liquid crack filler falters. A roll of self-adhesive asphalt repair fabric, the patcher applies in seconds via a simple peel-and-stick method, covering...

The Factory, Material Immaterial Studio's latest concrete rolling ball kinetic sculpture, is a nod to Brutalist architecture, and our desire to own stuff we can fiddle with to spur creativity, or just take a mental break...

My 5th grade teacher often asked me if my head was filled with concrete, and at the time I got the sense it was an insult, but now that I see the beatific masterpiece that is 22 Design Studio's 4th Dimension Concrete...

It's about damn time the crap my mama sets out around my (fine, her) house and calls "art" also possesses the ability to charge my phone and iPad. O'Dea Designs' Concrete Charger is the first in their forthcoming series...

The School of Hard Blocks is a set of 12 alphabet blocks modeled after the traditional wood children's blocks, but made of concrete. And made for adults who need to learn, ponder, or build up their own ABCs. Adultery...