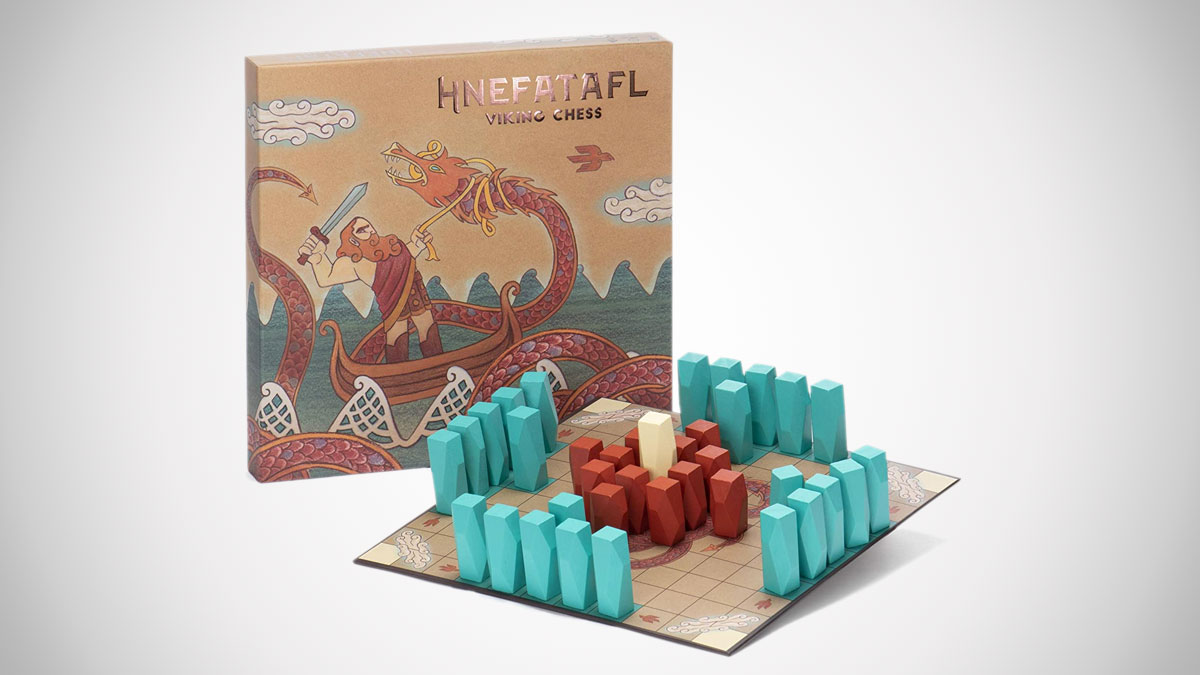 Vikings, Valhalla hopefuls, Beth Harmon of The Queen's Gambit, Hnefatafl has one question for you: are you ready to fight for your king?

"Viking chess set" is just a loose description of Hnefatafl, which is actually its own ancient and authentic game created in Northern Europe during Viking times. It peaked in popularity during the Dark Ages, and hasn't been played much since the early 18th century, but if 1980s fashion could make comeback in 2020, why not revisit the 680s Viking entertainment on game nights in 2021?

Hnefatafl gameplay is more abstract in strategy than chess, though it still features 2 players competing for a king. One player represents the defender pieces and the other the attackers. The board is the battlefield of a city under siege, where defenders fight to get the king off the field as attackers move to capture him.

Hnefatafl provides 37 wood pieces, 12 x 1.5" defenders, 24 x 2" attachers, and 1 x 2.5" King. The 10.5" square gameboard features the "famed and feared" World Serpent, and has a single-piece construction, so there won't be any darned fold interfering with the smoothness of your Ragnarok.

Well, really it's a carbon fiber-ish folding chess, checkers & backgammon set. The game is made of MDF, but has a "carbon fiber tech material veneer." So not solid carbon fiber, and even the supposed-to-be-carbon-fiber...

Of course the Batman Chess Set costs nearly $800. The Dark Knight is a fancy superhero. The fanciest superhero of all, I would say. And check out how dashing he looks in fine pewter and diecast metal. Villains the Joker...

Think your chess skills are the cat's meow? That your opponent is barking up the wrong tree...or scratching up the wrong post...saying they can beat you? Then put your feline kings and canine queens where your mouth is...

This ammunition inspired chess set is made using spent .223 bullet shell casings. One side uses steel casings and the other side uses brass casings. The kings and queens are the only 4 pieces with an actual bullet re-set...

The Lord of the Rings Chess Set

Every detail is authentic, richly realistic and true to the Academy Award winning epic film. The board is a magnificent work of art, detailing the story of Frodo, the reluctant hero of The Shire, and the friends and foes...

We can all appreciate the creative skill, labor, and craftsmanship Jim Arnold poured into his elaborate, entirely hand-carved War of 1812 Chess set. But those of you out there who actually know what the War of 1812 is...

Welp, judging by the bones fossilized in the platform uplifting this chess set's glass board, the biggest dragons have already been slain. Now all I gotta conquer are the baby fire breathers, and in all likelihood their...

Obviously I like this chess set because most of its pieces appear to have leapt right out of my VHS cassette of Beetlejuice, one of the best 80s movies ever, as evidenced by the fact that I am saying so right now. I sure...

Now here's a new spin on smart lighting. Lasermad says their stellar Nixie Chessboard is the first and only Nixie tube-powered chessboard in the whole world, and I believe it. Who has the creativity to even come up with...