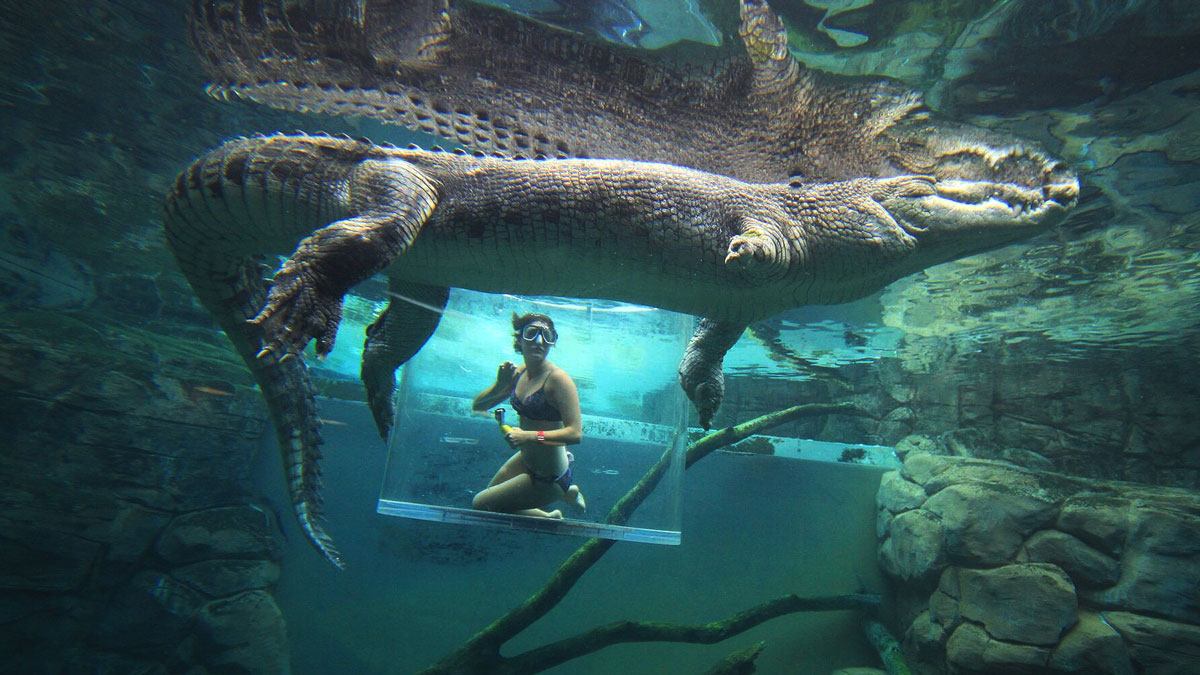 I like to flirt with death every now and again. Provided death does its return eye bats and tooth flashes from the other side of an impenetrable fiberglass cage, anyway. Crocosaurus Cove Darwin in Australia's Northern Territory has over 200 crocodiles stomping its yard, including aquariums housing some of the largest saltwater crocs in the world. But its true--and I mean this in the best sense of the words--tourist trap is the Cove's Cage of Death, a solo or two-person crocodile dive that meets man and 16+-foot beast nose-to-nose at water's edge, and then 6 feet under.

Now in its fifth year of operation, the Cage of Death delivers shots of adrenaline to the heart daily, typically without cardiac repercussions or actual death. The cage's cylindrical design allows for 360-degree reptile interaction, and within the past 6 months, Crocosaurus has introduced a Cage Croc Feed, wherein the crocodile is fed something other than its homosapien spectators during each Cage of Death dive. Hmmm, I know reptiles don't rank too high in the smarts department, but I wonder if being fed every time they have to share their swimmin' holes with two-legged vertical beings conditions them to think fondly of humans because their presence means mealtime, or to associate humans with eating, and thereby crave eating humans.

I know, Mama, I've always been so philosophical. Even as a young boy when I pondered whether ketchup is made out of tomatoes, or tomatoes out of ketchup.

Crocosaurus Cove's Cage of Death dives last 15 minutes a pop. The enclosure is operated by an overhead monorail that first suspends inhabitants above the crocs, and then lowers them into the pen, and then hopefully doesn't break before reascending to a location out of reach to the jaws o' 5,000-pounds-per-square-inch bite pressures.

Cage of Death prices for one ($158) or two ($116) people include full-day entry to the Cove. The Cage operates 10 times per day, and anyone 15 or older can experience the thrill/horror of Chopper, Denzel, Houdini, and Bess. There have to be weight restrictions too, but since no one in Australia is fat Crocosaurus Cove didn't think to include that information on their Website.

Diving free of cumbersome tanks and lines, and with an unlimited underwater air supply? That's like...like...making love out of nothing at all. Unfathomable! And although human gills are indeed a ways away from sporting...

It's not a set of human gills, but at least Tribord's Easybreath snorkeling mask doesn't require technology that hasn't come forth from hypothetical existence yet to work. This will make it somewhat easier for two-legged...

And a watermelon takes it in the gut again. Like so many other weapons demos we've seen around here (Gotcha Cap, Throwing Card Knives), the effects of the Wasp air injection knife have been exacted upon a watermelon...

TRITON, the human gills design concept I showed you dudes here 2 years ago (and which many of you had mucho to say about in our comments section) is running a crowdfunding campaign to actually produce the equipment. TRITONs...

Supermarinovation asks, "Have you ever been snorkelling and seen something incredible below you, but haven't been able to get to it before your breath runs out?" To which I say, "Sure." And follow up with, "And have you...

Many of us dig communing with corals and fishes and hot merpeople lookin' for a good time 40 feet beneath the ocean's surface, but suited up SCUBA-style in bulky BC vests and heavy oxygen tanks sort of encumbers the experience...

Bite down on a Scorkl and you'll score 10 minutes of untethered underwater breathing. No snorkel confining you to a foot below the water's surface, and no loading up with a 35-pound SCUBA tank and BC like an aquatic pack...

Ever wondered what it might be like to have webbed fingers? Wonder no longer. These durable latex rubber gloves will have you flying by other frogs in the water. Perfect for SCUBA diving, swimming, surfing, and even jumping...

The Exolung is a prototype for an underwater breathing device that gives shallow-water divers the freedom of a SCUBA, without all of the elaborate equipment. More probably, it will be the snorkelers who swim towards Exolung's...

Though still just a concept, it looks like the D-Mask, a SCUBA mask with smart features that fits over the diver's whole face, could take the Tribord Easybreath snorkeling mask to new heights depths...

While they don't boast the superhero aesthetic of Darkfin Gloves--more like the hand-got-tangled-up-in-a-jellyfish aesthetic--these Silicone Swimming Fingers consume a lot less room both in your bag and on your body than...